Go There: A Weekend Getaway to Omaha, NE

From savoring stacked Reuben sandwiches and stellar ramen to strolling one of the nation's best zoos, Omaha is a must-see Midwest charmer.

By Patricia Kaowthumrong on November 15, 2022 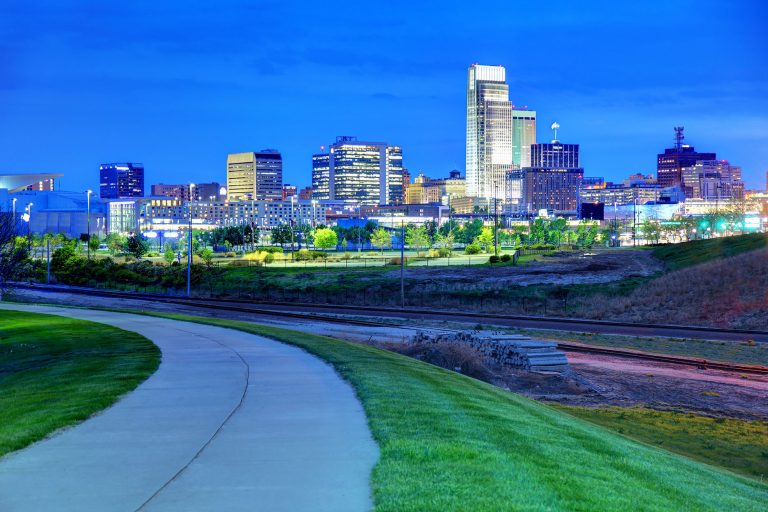 In the mid-1850s, Omaha’s reputation as a stop for pioneers migrating to the coast earned it the nickname “Gateway to the West.” Since then, the city has grown into Nebraska’s largest metropolis — a thriving hub for agriculture and business that’s home to the headquarters of giants such as Berkshire Hathaway, Kiewit Corporation, and Mutual of Omaha. Since the University of Nebraska-Omaha and Creighton University also have campuses within city limits, there are also blossoming culinary and arts and culture scenes fueled by an energetic population of students and young professionals. Here is a guide to the Midwest gem — a perfect-sized city to explore in a weekend.

The Kimpton Cottonwood Hotel, which opened in 2020 in the Blackstone district on the outskirts of downtown Omaha, is a revival of the Blackstone Hotel. The property was originally built in 1915 and became a well-known pit stop between San Francisco and Chicago from the 1920s to the 1970s. While the Cottonwood brims with boutique features such as a beautiful pool and a chic basement bar centered around a whimsical artificial tree — there are several nods to the hotel’s storied past, including the on-site Committee Chophouse, which is named after a group dubbed “the Committee” that hosted a weekly poker game at the property.

If you prefer to stay in the heart of downtown Omaha, there are also many options. The Magnolia Omaha — housed in a 1923 building inspired by the Bargello palace in Florence, Italy — is another historic beauty. The spacious, light-filled rooms are a comfortable home base within walking distance of attractions such as the Orpheum Theater, stroll-worthy Riverfront and tons of shops and restaurants.

Other properties to consider in the area include the Farnam, Autograph Collection, a hotel with a swanky terrace bar offering killer views of downtown Omaha, and Hotel Deco, which blends art deco touches like gold and chrome accents with modern amenities such as plush bedding and spa showers.

No trip to Omaha would be complete without spending time at the Henry Doorly Zoo and Aquarium, where you can get lost in 160 acres of immersive habitats inspired by landscapes across the globe. Spot meerkats and ocelots as you walk amid a 30-foot sand dune in the Desert Dome, located in the world’s largest glazed geodesic globe; spy on elephants, giraffes and cheetahs in the Scott African Highlands exhibit; and see penguins swim in icy waters at the Suzane and Walter Scott Aquarium.

To learn about the history of Omaha and the surrounding region, venture to the Smithsonian-affiliated Durham Museum, situated inside the city’s restored Union Station. Visitors can check out exhibits chronicling the lives of Plains Indians, learn about the experiences of immigrants who settled in Omaha and view models of workers’ quarters from the late 1800s. For lovers of the arts, the Joslyn Art Museum is a must-visit; the institution has an impressive collection of 19th and 20th European and American art, including works by Edgar Degas and Winslow Homer.

Be sure to stretch your legs on the Riverfront, a freshly renovated trio of connected parks in downtown Omaha. The beautifully manicured green spaces have everything from sprawling giant-slide-equipped playgrounds and shady walking paths to inviting lounge and picnic areas.

Your culinary tour of Omaha starts in Old Market, where the brick-paved streets are lined with shops, eateries and art galleries. Next, stroll down a mural-bedecked and ivy-vined alleyway to find Ika San Ramen, a hot spot for slurping bowls of noodles swimming in flavor-packed broths (try the cilantro-zinged Mary Jane with chunks of chicken char siu) and knocking back sake bombs. After dinner, head to Yokocho, a petite drink den tucked in a back room inside Ika San, for a cheekily named cocktail like the lavender- and lychee-forward Let’s Get Fizzical.

To savor seasonal fare, snag a table at Gather, a farm-to-table restaurant serving contemporary American plates; some ingredients, such as arugula, basil and kale, are even sourced from the establishment’s on-site vertical farm. Hankering to satisfy your carnivorous side? Make a reservation at the Committee Chophouse inside the Cottonwood or J. Gilberts Restaurant in the Capitol District — both of which are known for their delicious ribeyes, sirloins and filets.

In the revitalized Blackstone District — where a bevy of new culinary businesses have set up shop — pop into Coneflower Creamery for scoops of butter brickle, salted caramel, and vanilla bean ice cream. Or grab brunch at the cheerful Early Bird Restaurant, where the build-your-own pancake flights and Hash Holes (hashbrown and cheese croquettes) are worth waking up for.

The Old Market district brims with boutiques, bookstores and antique and vintage shops. Get lost in mazes of displays stocked with Pez dispensers, gummies and fudge at Hollywood Candy, a sweet shop that also houses small vintage candy displays and a room of pinball machines (bring your quarters). Purchase quippy Midwest-themed apparel and knickknacks at Raygun (that “Ope, Sorry” shirt is calling your name); browse slick sneakers and streetwear at the Work Shop; and peruse one-of-a-kind finds at the Antique Annex, Fairmont Antiques and Mercantile and Flying Worm Vintage.

While exactly where the Reuben was invented in Omaha is debatable, the sandwich’s culinary icon status is undeniable. Restaurants across town take pride in producing the ubiquitous stacker, traditionally composed of corned beef, Swiss, sauerkraut and Thousand Island snuggled between two slices of pumpernickel or rye bread.

For a throwback rendition, try the one at the Orleans Room at the Cottonwood, where that legendary group of poker players is rumored to have dreamed up the sandwich as a midnight snack. Other tried-and-true spots to get your fix include the Old Mattress Factory (or “the Matt”), an expansive bar and grill with more than 50 beers to choose from, and Crescent Moon, a no-frills watering hole you can also order Reuben egg rolls and twice-baked potatoes.