New Mexico is a state rich in history, tradition and culture. 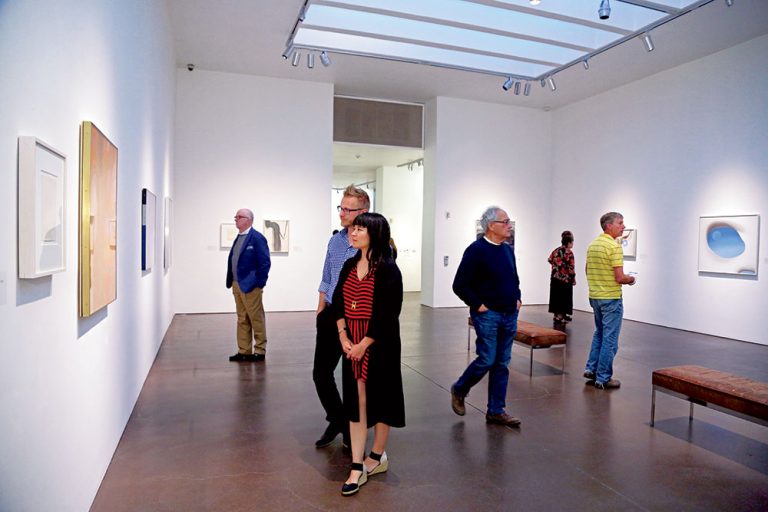 In New Mexico, the arts are not just about creative expression – they are also about building strong communities.

The state has a lengthy history as an arts epicenter, beginning centuries ago with traditional indigenous art. Today, New Mexico has more working artists and arts facilities per capita than any other state.

“The arts are often overlooked as a way to develop economies and build communities,â€ says Rose Eason, executive director of gallupARTS, an organization that has a twofold mission: to engage the community with the arts and provide a way for artists to show and sell their works.

That role is crucial in a county where one in four residents is an artist.

Through the efforts of gallupARTS, supported by the Northwest New Mexico Council of Governments, the city of Gallup qualified as a state arts and cultural district. gallupARTS runs a full calendar of public events, exhibits and workshops, plus the LOOM Indigenous Art Gallery, which is managed by an advisory council of native artists.

Eason is especially proud of the way Gallup’s local artists, many of them from the nearby Navajo and Zuni reservations, are tackling tough issues such as alcoholism and homelessness.

“They’re showing a lot of cutting-edge work, both in terms of technique and relevance,â€ she says. “The reception has been overwhelmingly positive, so I think it’s shown Gallup that art can foster dialogue and progress in the community.”

The Santa Fe Art Institute (SFAI), founded in 1985, advances similar goals. The institute’s flagship residency program has hosted more than 1,200 artists since its inception. In 2013, SFAI decided to focus the residency program on social justice, and residencies became tuition-free in 2017.

“We believe in artists as leaders to provide a real sense of our humanity,â€ says Jamie Blosser, SFAI’s executive director. “We eliminated tuition to broaden access and make sure we’re providing opportunity to artists from diverse backgrounds.”

Past residency themes include food justice, immigration/emigration and water rights. The goal is to encourage cross-disciplinary engagement between artists as they complete themed projects.

SFAI also offers the Story Maps Fellowship, a nine-month program that pairs young artists of color with mentor artists. The artists and their mentors collaborate with government departments and other non-arts organizations to create stories, maps and other artworks of the community.

“It’s a new way to invest in the capacity of young creative people, to give them more of a voice and a chance to learn more about their civic systems,â€ Blosser says.

“New Mexico has a long-standing tradition of interest around traditional art. With all the new excitement around contemporary arts, it’s a nice juxtaposition. And it ties into the studio tour: The old model of four white walls in a gallery just doesn’t work as well anymore,â€ Hubbard says.

He believes that studio tours, a staple of New Mexico’s arts scene, benefit both the artists and their patrons. Particularly in rural areas, sales made during a weekend studio tour can provide several months’ worth of income – the difference between being a hobbyist and making a full-time living as an artist.

“New Mexico has a long-standing tradition of interest around traditional art. with all the new excitement around contemporary arts, it’s a nice juxtaposition.”

Patrons, by turn, get access to pieces that are not available to the general public, plus a more intimate connection to the artist and the work. And that connection, ultimately, is what the arts are all about.

“Any time someone buys someone’s work, they’re supporting the arts. It doesn’t have to be a large contribution to a nonprofit or a museum,â€ Hubbard says.

The Georgia O’Keeffe Museum in Santa Fe is dedicated to perpetuating the artistic legacy of the renowned artist and to the study and interpretation of American Modernism. It is the first art museum dedicated to the work of a woman artist of international stature. Its permanent collection of O’Keeffe works is the largest of any museum in the world and includes more than 1,000 of her work and extensive archival materials. The museum building, opened in 1997, was designed by architect Richard Gluckman, whose projects have included the gallery addition at the Whitney Museum of American Art’s permanent collection in New York City and the Andy Warhol Museum in Pittsburgh.

The Anderson Abruzzo Albuquerque International Balloon Museum takes its name from Albuquerque balloonists Ben Abruzzo and Maxie Anderson, who with partner Larry Newman, completed the first nonstop crossing of the Atlantic Ocean in a gas balloon in 1978. The museum’s exhibits combine unique historic artifacts with modern multi-media technology to show the art, culture, science, history, sport and spectacle of ballooning. Each October, thousands of visitors come to Albuquerque for the Albuquerque International Balloon Fiesta, which takes place at the 365-acre Balloon Fiesta Park. The event showcases more than 700 balloons and is billed as the world’s largest balloon festival.