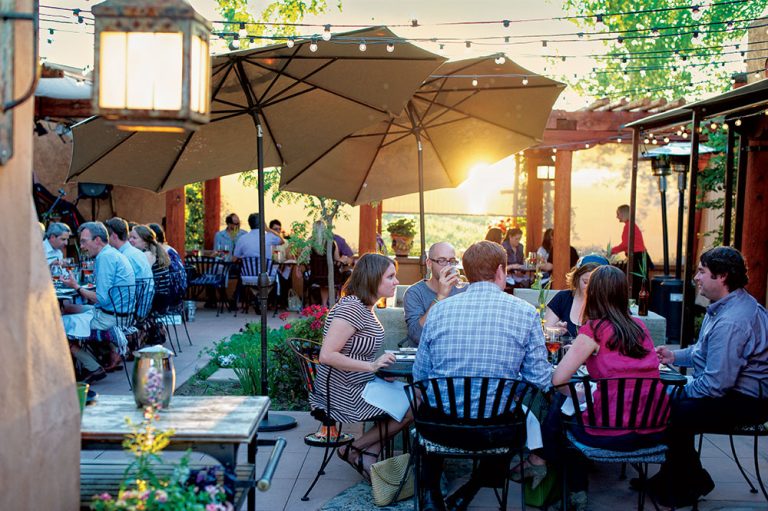 Most chefs will tell you that one of the best ways to create  a savory meal is through slow-cooking, allowing the flavors of the various ingredients to gradually mix and meld into a delectable dish.

Well, food in New Mexico has been simmering for more than 400 years, bringing together a blend of Spanish, Native American and Mexican influences to produce a rich depth and diversity in local cuisine in every part of the state.

“There are a lot of deeply rooted cultural influences in this state,â€ says New Mexico native Jonathan Perno, executive chef of Campo at Albuquerque’s Los Poblanos Inn, and a James Beard Award semifinalist in 2019. “We’ve had all these different cultures move through here, including some from Europe. So there is a wealth of things we get to draw from. We have a deep well.”

Not Just a Peck of Peppers

Any talk of New Mexican cuisine begins with the beloved chile pepper – both red and green – whose origins in the region date to the 1580s. This is butter on a vine, an ingredient that can be used in almost everything, from sauces and soups to dressings and fillings. And, of course, they can be enjoyed all on their own.

“Chiles are our lifeline. We’re addicted to them,â€ Perno says with a chuckle. “They’re extremely versatile when it comes to cooking. There are all these facets of what you can do with them. And they have different nuances depending upon where they’re grown in the state.”

Indeed, the popular chiles grown in the rural community of Chimayo, approximately 30 miles north of Santa Fe, are distinctly different from the ones produced in the southern towns of Las Cruces, Socorro and Lemitar.

“There is a versatility and flavor profile from the pepper in this state that you cannot truly achieve from chiles that are roasted and peeled in other parts of the country,â€ Perno says.

“Chiles are our lifeline. We’re addicted to them. They’re extremely versatile when it comes to cooking. There are all these facets of what you can do with them.”

But there is so much more to New Mexican cuisine that just the chile. Perno points out that the rich soil of the Rio Grande River corridor, which runs the length of the state, is fertile ground for growing a wide variety of fruits, vegetables and even spices.

“There are a lot of different food producers along that corridor,â€ Perno says. “Rio Grande Valley cuisine is not something a lot of people know about, but it’s a great environment for things you might not expect (to come from New Mexico) like squashes, leafy greens and ginger.”

A Plateful of Restaurants

As a result of this bountiful buffet of food choices, the cuisine scene in New Mexico is both wide and deep.

Perno is one of several chefs in the state to have received national attention in recent years. This list includes MartÃ­n Rios, chef at Restaurant MartÃ­n in Santa Fe, who also was named a James Beard Award semifinalist in the Best Chef: Southwest category.

Speaking of Santa Fe, the city has become something of a food mecca, home to more than 400 restaurants. With a population of approximately 84,000, that averages to about one restaurant for every 200 people. In 2018, Thrillist magazine named Santa Fe one of the 15 American Cities That Secretly Have Great Food Scenes, noting that it offers “pretty much everything you love, done the best it can be done.”

No matter where you go in the state, there are plenty of places focused on local foods. Back in Albuquerque, for example, Farm & Table puts a New Mexican twist on its American cuisine by using locally sourced products in approximately 80 percent of its ingredients. Housed in a historic stagecoach stop, Farm & Table cultivates a two-acre produce farm and a nine-acre alfalfa farm located directly behind the restaurant.

Finally, in order to wash down all this succulent fare, there are more than three dozen independent beer operations scattered throughout New Mexico, including microbreweries, brewpubs, brew houses and taprooms.

“Our food doesn’t just revolve around great chiles. It revolves around the people and the product they are producing,â€ Perno says. “We are all trying to show what New Mexico has to offer.”