“It’s incredible: other dimensions, other times, a secret story..." 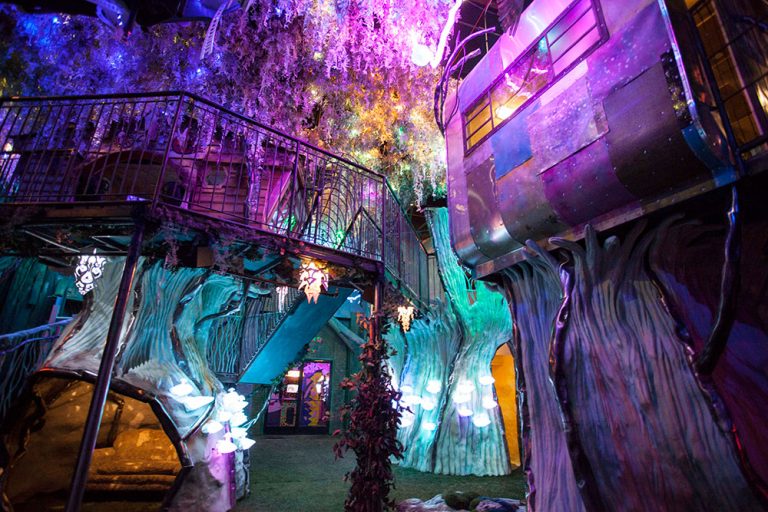 Most museums you’ve been to probably have stern warning signs: “Do not touch the art.”

But Meow Wolf is the antithesis of most museums. At this interactive Santa Fe fantasyland where art meets sci-fi, not only can you touch the artwork, but you’re encouraged to enjoy a truly immersive, multi-sensory experience.

So, yeah, go ahead, swing open a refrigerator door and climb into another dimension. Or crawl through a fireplace mantle to discover a hidden portal – because in the popular House of Eternal Return exhibit, it’s your imagination’s task to roam free and come up with a good ole’ conspiracy theory about how a family disappeared from the home. Unraveling the storyline is all part of the experience when you walk (and crawl and creep and poke and plod) through this rad museum, which has a psychedelic bent and is bursting with a kaleidoscope of color.

Meow Wolf began as an art collective in 2008. A group of artists wanted to do something wildly different. They had a desire to create immersive experiences for their audiences. They wanted to let their creativity explode.

A new documentary – which dives into how Meow Wolf grew from an anarchic art collective to a multi-million dollar entertainment company that it is now rapidly expanding – interviews the founding artists who say they wanted to shake up Santa Fe’s art scene. Many felt like they were on the outside of the art market, looking in.

In 2016, with funding from Santa Fe resident and “A Game of Thronesâ€ author George R.R. Martin, Meow Wolf took over an abandoned bowling alley, transforming it into a 22,000-square-foot entertainment complex.

Martin, in the documentary, shared how he was wooed by the Meow Wolf concept: “It’s incredible. Other dimensions, other times, a secret story.â€ It pushed all of his buttons, he says.

Since its debut in Santa, Meow Wolf has been winning over fans with its trippy funhouse vibe. A behemoth robot welcomes guests in the parking lot, so you know you’re in for an out-of-this-world experience when you step inside.

The Santa Fe installation has been described as a dream. A trip down Alice in Wonderland’s rabbit hole. A Salvador Dali painting. A wild video game that comes to life.

Really, you’ll have to visit it to come to your own conclusion.

You’ve got lots of options for experiencing the glory that is Meow Wolf. Its permanent digs in Santa Fe just got fresh new exhibits, including one from Australian artist Pip & Pop who created an installation that feels like you’re cast in a real-life game of Candyland (yes, dreams do come true).

But Meow Wolf is also growing and expanding, with permanent locations in Las Vegas and Denver, and an art theme park ride in Denver. They also just announced their next project will be in Phoenix, with the opening of art immersive arts hotel. That way you can dream inside a dream. So meta, right?

Oh, and curious about how the name Meow Wolf came about?

At the very first meeting of the collective in 2008, the artists each put two words into a hat. Then they picked two random words out of the hat: Meow Wolf.