You Won’t Believe How These Cities Are Now Combating Graffiti

A surprising new approach to an old problem 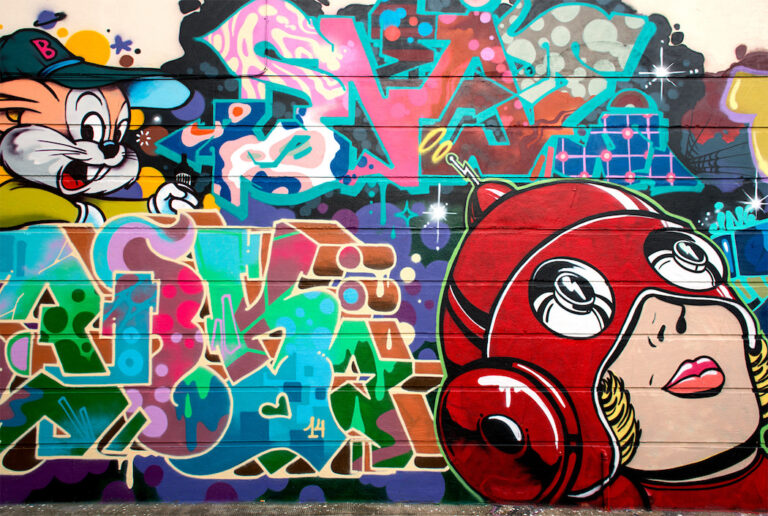 Courtesy of Rob Schofield under a CC 4.0 license.

The quality of any town is made up of a million or more things, from big ones like cost of living or strength of the employment market, to the smaller ones like mass transit or walkability. One of those quality indicators is a town’s aesthetics. That can come in the form of green spaces, well-designed and managed properties, and, in the case of Castle Rock, Colorado, some public art with a surprising purpose.

Since 2014 the town has been benefiting from a program called Art Around the Rock, created by Officer Seth Morrissey, a member of Castle Rock’s special operations unit. The community art project puts into practice Crime Prevention Through Environmental Design (CPTED). Local artists, including another police officer, Renee Tremaine, were assigned areas with a high likelihood of graffiti and asked to paint a variety of murals. Twelve bridges and tunnels in the city were chosen.

The art isn’t just intended to look pretty—it’s a part of the CPTED principle of beautifying areas to discourage abuse. CPTED is a method that police departments, urban developers, and city planners use to discourage criminal behaviors through the design of public spaces and environments. Some CPTED methods can be functional, like installing thorny shrubs in front of windows that might likely be broken into.

Others are less concrete, like Castle Rock’s plan, which works on the idea that would-be graffiti artists are less likely to paint over another artist’s work. Instead of repeatedly paying to have graffiti removed, Morrissey’s project allows artists to beat vandals to the punch, decorating the spaces with community-related murals like the group of crows emerging from an image of Castle Rock’s namesake, or local artist Janene DiRico-Cable’s nature scene that drew inspiration from indigenous wildlife.

A Theory With Positive Results

CPTED has been around a while. It traces its roots back to criminologist C. Ray Jeffery, who first coined the term in his book Crime Prevention Through Environmental Design in 1971, but was mostly ignored by the crime prevention community until the 1980s when it was boosted by concepts like James Q. Wilson and George L. Kelling’s “broken windows” theory. The broken window theory postulates that the nicer a neighborhood looks, the better its residents will take care of it. That theory is exactly what the Art Around the Block builds on.

CPTED has grown in popularity, as many studies have shown neighborhood improvements based on its principles to be effective. New York City police also used the broken window theory as a basis for some procedural changes in the 1990s that ultimately resulted in a huge reduction in crime. But it also has had its detractors, who point to the fact that it’s nearly impossible to prove that CPTED alone has any affect on crime. For towns like Castle Rock, though, it’s worth the risk, and so far it has worked. Time will tell for how long.

Castle Rock isn’t the only municipality looking for new solutions to graffiti. In 2008, Portland, Oregon passed a City Resolution mandating that its city bureaus and the Portland Development Commission would, “…adopt and implement CPTED policy guidelines…for all multifamily residential housing constructed, owned, or financed by the city.” The policy even applied to remodels and upgrades of city buildings.

Seattle, Washington also uses CPTED design principles to guide decision-making. This January, the municipality was debating the merits of a proposed construction project downtown. During the Design Board’s discussion, one speaker used one of the most common CPTED principles (and identified it specifically as CPTED) to argue against the projects’ approval, as the construction would include a courtyard that would be unlit for most of the year. In addition, Seattle also has an official CPTED policy, and even provides free seminars from time to time for area residents.

Some of CPTED’s principles may by hard to prove beyond a shadow of a doubt, but what’s certain is that it’s a worthwhile approach to creating better, safer communities, and especially in urban residential areas. And for towns like Castle Rock, it can be a great way to make sure that their downtown stays beautiful for a long, long time.