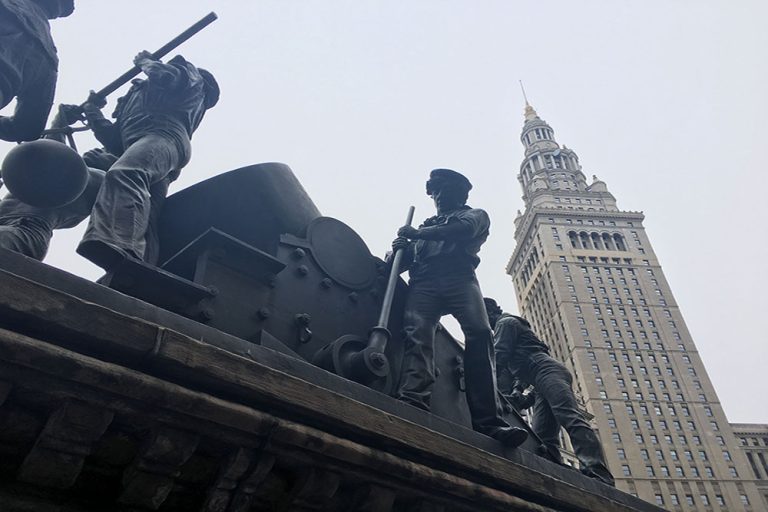 When we moved to the Cleveland, OH, suburbs several years ago, most of what I knew about the city revolved around its professional sports teams. And it’s true that driving through the city, sports definitely have a larger-than-life presence – literally – from the 10-story visage of NBA player LeBron James draped on the side of a building to the various stadiums clustered around downtown. What I didn’t expect to find is a thriving art scene with an eclectic mix of creative hubs around the city. From art museums that rival what you’d find in major metropolitan cities, to cool hideaways where you can watch artists at work, Cleveland’s creative side is worth exploring.

Stepping into the Cleveland Museum of Art, I was instantly reminded of my days as a kid at New York City’s Metropolitan Museum of Art. Opened in 1916, the Museum recently underwent a $320-million renovation that brought together its two main buildings via a new, glass-covered atrium cool enough to earn a starring role as the SHIELD Headquarters in “Captain America: The Winter Soldier.” So along with checking out the extensive art collection, including the likes of Picasso, Monet and Rodin, I must admit also taking a selfie in the atrium with my best Avenger pose. Even better – admission to the museum is always free, meaning you can come and go as you like.

Ten Things to Do in Cleveland, OH

Where Artists Go to Play

Down a nondescript side street in the Gordon Square Arts District, 78th Street Studios once housed a car factory. Today, the 170,000-square-foot complex includes art galleries, a music recording studio and a performance space. Visitors are welcome at the various galleries during their regular hours. But to really get a sense of the space – and Cleveland’s art crowd – come during the free Third Fridays where the studios open up for the evening, artists and musicians mingle with the crowd and it’s pretty much a party all about art (there’s even a whole area devoted to vintage pinball machines. And yes, you can play on many of them).

Michael Jackson’s sequined glove? I’d call that art. Ditto on Elvis’s gold tuxedo. And the sounds of The Beatles? Definitely. The Rock & Roll Hall of Fame packs in decades of rock memorabilia within its glass pyramid perched next to Lake Erie. You’ll walk through the roots of rock and meet legends along the way.

16 Reasons to Move to Cleveland, OH

Known as “MOCAâ€ to locals, the Museum of Contemporary Art Cleveland looks like some sort of enormous space-age cube dropped in the middle of a city street. The reflective glass on the outside becomes a piece of art itself, at times mirroring the buildings around it to the point it almost melds into the background. Almost. Inside, the museum showcases various exhibits of up-and-coming artists, both regional and national.

In the heart of downtown, the Soldiers’ and Sailors’ Monument sits in the midst of some of Cleveland’s landmarks, like Tower City. The 1894 monument commemorates Civil War veterans and includes a 125-foot column and a memorial you can tour inside. The monument is just one of several sculptures, both modern and classic, that dot the city.