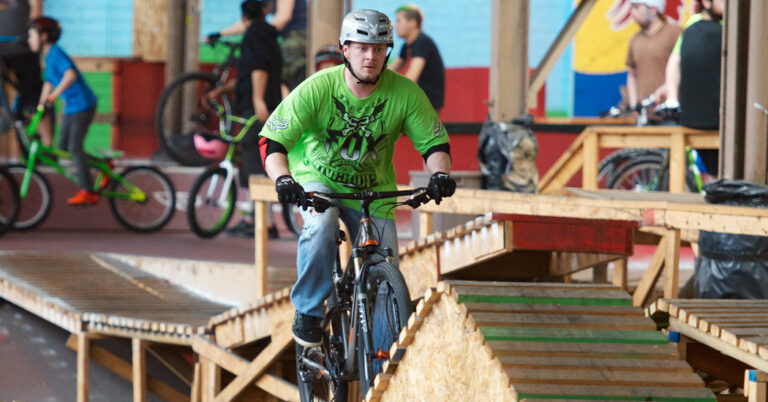 Mountain bike and BMX riders love the great outdoors. But when such phrases as polar vortex, lake-effect snow and wind-chill factor creep into the forecast, even the most dedicated riders have a tendency to park their bikes and sit out the cold winter months. If only there were a place to bike indoors.

Ray Petro used to be one of those frustrated, home-confined cyclists. But during a particularly frigid Thanksgiving weekend in 1996, Petro came up with the idea of taking an old warehouse or factory building and converting it into an indoor biking facility. He called it “a crazy dream.”

That dream became a reality in 2004 with the opening of Ray’s MTB Indoor Bike Park in Cleveland. The 140,000-square-foot facility proved to be such a hit among biking enthusiasts that a second, 100,000-square-foot location opened in Milwaukee in 2010.

“There are a lot of people who ride bikes in these cities, and they pretty much have to shut it down during the winter,â€ says Keith Miller, general manager of the Cleveland Ray’s. “So we’re offering people an awesome experience to come into the park and ride their bikes when they normally couldn’t do it.”

The trails in Ray’s are made out of wood with plenty of natural features, such as logs and rocks scattered throughout to give it an outdoors feel. Traffic on each trail goes in the same direction in order to avoid collisions, and they are all marked and colored-coded with signs telling riders where to go. Still, the facility is so large that Miller says people occasionally get lost.

The routes are designed for varying levels of biking experience, much like the trails at a snow ski resort. Some have ramps, jumps and rails for expert bikers, while others are basically flat with gradual curves. There is even an area that is the equivalent of snow skiing’s bunny slope, where novice bike riders can learn the basics. And while children are welcome, Miller says the park actually is geared more toward adults in the 25-to-45 age range.

“We have a little bit of everything,â€ Miller says. “The level of rider varies from beginners to people who make their living riding bikes. We have enough things to keep people busy for hours. Or days.”

Attracting cyclists from hours away

Miller says riders are encouraged to bring their own bikes, though rentals are available. Pads and helmets are free to use. Prices range from $21 for a weekday pass to $350 for an annual membership. The facility is open from October through April, when the weather becomes warm enough for cyclists to venture outside once again.

“Cleveland is really getting into the cycling scene. It’s become one of the top cycling cities in the country,â€ Miller says. “We would like to think that was partly due to us. We bring people from a five-hour radius into Cleveland every day during the winter. We’re bringing income to restaurants and bars and hotels that normally wouldn’t get that business in the winter. This has really turned into a destination for people who want to ride their bikes in the winter. We’ll never claim to be able to bring the outside indoors. But we’re trying our best to make it really, really close.”

“We’ll never claim to be able to bring the outside indoors. But we’re trying our best to make it really, really close.”