Skip to content
Home > OH > Love Where You Live > What Dayton and Toledo Actually Do Have in Common: Both Are ‘Certified Welcoming’ Places for Immigrants

What Dayton and Toledo Actually Do Have in Common: Both Are ‘Certified Welcoming’ Places for Immigrants

"There’s such a spirit of wanting to rally and support people.” 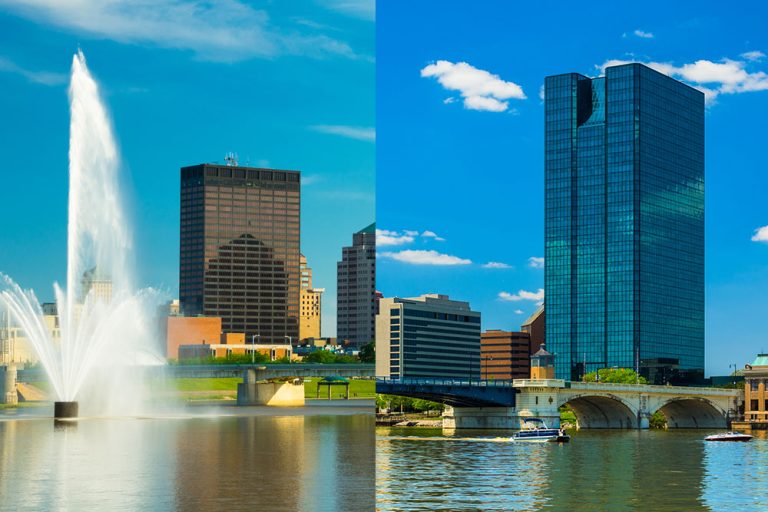 Despite some recent confusion, Dayton and Toledo are not actually the same city in Ohio. Located about 150 miles apart, Toledo and Dayton are in different regions of the Buckeye state, but they have one important link: They are both officially designated as “welcomingâ€ places for immigrants.

Welcoming America – a nonprofit organization that stringently assesses a community’s efforts to provide inclusive places for everyone to live – named Dayton as its first official “Certified Welcomingâ€ city in September 2017 and gave Toledo-Lucas County their title in April 2019, making them the fourth community in the country to get the distinction and the second in Ohio.

The “Certified Welcomingâ€ title is not an easy one to get, and the evaluation process consists of meeting policy and program benchmarks in seven different categories, which include government leadership, equitable access, civic engagement, connected communities, education, economic development and safe communities. The process of becoming “Certified Welcomingâ€ can take anywhere from six months to one year, according to Welcoming America’s website, but communities are eager to achieve that certification.

“I think it’s important to be able to say that we are being welcoming to everybody and not just a specific population, but that we want to be a community that recognizes contributions of immigrants in the midst of all the negative rhetoric,â€ says Monica Harris, the Welcome Dayton Coordinator, which is a community initiative to help immigrants, and part of the Human Relations Council for the City of Dayton.

Although Dayton is a small Midwestern city with a 4.8% foreign-born population, the city has implemented policies and initiatives that make it more inclusive to immigrants, like providing free interpreters in every city building and having a strong relationship between the immigrant population and the police department, according to Harris.

Meanwhile in Lucas County, the large influx of immigrants over the last 10 years have curbed a population loss and are a huge part of the local Toledo economy, contributing more than $31 million in state and local taxes and spending about $242 million in the region.

“It is unique that in our region, both government leaders and business leaders across the spectrum support welcoming immigrants and refugees in our community,” says a spokesperson for the Toledo Mayor’s Office. “Our community recognizes not only is it the right thing to do, but also because our local immigrant community is offsetting local population decline and provides substantial impact to our economy, is also the smart thing to do.”

Lucas County earned marks with Welcoming America for having a network of organizations that all specialize in supporting immigrants and helping them settle into town, such as US Together, a group that provides services through education and advocacy.

Corine Dehabey, the Resettlement Coordinator for US Together, says that the “Certified Welcomingâ€ title solidifies what she already knew about the Toledo area – that it’s a place where immigrants can be themselves.

“Immigrants don’t have to change who they are [in Toledo]. They can feel safe and comfortable. They can contribute to our community free of barriers. They can live like any other person lives or works. They can live a normal life,â€ Dehabey says.

The “Certified Welcomingâ€ title not only helps to attract more immigrants to communities like Dayton and Toledo, but the program also provides a report at the end of the process that helps city and county officials with guidelines on areas to grow, such as economic development for immigrants or civic engagement.

Above all, the title reflects that a city is inclusive and welcoming for everyone, something that’s become increasingly important and meaningful in light of the recent increase in hate crimes and violence across the country.

For a place like Dayton, reeling in the aftermath of last weekend’s mass shooting that took nine lives, continuing to be a welcoming, positive place is a crucial part of the healing process.

“I think there’s always been a culture of warmth in general,â€ says Harris of Dayton. “People have come together after the tornadoes and now the shootings that have happened in our city to rally around their neighbors. People have reached out to [Welcome Dayton] specifically and said, ‘Hey we are sure that there are immigrant families who are dealing with the aftermath of these events, and is there any way we can specifically help them?’ There’s such a spirit of wanting to rally and support people.”