How a small town in Ohio transformed itself into an oasis for bicyclists — and what other cities can learn from their success. 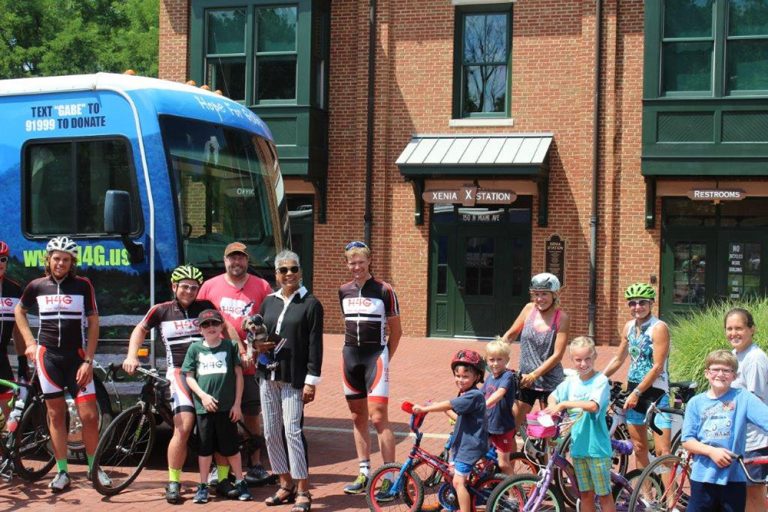 A little over a century after the first train pulled away from Xenia Station, miles of tracks were unceremoniously ripped out in the late 1970s from the former Little Miami Railroad in Xenia, Ohio. Xenia certainly wasn’t alone in their desertion of the rail system. By 1984, an estimated 4,000 to 8,000 miles were lost each year, signifying the end of a transportation era. A big question then followed:

What do we do with it now?

Bike advocacy groups around the country had an answer: repurposing the abandoned railroads into bike trails. And in 1986, the “rails to trailsâ€ movement came to Xenia in the form of a fully-funded grant from the Federal Highway Administration, thanks to the initiative of motivated cyclists and city planners. There would be a resurrection of the Little Miami Railroad – and it would live its new life as a bike trail.

In 1991, the Little Miami Scenic Trail officially opened from Xenia to Yellow Springs, Ohio, for cyclists, walkers, runners and even horseback riders who wanted to take advantage of the paved trails that were far from the danger of the roadways. It is the largest paved trail in Ohio and remains one of the largest in the country, where thousands eagerly hit the trail each year, snaking around the Little Miami River with its abundance of scenic Sycamore trees, cliffs and natural gorges to enjoy as you pedal past.

The Bicycle Capital of the Midwest

After the initial opening of the Little Miami Scenic Trail, surrounding trails began to be built and expanded and gaps are continuing to be filled to provide residents and visitors with optimal exercise opportunities and connections to other cities in Ohio. Xenia’s identity quickly changed from a former railroad town to one of the most sought-after destinations for cyclists, earning the nickname “The Bicycle Capital of the Midwest.”

“We became the hub of four major regional paths right through town. Circumstance and leadership is how we got to have what we have today,â€ says Brian Forschner, Xenia city planner.

Although the city of Xenia’s share of the major bike paths is only about 14 miles, its importance as a cycling city is that it is the starting point of trails that extend for 519 miles just within Ohio. These trails connect cyclists in Xenia to nearby Dayton as well as Columbus, Cleveland and Cincinnati. Xenia is also at the intersection of US Bike Route 50, which currently runs from Washington D.C. to Illinois for the more adventurous cyclists out there.

A replica of the old Xenia train station marks the spot of the trail heads, which gives riders a space to grab a drink of water, chat with other riders, look at the trail maps and have a place to rest at the end of a long ride. Xenia Station also holds a lot of promise for the future with hopeful plans for lodging, dining and other gathering spaces, according to Forschner.

Biking for the Health and Vitality of the City

Because of its position as a trail hub, Xenia has been routinely named as a center for fitness and health, including being recognized as one of America’s best walking towns, best hiking towns and has even received accolades from the EPA for its efforts to enhance the city through transportation improvements that help reduce traffic congestion and boost mobility and safety.

While there are the obvious benefits of exercise and repurposing unused railways, Xenia has experienced another side effect of being a major trail hub: tourism dollars. This is largely thanks to the nationwide cycling craze as well as a recently completed Downtown Safety Project, which connected previously dead-ended sections of the Little Miami Scenic Trail with protected bike paths in the heart of downtown.

“We’ve seen an uptick of interest in our downtown, including from a microbrewery in our downtown who said that ever since we put the bike path in, they have more business,â€ says Forschner. “Our main street shouldn’t be designed to just funnel cars through the city as fast as possible. We want people to slow down a little bit and visit the businesses that are trying to thrive. They want people to stop and visit them.”

A Sense of Community

Above all, the bike paths fosters a sense of community in the city and serve as a desirable amenity for residents and visitors who are out to discover a new place and improve their community’s quality of life. Millennials who are interested in exercise and Baby Boomers who have more time on their hands in retirement are seeking out alternative forms of transportation, better walkability and more access to public amenities and Xenia has been uniquely situated to provide these opportunities for its residents and visitors.

“[Having a bike path] becomes more of a social experience and creates a desirable public space as compared to a strip mall with a big parking lot,â€ says Forschner. “The ability to walk and bike safely is an essential part of cities that I think we forgot about for a while, but we are now rediscovering.”