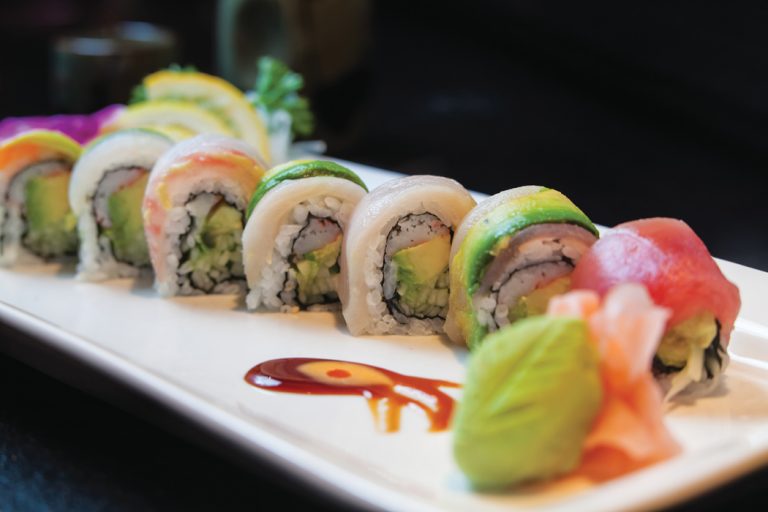 Diversity keeps the Broken Arrow food scene spicy and flavorful, with the city’s dining options ranging from all-day breakfast to mouthwatering barbecue to international cuisine.  If you have a craving, chances are you can find a local restaurant to quell it.

Sample a sushi roll or try the sweet and spicy shrimp stir-fry at In the Raw in Broken Arrow’s trendy Rose District. Serving lunch and dinner, the restaurant offers menu items like lobster spring rolls, teriyaki rice bowls and blackened salmon, as well as dessert options such as vanilla brulee and banana tempura. Just popping in for a drink? Grab a seat at the restaurant’s swanky bar and sip on a beer, glass of wine or specialty cocktail.

Start the day off right at Egg It On Cafe, where a hearty breakfast is always on the menu. The restaurant serves a mix of classic favorites – biscuits and gravy, French toast, made-from-scratch pancakes and omelets – and creative dishes such as moon cakes, which include a smashed MoonPie inside two pancakes. In addition to breakfast and brunch, lunch is also served all day, with menu items like sandwiches, burgers and salads available.

Meat lovers can’t get enough of Smokies Hickory House BBQ, a lunch and dinner spot featuring pork, brisket, ribs, chicken, sausage, ham and bologna, as well as various Oklahoma-made sauces. No meal is complete without a side or two, including barbecue beans, coleslaw, potato salad, fried okra, French fries, onion rings and atomic slaw. Still have room for something sweet? Enjoy a slice of cake or pie from the eatery’s dessert case, or try a truffle.

Andolini’s Pizzeria, located inside The District @ 222 in the Rose District, is known for its craft pizzas with such toppings as Italian sausage, grilled chicken, Canadian bacon, roasted red peppers and fresh basil. The restaurant also serves Italian entrees, among them spaghetti marinara and fettuccine Alfredo with chicken. The restaurant’s broad beer selection includes 30 beers on tap and 75 in the bottle. For dessert, Andolini’s offers homemade Italian butter cake, canella knots and Oreo cheesecake brownies.