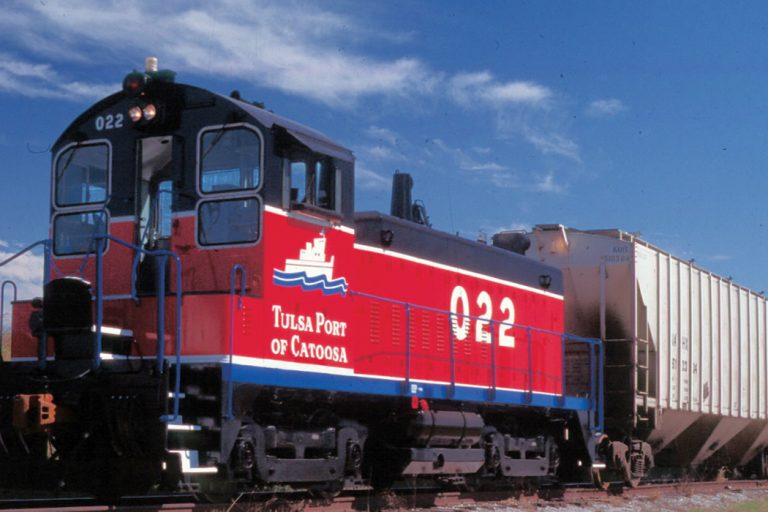 Ahoy! The Tulsa Port of Catoosa brings the oceans to Oklahoma.

That is an unofficial slogan used at the busy port, and Catoosa today is one of many attractive transportation options available to distribution, warehousing and logistics companies doing business in Claremore-Rogers County.

This part of northeast Oklahoma features a number of well-traveled roadways, including Interstate 44 that crosses Claremore to the southeast, and State Highway 66 (historic Route 66) that makes up one of the main thoroughfares in the community. Also intersecting the city are State Highway 20 and State Highway 88, while U.S. Route 169 lines the western portion of Rogers County.

Two railroads – BNSF and Union Pacific – also serve the industrial shipping sector throughout the region.laremore Regional Airport has recently received more than $6 million in federal grants and continues to stand out as premier facility in northeast Oklahoma. The general aviation airport, with a 1-mile runway, has seen tremendous growth over the past five years.Today 80 corporate jets, small aircraft and helicopters are housed on site.

The Tulsa Port of Catoosa in Rogers County accommodates 60 companies in a 2,000-acre industrial park situated along the Arkansas River. The port has an economic impact of about $300 million on Oklahoma, and nearly 4,000 people are employed at the complex.

“We handle about 1,400 barges a year, and barges in today’s economy offer the lowest-cost mode of surface transportation in the United States,” says Bob Portiss, director of the Tulsa Port of Catoosa.

“We deal with Belgium, Germany, France, Russia, Spain, Japan, China and more, and we are always looking to attract more industry and trade partners,” Portiss says. “If a company needs to move loads from 900 to 1,500 tons, shipping by port is the best way to go for many reasons.”

While transportation is a key player in the economic success of Claremore-Rogers County, so are several other sectors. Jeri Koehler, executive director of the Claremore Industrial & Economic Development Authority, says quality of life plays a big factor.

“We are centrally located to major regional markets, home to award-winning schools, and have attractive commercial and industrial sites,” she says. “For industry, 200 acres of land are available at Claremore Industrial Park, and companies in our community like Baker Hughes, National Oilwell Varco, Caseco and Pelco Structural have recently expanded. A lot is happening these days.”

Officials in Claremore and Rogers County often work together to promote northeast Oklahoma as an ideal area in which to do business. As a result, manufacturing is a major contributor to the local economy. The towns of Chelsea, Inola and Oologah all have incubator buildings whose tenants are primarily manufacturing startup companies.

“A fourth incubator building is under construction, and we also are getting inquiries on land available at the Jim Summerlin Industrial Park in Inola,” says Debi Ward, executive director of the Rogers County Industrial Development Authority. “Our region is great for distributors because all of our towns are within 15 to 20 minutes of the Tulsa Port of Catoosa, and all towns have access to rail and good highways.”

Ward says Oologah also made recent headlines by opening a major grocery store – Apple Market – along the area’s busy U.S. 169 corridor, while in Chelsea, plans are to renovate the historic downtown Main Street district that connects with Route 66.

“Route 66 attracts travelers from all over the world, especially during the spring and summer months,” Ward says. “Tourism in Chelsea is about to become another of our economic strengths. It’s all part of promoting our region for the good of everyone throughout our community.”

“We are centrally located to major regional markets, home to award-winning schools and have attractive commercial and industrial sites.”