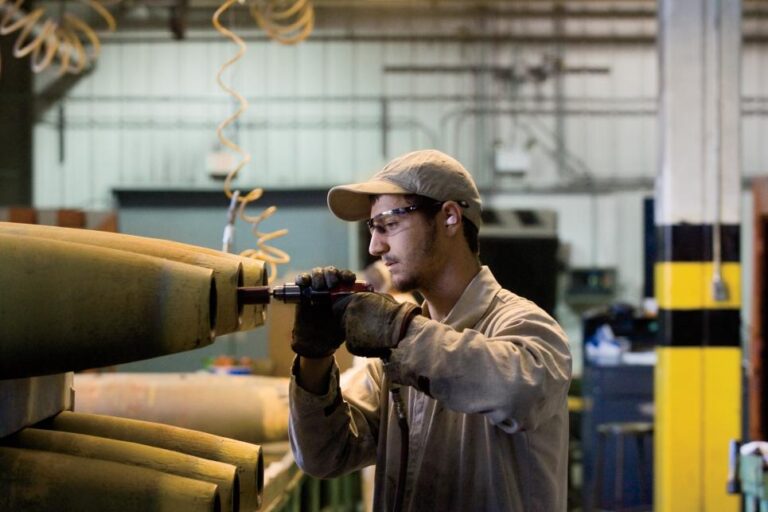 McAlester Army Ammunition Plant is the largest employer in southeastern Oklahoma, with 1,500 civilian employees and only one soldier at the installation – the commander, Col. Joseph Dalessio.

“We have a great relationship with this city and the surrounding communities. I’ve served at more than a dozen military installations across the United States and abroad, and this is a special place,” Dalessio says. “The people in McAlester are friendly, supportive and patriotic. It’s great for my family and me to be members of the community.”

More than 50 local businesses are members of the McAlester Defense Support Association, which backs the military defense industry that thrives at MCAAP, says H. Gene Walker, association vice chairman and president of Arvest Bank in McAlester.

“The association recognizes the impact that employees, expenditures, contracts and purchases have on McAlester, Pittsburg County and southeastern Oklahoma,” says Walker. “The Oklahoma Department of Commerce did a recent analysis on the five military installations in Oklahoma and showed that McAlester Army Ammunition Plant provides an annual economic impact of $500 million for southeastern Oklahoma.”

MCAAP, a unit of the U.S. Department of Defense, was established in 1943, and today is basically a city within a city, encompassing 45,000 fenced-in acres including 2,800 permanent buildings and 410 miles of roads. Also at the installation is the U.S. Army Defense Ammunition Center, which is a tenant of the base under a separate command, but still part of the U.S. Department of Defense.

MCAAP manufactures ammunition and explosives used by every branch of the armed services, and the base is considered the premier bomb producer and warhead loading facility in the nation. More than one-third of all munitions used by the U.S. military are manufactured at the McAlester site.

“Regarding the economic aspect, the plant has contracts with multiple defense contractors that include Boeing, General Dynamics, Textron Systems, Raytheon and Choctaw Defense,” Walker says. “Nearly 9 million square feet of storage capacity is on-site, along with a rail spur and 221 miles of track for loading and shipping munitions to all parts of the country.”

Walker adds that one of the biggest events the McAlester Defense Support Association undertakes to show community support is scheduling periodic trips called McAlester Stampedes to Washington, D.C., with the most recent one occurring in May 2014.

“McAlester Stampedes are delegations of 25 or so community leaders who fly to Washington and host congressional receptions with senators and representatives to show support for the local defense industry,” he says. “Brad Carson from Oklahoma is the new undersecretary of the Army in Washington, so we keep in close contact with him, too.”