McAlester, OK Has Fun in Store For Families 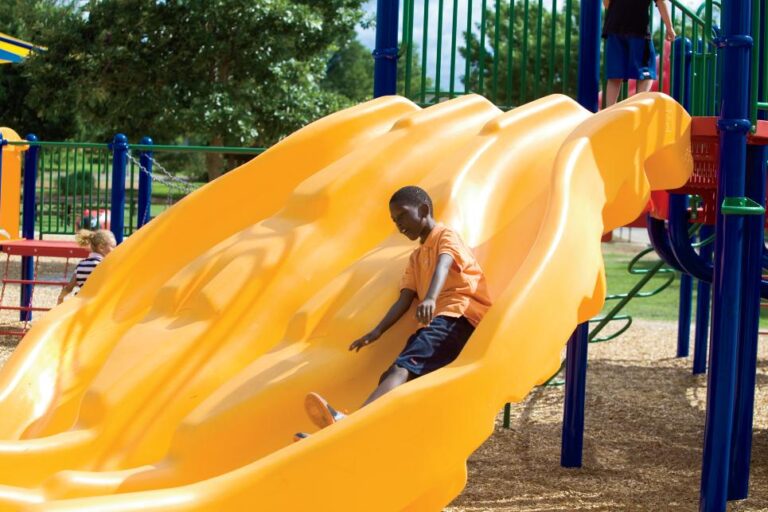 McAlester moms and dads rarely want for activities to keep their kids busy and active. The area has plenty of places for play year round, including 14 parks, several public and privately owned recreation centers, a thriving Little League organization, proximity to lakes and lots of fun family events.

McAlester’s system of 14 public parks and recreation centers includes the 10.2-acre Chadick Park in the heart of the city, which recently received new playground equipment. The park also draws families for free movies in the park when the weather allows. The gatherings have been a big hit since the city purchased an inflatable screen and projection equipment and began hosting the events in 2013.

“We throw out our blankets, pillows and enjoy snacks and a movie under the stars. It’s really a lot of fun,” says Valerie Jackson, who blogs about her family’s life here on her website, www.mcalestermom.com. “There are so many families there, and it’s a really great atmosphere. Plus, it’s free, so it doesn’t break the bank to take the kids to a movie.”

Meanwhile, the local Boys & Girls Club also makes its home at Chadick Park and has been in operation since 1960. The club welcomes students from first grade through high school and features a popular after-school program that includes soccer, football, basketball, baseball and softball. Students get help with their school work, too.

For families who love the water, the McAlester area offers three public pools and five wading pools, plus proximity to lake activities at McAlester Lake and Lake Eufaula.

“Nothing beats the summer heat like taking the kids over to the splash pad over at Chadick Park,” Jackson says. “The kids love playing in the water, and it can be a quick trip to cool off if you’re short on time. We follow it up with hitting up one of the many shaved ice stands around town.”

Residents also enjoy the picnic tables, camping areas and boat ramp access at McAlester Lake, located just 5 miles from town. A bit further away, but still within easy reach, Lake Eufaula offers 600 miles of shoreline. Kayak and canoe rentals make it easy to enjoy a relaxing outing on the water. Jackson says her family often makes the short drive to Jellystone Park at the lake.

“It’s fun for the kids because they can meet Yogi Bear, and they sometimes have themed weekends,” Jackson says. “We also enjoy taking the kids up to Robber’s Cave (State Park) to go hiking, use the paddle boats or just have a picnic. It’s beautiful up there and makes for great family photo ops.”

It might be young, but the Pittsburgh County Little League program is going strong.

“This is only our fifth year, and we’ve got around 500 kids from ages 3 to 14 participating,â€ says Joshua Hass, Treasurer of the Pittsburg County Little League. “We’re the largest organized baseball league in southeastern Oklahoma.”

Teams in the countywide program practice, play – and often win – from March through June, and again from September through November. In the past five years, various Pittsburg County Little League teams have triumphed in six state championships.

“Every year we’ve been in existence, we’ve won a state championship in one division or another,” Hass says. “Baseball is a big deal here, and we’ve made an impression on the community.”

McAlester also has a couple of elaborate venues designed specifically for fun, making them entertainment destinations for special outings and favorite spots for birthday parties.