See what efforts community leaders in Muskogee have taken to make the city green and protect the environment. 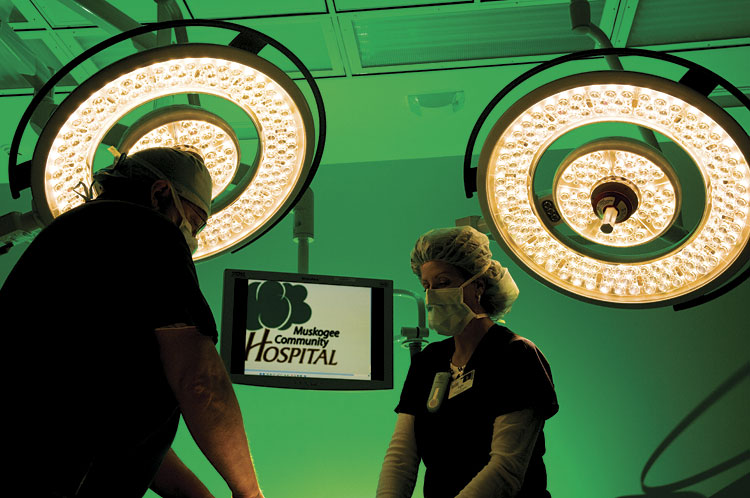 Northeastern Oklahoma is known as Green Country, and here in the foothills of the state, Muskogee is a green city any way you slice it.

The local government is aggressively promoting environmental responsibility on all fronts, and organizations from health-care providers to educational systems are supporting the efforts through targeted awareness programs and earth-friendly live/work practices.

The community places a strong emphasis on instilling in young people the importance of a sustainable lifestyle, beginning with educational recycling programs in elementary school. The Go Green Initiative is a systemwide awareness and action program implemented in fall 2009 that organizers hope will both open students’ and teachers’ eyes to the need for change environmentally, as well as develop lifelong recycling habits. Plans include establishing an energy patrol, which will recruit students to inspect school buildings for opportunities to be more efficient, and the recycling of materials such as printer cartridges.

So far, the reception of and support for the program has been tremendous, says Wayne Johnson, director of maintenance and facilities for Muskogee Public Schools and chair of the Go Green Initiative committee.

“We’ve tried to do this before, and it was more of an uphill battle, but now I think society is changing. I think that’s one of the things that is great right now, because to have a Go Green Initiative, you can’t just have one or two people. It has to be everybody involved, or at least a large majority involved,” Johnson says. “The awareness of our young people has really made a big difference. It used to be mostly teachers who had that awareness, but now it is a student-involved – and almost to the point of a student-led – initiative.”

Northeastern State University is also on the crest of the sustainability movement. The school has established Green Notes, a program that offers students tips for green living and brings environmental awareness seminars to campus.

Another sector on the leading edge of Muskogee’s green transformation is health care. Muskogee Community Hospital, which opened in early 2009, is one of the nation’s most environmentally friendly health-care facilities. The hospital is both LEED-certified and the first health-care facility to receive the Environmental Protection Agency’s Energy Star Award. According to the EPA, the hospital exceeds the energy efficiency standards for the year 2030.

Avant-garde green features include LED lights with 40,000-hour lives in operating rooms, cork flooring in patient waiting areas, low volatile organic compound paints and glues, and ground source geothermal heating and cooling. Roughly 77 percent of all trash, or more than 1 million pounds of would-be waste, was recycled during the construction of the building.

The facility is ahead of its time now, but when plans began a few years ago, the concept of an eco-friendly hospital was unheard of, says Mark Roberts, hospital president.

“When I first started talking about the fact that we were building a green hospital, people literally would say, ‘What color green?’” Roberts says. “But I don’t want to make it look like we’re geniuses, because it seems at some point, it’s just the right thing to do. And I don’t know who could argue the other side.”

Find out more on industries in Muskogee.