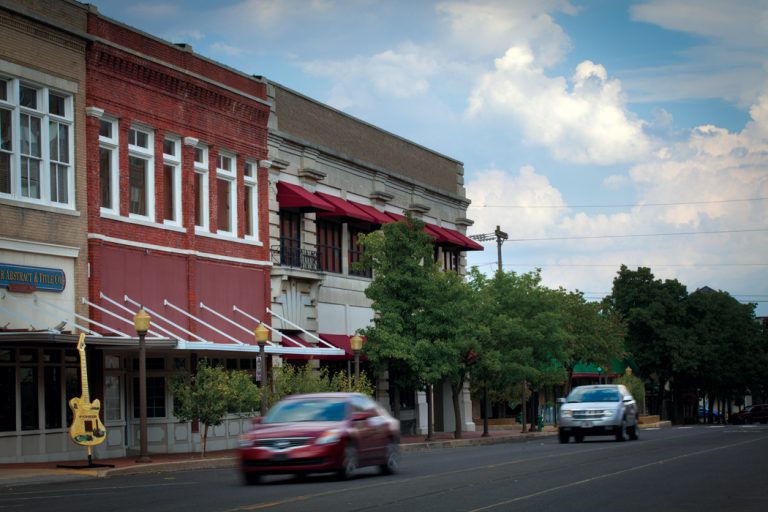 The retail industry in Muskogee has made plenty of news lately. In early 2016, a 115,000-square-foot Three Rivers Plaza Shopping Center opened on the Shawnee Bypass with retailers such as Dick’s Sporting Goods, TJ Maxx and Ulta Beauty.Also new to Muskogee is the Aldi supermarket chain, which opened a store on West Shawnee Street. The Arrowhead Mall has 60 stores and nearly 500 employees, while the Muskogee Katy District features an interesting mix of coffee, clothing, resale, bakery and antique shops along South Main Street.

With access to the Gulf of Mexico and the Mississippi River, the Port of Muskogee is a regional hub for transporting goods by truck and railroad as well as barges along the Arkansas River. Commodities handled include iron and steel, industrial minerals, asphalt, petroleum coke, fertilizer, grain and construction materials. The port’s industrial park houses more than a dozen industries with a combined 2,500 employees and a payroll exceeding $125 million annually.

For more than 100 years, the mainstay Club Lunch café has served diners in downtown Muskogee, and the popular meat-and-three on North 3rd Street completed a major renovation in March 2016. The restaurant was closed for three months to refurbish and expand slightly. Today the staff is again serving menu favorites like tortilla soup, Mexican casserole, Salisbury steak and Southern fried chicken, plus new additions to the menu.

Royal Sign has produced quality signs and graphic designs in Muskogee for nearly 40 years using a combination of old-school artisanship with the newest technologies to deliver to a client list that includes Fortune 500 companies. Suddenlink, the seventh-largest cable operator in the United States, operates a call center in Muskogee with 400 employees who assist customers with their TV, internet, phone and security needs. Florida-based Gerdau Ameristeel is the leading producer of long steel in the Americas, and much of its low-carbon manufacturing occurs at the company’s Muskogee plant on E. Shawnee Road.

A new $1.6 million Muskogee First Responder Training Center has opened to give firefighters, police, sheriff deputies and first responders throughout eastern Oklahoma a place to train. The multilevel building allows different agencies to train together in preparation for natural disasters or acts of terrorism.