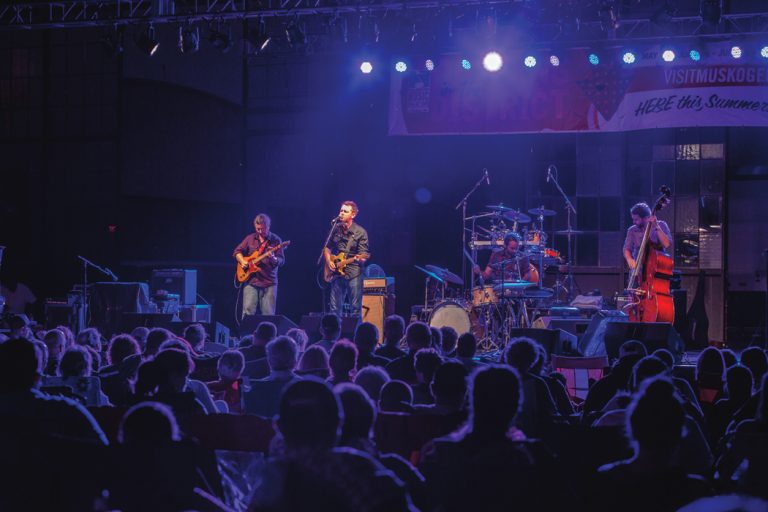 Treasure McKenzie, president and CEO of the Greater Muskogee Area Chamber of Commerce, says the city will always be proud of that branding slogan, but it's time to also add a modern edge to the chamber's marketing efforts for the community.

“Merle's song put us on the map, but we wanted to update what a young person would want on a T-shirt or hoodie, or what a Muskogee native would want on a bumper sticker,” McKenzie says. “We contracted with an agency called Cubic Creative that developed a REAL.OKIE. slogan.”

McKenzie says during the search for a new slogan, many Muskogee citizens and leaders were interviewed about what defines an Okie. Several pointed out traits such as strength, genuineness, authenticity and having good character.

“We want this campaign to become, for example, as big as Eskimo Joe's in Stillwater, a restaurant famous for their T-shirts that are literally seen around the world,” she says. “We think our T-shirts and hoodies – all of which say REAL.OKIE. with Muskogee, Oklahoma written underneath – has that kind of potential, too.”

Beat Out Tulsa and OKC

As a result of the REAL.OKIE. initiative, the Greater Muskogee chamber won the 2015 Oklahoma Travel Industry Association Redbud Award for best overall marketing campaign in the state. The award was presented to Muskogee in May 2015 by Lt. Gov. Todd Lamb.

“We beat out communities like Tulsa and Oklahoma City, which both have much bigger marketing budgets than us,” McKenzie says. “Our new campaign will hopefully attract more tourism, which is the purest form of economic development.”

Muskogee already has a decent tourism industry, attracting about 1.5 million annual visitors who have a $100 million economic impact on the city. McKenzie says building the REAL.OKIE. brand is a lengthy process that could take approximately 10 years to fully develop.

“The brand is in its infancy, but we're already proud of it,” she says. “Being a real Okie. As Merle put it, it’s all about 'livin' right and bein' free.'”