Muskogee, OK has some great fishing and even hosted the Bassmaster Championship on ESPN in 2010. 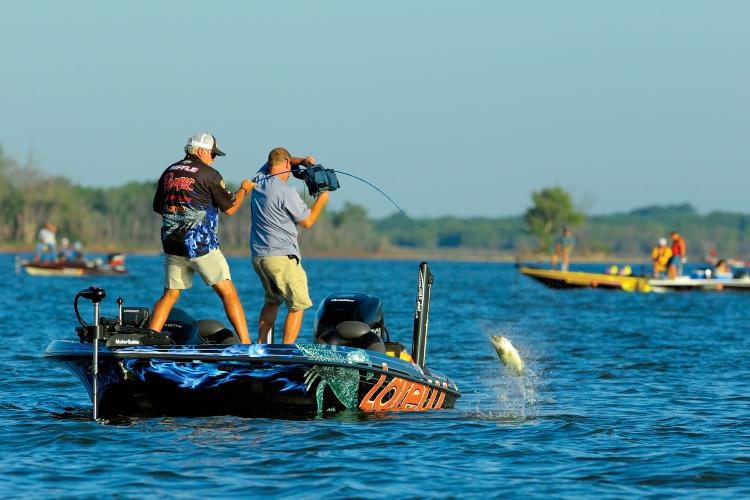 Professional angler Tommy Biffle is accustomed to tournament pressure, but never was that pressure greater than in the June 2010 ESPN Bassmaster Elite Series event held on Fort Gibson Lake near Biffle’s hometown of Muskogee.

“I had to win that tournament,” Biffle joked, “because all my family and friends were there – my wife, my daughter, my cousins. On the final day there were about 70 boats following me around.”

Biffle’s home-lake advantage came through, and he came away with top honors in the “Sooner Run.”

Biffle grew up fishing Fort Gibson and other Muskogee-area waters, and says that gave him an edge over nearly 100 other tournament competitors: “Knowing the lake is important for finding fish, but you still have to offer them the right bait at the right time.”

Biffle wasn’t the tournament’s only winner; the Muskogee area netted a prize when it landed one of the nine Elite Series events held across the country.

“It was a wonderful event, the tournament and related festivities,” says Sue Harris, president of the Greater Muskogee Area Chamber of Commerce & Tourism. “In conjunction with the final weigh-in we held a music festival that drew about 5,000 people.”

Approximately 3,600 spectators attended the weigh-ins each day of the four-day tournament. Many were from out of town and required lodging in addition to patronizing restaurants and other businesses.

“We saw license plates from four different states, as well as from counties all across Oklahoma,” Harris says. “Most of our area hotel rooms were filled.”

In addition to the economic impact, ESPN’s tournament coverage attracted a quarter-million viewers nationwide – positive exposure for the area and its outdoor opportunities.

Fishing tournaments have exploded in popularity since Ray Scott founded the Bass Anglers Sportsman’s Society (BASS) in 1968. Being chosen to host an event is a plum for any community, and ESPN tournament spokesman Doug Grassian says three factors are involved in the selection process:

First, the location has to have a thriving fishery – in other words, waters that produce plenty of big bass.

Second, tournament officials prefer to schedule events in communities and regions that have a high concentration of fishing fans and BASS members.

Third, the site must have the infrastructure in place to host an event of that magnitude (a weigh-in area that can accommodate fans and media, room for an outdoor expo and other festivities, plus lodging for anglers, spectators and staff.)

“Oklahoma is absolutely a place that fits the bill,” Grassian says.

Next year’s tournament schedule is booked and plans are being made for the 2012 circuit. Will Muskogee bid on another?

“We will certainly consider it,” Harris says. “We had a wonderful, positive experience.”

Tommy Biffle is rooting for his hometown.

“It’s a great all-around great event,” he says. “It’s good for the economy and brings a lot of positive exposure to the area. Plus, I’ll take that home-lake advantage anytime I can get it.”

Learn more about why Muskogee is a water city.