Muskogee's arts scene is growing by leaps and bounds. 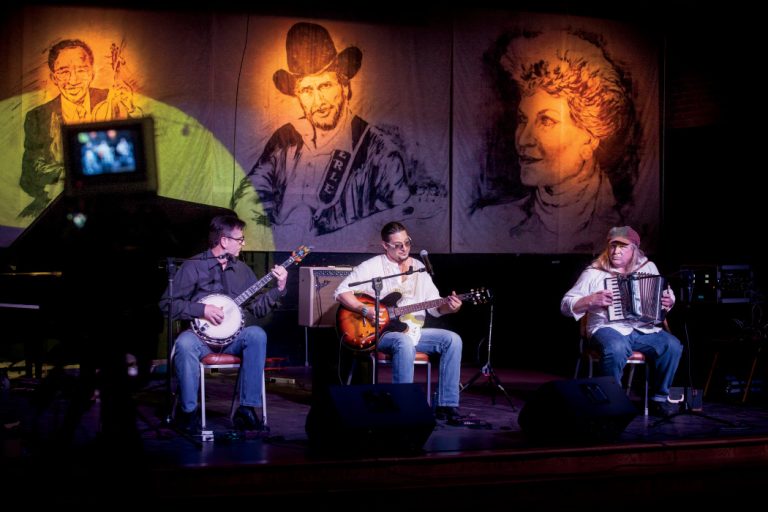 Muskogee’s Depot District is expanding and bringing new amenities to this cultural and recreational center in the heart of downtown. The district encompasses the area from Main Street to Fourth Street and Elgin Street to Columbus Street.

The Three Rivers Museum, housed in the former Midland Valley Railroad Depot, is one of the area’s anchors. The museum tells the story of the Three Rivers region of Oklahoma through historical displays and exhibits.

The gateway to the expanded district is the new, state-of-the-art Muskogee Little Theatre, which features a 250-seat auditorium, a black box theater and an educational center. The district’s epicenter will be Depot Green, a multi-use park and recreational area that connects the Depot District to the city’s greenway trail system.

The Muskogee Area Arts Council initiated Phase II of the Muskogee Rhythms Guitar Project in 2016. The public art program, which began in 2007, commissions local artists to paint fiberglass guitars that are displayed in outdoor spaces for the public to enjoy. Each 8-foot painted guitar is sponsored by an area business or organization.

The first phase of the project resulted in 31 guitars produced and displayed in front of businesses, in parks and even in the front yards of sponsors. Phase II will begin with eight or nine guitars designed in the shape of acoustic guitars rather than the electric guitars of Phase I.

Three years ago Muskogee artist Hope Farmer opened The Creative Soul studio to share her talent and her love of art with the community. The Creative Soul regularly hosts group classes – church groups, birthday and bachelorette parties, couples and girls’ night out events.

Co-owner Louise Bishop hosts camps for kids and offers step-by-step instructions that make painting fun and easy for both beginners and advanced artists.

The USS Batfish, a World War II submarine responsible for sinking 14 enemy ships, is on display in Muskogee’s War Memorial Park. The submarine is open to tours, which include the torpedo room and crew cabins. War Memorial Park offers events year-round that educate visitors about the famed ship and its service. The USS Batfish Living History Day and Winter Cruise held each February, gives visitors an opportunity to learn firsthand about World War II submarine life. Groups of 10 or more can book overnight stays aboard the submarine.