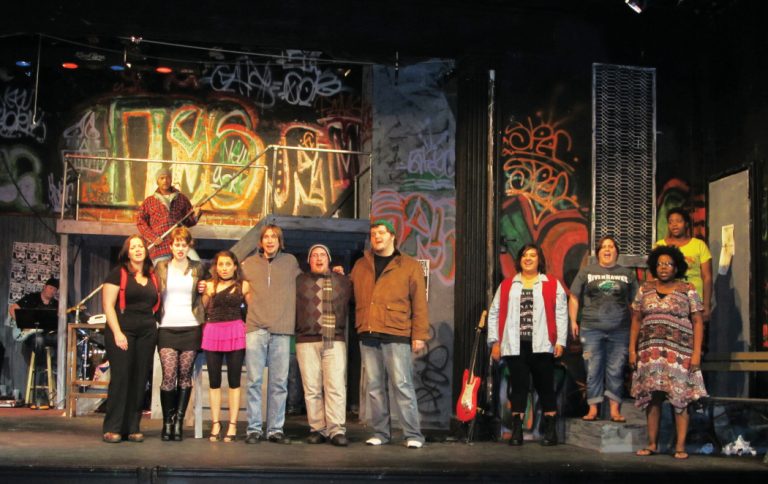 If you long to see Peter Pan fly away to Neverland, hear Sally Bowles belt her heart out in Cabaret, or see Patsy Cline come to life on stage, there’s no need to go to New York, or even Tulsa. Just head down to the new Depot District and see Muskogee’s own award-winning theatrical productions.

The Muskogee Little Theatre has been wowing theater lovers for 44 years, turning first a garage and then a former school “cafetorium” into a place where drama, musicals and arts education have made headlines. But now, MLT is about to realize a longstanding dream as it opens a state-of-the art facility that will reward years of work and planning.

“If you could see what we do, and the place we do our shows in, you’d be amazed,” says David Eckerson, MLT board president. “We put on amazing productions in a very tight space. The cafetorium has served its purpose, but expanding and growing has always been in our minds.”

Eckerson’s personal experience is a snapshot of how MLT has become an integral part of the community. Until his eldest daughter was 6, he admits “I don’t think I had been in a theater to see a play in my life.” But when she came home from her first day at MLT theater camp and announced “Daddy, this was the best day of my life,” he was hooked. Fast forward a few years, and Eckerson, both daughters and his wife are all deeply involved in the organization.

People like Eckerson are a big part of what has made MLT such a success.

“I’m sure every community can say this, but we have incredibly talented people here in Muskogee,” says MLT executive director Coni Wetz. “I get directors from all over the state who want to direct because our talent pool is so strong. For a little 144-seat theater that started with a bunch of friends putting on a play in the garage, we have gone to being voted theater of the year for the state of Oklahoma.”

MLT can point to a long list of achievements. Unafraid to tackle big dramas and splashy musicals alike, the company’s five annual productions have included everything from The Miracle Worker, in which the actress playing Helen Keller was actually blind, to It’s a Wonderful Life to Cabaret to Spamalot — all in a former school cafeteria.

Thanks to a $5.5 million grant from the City of Muskogee Foundation, and an astonishing 6-month-long campaign that raised another $1 million in matching funds, Muskogee Little Theatre welcomed patrons in fall 2016 to a new facility, kicking off with a production of Mary Poppins. She flew in, umbrella in hand, from a fly tower above the stage – an entrance that wouldn’t be possible without the new facility.

The new theater, Wetz says, includes 270 seats in its main stage theater, dressing rooms with bathrooms, a real green room where actors can relax between scenes, a catering kitchen, and a beautiful new lobby that can accommodate 150-250 people and will  be available to rent for special events. The new facility also allows MLT to expand its popular summer camps.

Eckerson ticks off a few more amenities everyone can enjoy, including raked seating so there’s not a bad seat in the house; an orchestra pit; a black box theater that can be configured in different ways for smaller productions; a concession stand; a ticket booth; and public bathrooms.

“We have done so much, with so little, for so long, that at first it will be easy, but in time we will do bigger and better shows,” Eckerson predicts. “I really believe the new theater will open the eyes of people in the community who have not been involved in the arts before. The whole arts district, the theater, the Oklahoma Music Hall of Fame, Three Rivers Museum, will be a place for people in Muskogee to go and enjoy the arts. I think it will be a big benefit to the community.”