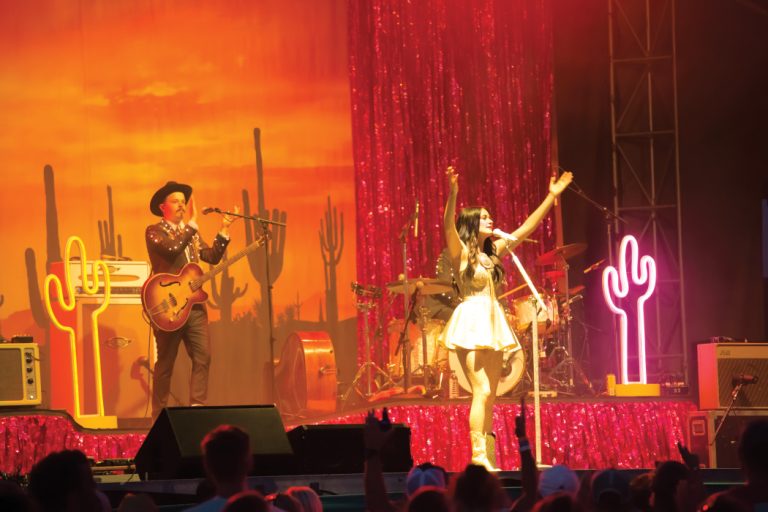 Move over, Bonnaroo, Lollapalooza and Coachella: G Fest has arrived.

For many residents and city officials, the concept of a major music festival in Muskogee was only a wish for several years. That wish came true in June 2016 when the inaugural G Fest debuted at Love-Hatbox Sports Complex off U.S. Highway 69.

The City of Muskogee Foundation provided much of the much of the funding needed to produce such a large initial event. Several local companies also helped back the festival, including James Hodge Auto Group and Love Bottling Company.

“It takes a considerable investment to present a three-day concert like this, and it will take about three years to get the cash flowing so that it becomes a self-sustaining event,” says Jim Blair, executive director of the Oklahoma Music Hall of Fame and coordinator of G Fest. “It’s well worth it to eventually make Muskogee into a true music-festival destination.”

The inaugural G Fest received positive reviews and featured nightly concerts on Thursday, Friday and Saturday that each drew up to 10,000 spectators. Old Crow Medicine Show headlined the Thursday night show, followed by The Avett Brothers headlining on Friday and Kasey Musgraves on Saturday.

The original plan for G Fest 2016 was to have Merle Haggard as the main headliner, especially since he is famous for the 1969 classic song Okie from Muskogee. However, the legendary country music star died in April 2016 from double pneumonia at the age of 79.

“People ask me what will make G Fest 2017 better than the first G Fest, and I tell them not having our headliner pass away and not having 110-degree heat index temperatures each day,” says Sue Harris, volunteer coordinator for G Fest. “Losing Merle was devastating, and the 110 degrees was unseasonably hot for June in Muskogee. It kept away a lot of walk-up traffic because TV stations understandably warned residents to stay indoors during the heat wave.”

Harris says she was proud of the inaugural volunteer effort and amazed by the response.

“About 500 volunteers became the G Team,” she says. “We recruited many people via requests on our Facebook page, plus several service organizations got involved. For example, the Shriners took care of working all the parking lots, which was a monumental effort. We also had tourists in RVs and campers travel to G Fest from more than 20 states, and many wanted to work as volunteers.”

And the question most asked during G Fest? What does the “G” mean?

“The name is from the last three letters in Muskogee, or Gee, and that was shortened to G,” Blair says. “Plus the hipsters refer to Muskogee as The G, so that’s what we went with.”

“It was a fun three days and nights that will only get bigger and better,” he says. “We want it to become a regional destination for people in Tulsa, Dallas, Wichita and Shreveport to attend, and from there we hope G Fest becomes a national attraction. I believe it will happen.”