The Port of Muskogee connects Muskogee to just about every other port in the US and provides trade to the centrally located city. 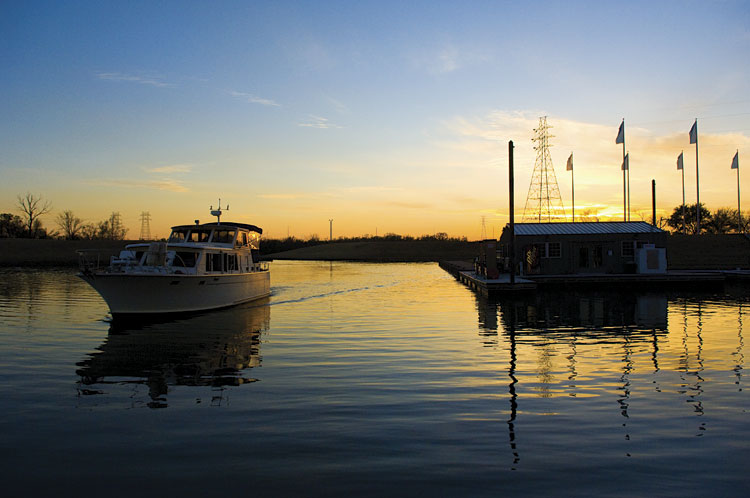 Never mind the fact that Muskogee is smack dab in the middle of the U.S. of A. Anyone who’s landlocked in this town bears that designation by choice.

The eastern Oklahoma city is connected to just about every port city in the country – and beyond – by the McClellan-Kerr Arkansas River Navigation System. The River Center at Three Forks Harbor, a new $12 million facility at the convergence of the Arkansas, Verdigris and Grand rivers, gives recreational boaters access to a vast network of waterways that spreads from New Orleans to the Great Lakes and everywhere in between.

“There’s a great adventure, or at least the opportunity of a great adventure, to take a boat from Three Forks Harbor and go to the Gulf of Mexico if you wanted to, or all over the inland waterways,” says Scott Robinson, port director. “When we travel all over the country and say ‘Port of Muskogee,’ people don’t understand. They say, ‘You’ve got a what? An airport?’ And when they understand that it’s a river port and that you have access to all of the inland waterways in the United States, and to the world, really, through the Gulf of Mexico Port of New Orleans, they’re amazed by that.”

The marina, one of the only inland ports in the country to offer a 100-ton travel lift for hoisting boats out of the water, draws water enthusiasts from all over.

When harbormaster Wayne McManus and his wife moved to Muskogee from Alabama to run Arrowhead Marina at Three Forks Harbor, they came all the way by boat. And their journey isn’t uncommon.

“A boat just pulled into the marina a few minutes ago that came down from Lake Michigan,” McManus says. “We had a boat leave here last fall that is now docked in California. Two gentlemen left here last week headed for Houston, Texas. One of our regular tenants is currently on the Gulf of Mexico in Orange Beach, Ala. You get the idea.”

The River Center’s primary purpose in Muskogee is to give the community at large recreational access to the same water resources that commercial and industrial outfits have taken advantage of for years. As such, the facility appeals widely to water lovers beyond boaters, offering annual events such as a Cardboard Boat Regatta, a Kids’ Fishing Rodeo, and runs and bike rides along the river. A pier also offers casual anglers the chance to cast a line.

“Sitting outside my office right now, I can see what looks like a grandpa and his grandkids, little ones, and they’re out here on the pier fishing,” Robinson says. “And to see that every day makes me feel like we have accomplished something important to Muskogee and to Oklahoma.”

Read more on why Muskogee is a water city.