Get the dirt on the Farmer's Market in Muskogee, OK and find out what kinds of vendors set up shop here. 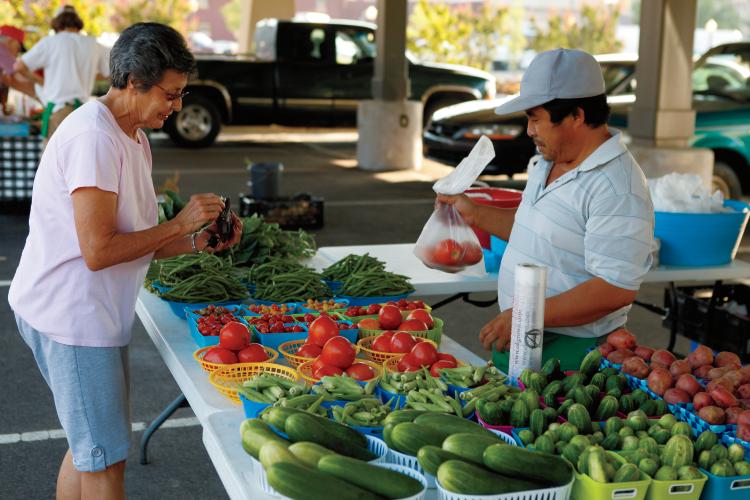 If it’s grown or produced in Oklahoma, chances are you can find it at the Muskogee Farmers Market.

Debuting in 1995, the market moved to its current location at Okie Square in April 2007. City leaders say the relocation to Okmulgee Street has contributed greatly to recent downtown revitalization efforts.

Open from the third Saturday in April through October, the market also hosts special events such as Herb Fest, Grill Crazy, Harvest Festival and the Muskogee Salsa Tasting Contest. But the vendors themselves are one of the more interesting aspects of market days.

“One of our vendors is a 90-year-old farmer – Durl Doyle – who drives in from Stilwell, hauling all of his produce to market in his own pickup truck,” says Doug Walton, manager of the Muskogee Farmers Market.

John and Pearla Shimack, owners of JPS Farms in Okay, are two more distinctive tenants. Pearla is originally from the Philippines, so the couple grows a variety of more unconventional produce such as bitter melons and Asian green beans.

“We also have a booth run by Maria Ledezma, nicknamed The Tamale Lady, who serves burritos, tortillas and authentic Mexican tamales that are still in their cornhusk wrappers,” Walton says. “In addition, the market features The Wine Guy – Rick Gibbens of Sailing Horse Vineyards in Eufaula – who produces wine with unusual names such as Red Tractor and Bo Peep. Rick does real well at the Muskogee market.”