How does a city reckon with its painful past and build an inclusive future? At Tulsa's Black Wall Street Gallery, healing begins with art and honesty. 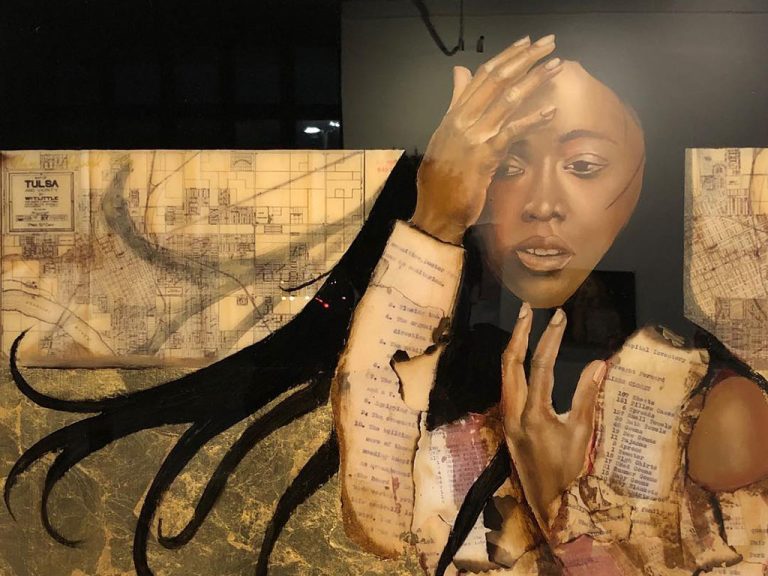 Many people — too many people — have never heard of Black Wall Street, a 35-block neighborhood and business district in Tulsa, Oklahoma, that thrived in the early 20th century.

And if they have, it’s only in the context of the Tulsa Race Massacre of 1921, wherein a white mob terrorized the city’s black Greenwood neighborhood (known as Black Wall Street), setting fires, looting businesses, razing more than 1,000 homes and destroying churches. In less than 24 hours, between 100 and 300 people were killed.

The history of Black Wall Street — if recounted at all in historical narratives — often revolves around the massacre, eclipsing the fact that the neighborhood was one of the most prominent and affluent African-American communities in the country. Black-owned shops, restaurants, movie theaters and nightclubs filled the district. The neighborhood became synonymous with jazz and “guitar licks and saxophones wails filled the streets,” as author Hannibal Johnson wrote in his book, “Black Wall Street: From Riot to Renaissance in Tulsa’s Historic Greenwood District.”

Despite a profoundly racist backdrop with the uprise of the Ku Klux Klan and public lynchings in the early 20th century, Black Wall Street flourished. It was a tight-knit community and an epicenter of entrepreneurship. Black Wall Street is a story that’s crucial to American history, in both its triumph and its tragedy. It’s a story that isn’t over yet.

In late 2017, scholar Ricco Wright moved back to his hometown of Tulsa and opened the Black Wall Street Gallery in one of the first Greenwood buildings to be rebuilt after the massacre. His goal? To make space for the community to confront the truth of its past and courageously create its future.

Now, Wright — a scholar, a poet, a mathematician, a modern-day renaissance man, really — is among those who are harnessing the entrepreneurial spirit of those Tulsa pioneers to rebuild Black Wall Street and provide the framework for leaders in other American cities who also grapple with their communities’ own history of racism.

Here’s a look at how this hip art gallery, which is expanding and re-opening in a new space this January, is helping confront decades of racism in Tulsa and beyond so that a healing movement can begin.

The Need for a Gallery that Celebrates Black Culture

Wright, a former Bill Gates scholar who earned his doctorate in mathematics at Columbia University, lived in New York City for a decade before moving back home to Tulsa. Upon his return, he spent about six months getting reacquainted with the city he had grown up in. He attended City Council meetings, he met with community leaders, and he linked up with artists.

“What happened, what changed everything, was when I started hosting these soirées at my home for everyone in the community,” Wright says. “There would be 200 some people at my house hanging out. It was incredible. That’s when I realized, ‘We’ve got a movement here.’ That’s when I decided to open the gallery.”

He needed a central space where people could come and engage in difficult dialogues.

A lot of people are prejudiced because they’re ignorant, Wright says. The gallery serves as a place where people can get to know others from different backgrounds. It’s a place where you can immerse yourself in black culture, via the records, artwork and discussion about history.

“I tell people it’s accidentally a gallery, meaning it’s really an events space where many different things are happening,” Wright says. In that spirit, any oppressed group has been allowed to rent out the space for free for events.

Wright didn’t want to simply write about philosophy. Rather, he wanted to bring people together and inspire a new way of thinking with the “socioracial idealism” model he created.

“It’s being honest about history, acknowledging it, and certain entities and individuals apologizing,” Wright says. “So, yeah, you didn’t play a part in what happened, say, in Detroit with Black Bottom, but you’re part of an institution that has benefitted from the atrocity of yesteryear, and acknowledging that this happened is important. Apologizing for what happened is important.”

The model also is about leveling out the playing field and paying out reparations, he explains. That doesn’t necessarily mean paychecks are issued to individuals, but instead, the economic system is shifted and more job opportunities are available for people from that community or descendants of survivors of racial violence, Wright explains. The education system changes, and there’s more emphasis on financial literacy and there are tools for people who need to deal with their traumas.

At the Black Wall Street Gallery, healing happens in many forms. Records spin. A comedy line-up will debut next year. There’s an idea that laughter and music can both heal.

Then, there’s the thoughtful curation of gallery series that are planned around the four tenets in the doctrine that Wright is prescribing. The presence of the gallery has spurred more businesses to open up, including a sneaker shop that hosts a live DJ. A record store will be opening in the gift shop of the gallery’s new space. More opportunities are being created for Tulsa’s creatives.

The first series, which paired black and white artists, was the conciliation series. Not reconciliation, because, as Wright explains it, that sounds nice, but takes too far of a leap, skipping over important work that has yet to be done.

“Reconciliation means restoring friendly relations, so we’re pre-supposing that we created these friendly relations and I can’t find in our history where we have,” he says. “We can’t restore something that’s never been created.”

Rather, he says, this country needs to grapple with the truth that there’s been a vicious legacy of white supremacy.

“We’ve got a legacy of slavery and segregation, and then once de-segregation happened, it led to white flight in many of our U.S. cities,” he says. “It’s not just Tulsa. Tulsa is merely a microcosm of the nation.”

The next planned art series in the gallery will debut in January and will center around healing.

A lot of people aren’t aware of Black Wall Street’s existence, past or present, Wright acknowledges. But when this neighborhood is discussed, there’s too much emphasis on the Tulsa Race Massacre and not enough of a focus on the Greenwood neighborhood as a whole, Wright says.

“There’s always this way in which the narrative is not so much black people doing for themselves and doing well as a result of that,” Wright says. “It’s more about how there was something destructive that happened to them or it’s more about slavery and not about freedom. We see it in Hollywood, we see it in the media. I’m often perplexed by this. I’ve heard and seen the slave narrative enough. What about these other stories about prominent black people who have done well and communities of color that have done well?”

In fact, Wright says, after the massacre, Greenwood was rebuilding and by the end of the decade was flourishing once again.

The original building that housed Black Wall Street Gallery was one of the first to be rebuilt after the massacre. It was the Royal Hotel, in the heart of Greenwood, and owned by Simon Barry, a savvy entrepreneur.

“To stand on the shoulders of such giants is truly an honor,” Wright says.

His hope for Tulsa, he says, is that it becomes a truly progressive city.

“I strongly believe that Tulsa could have been a leading city in this nation were it not for racism,” he says. “If we can do away with racism and xenophobia and all of these other isms, we can become what we were destined to be long ago.”