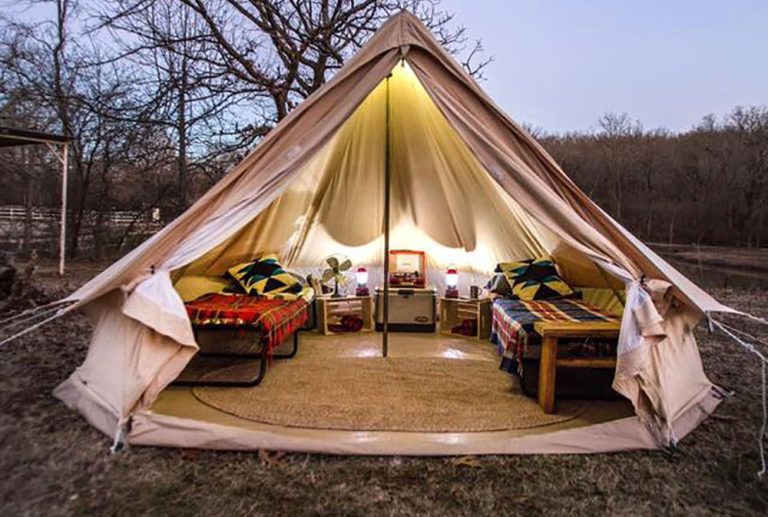 Located in the northeast corner of Oklahoma in what Okies refer to as “Green Country,â€ Tulsa is the second largest city in the state and is an impossibly cool place to live and visit. Once considered the “Oil Capital of the World,â€ Tulsa has its roots as an energy city, but is now home to a diverse workforce, a vibrant and historic downtown and an abundance of entertainment and cultural activities.

Here are eight reasons why you might want to start livin’ on Tulsa time:

Prohibition may not have officially ended in Oklahoma until 1959 (a good 26 years after the rest of the country), but Tulsa has managed to shake off its dry past by becoming a destination for beer lovers in the region. There are several great places to get your suds around town with local favorites that include Prairie Brewpub, Marshall Brewing Company and Dead Armadillo.

Thanks to the oil boom of the 1920s, the city decided to show off its newly acquired wealth by building skyscrapers that were in the popular style of the era: art deco. Tulsa has one of the country’s largest collections of art deco architecture, with buildings designed by architecture giants like Bruce Goff, Francis Barry Byrne and Frank Lloyd Wright. Much of the art deco collection is downtown (including the beautifully restored Mayo Hotel), which you can admire through walking tours or by visiting the Tulsa Art Deco Museum inside of the Philcade Building.

In 1926, Tulsa oilman Waite Phillips hired a prominent Kansas City architect to design an Italian Renaissance villa for his family on 25 acres. In a big surprise to the city, the Phillips family donated the villa and the surrounding acreage to the city in 1938 to be used as an art museum. The villa opened as the Philbrook Museum of Art in 1939 and is one of the finest art museums in the country, housing pieces by notable artists like Georgia O’Keeffe, Pablo Picasso and Kehinde Wiley as well as a vast collection of Native American artwork and African antiquities.

4. You Can Become a Scholar in Bob Dylan Studies

Sure, you may have had a Bob Dylan poster up in your dorm room, but do you have what it takes to be a scholar of “The Voice of a Generationâ€? You can get your chance at the University of Tulsa Institute for Bob Dylan Studies, which is an interdisciplinary research initiative from the university to study the influence and life of the folk singer and Nobel Prize winner. The institute works in cooperation with the Bob Dylan archive (also in Tulsa) and is planning on hosting an international conference on all things Dylan in 2019. Tulsa is also the future site of the Bob Dylan center and will be located near the Woody Guthrie Center.

5. Reach for the Sky with an Aerospace Career in Tulsa

Tulsa may have been originally known for its success in energy – and still remains a global leader in the field – but what many may not know about Tulsa is that it’s got a large presence in the aerospace industry. The American Airlines Maintenance and Engineering Center, located in Tulsa, is the world’s largest commercial airplane maintenance facility and employs over 5,000 people. The Tech Ops-Tulsa AA maintenance base has a long history in the city and was moved from New York City’s LaGuardia airport in 1946 after Tulsa’s major aircraft manufacturing contributions during World War II.

6. Tulsa is an Affordable Metropolitan Area

Tulsa may have big city amenities like a thriving arts program, a diverse business community and a beautiful downtown, but its affordability makes it stand out from other metropolitan areas. In 2017, Tulsa was named one of the top 10 most affordable cities, and according to Forbes.com has a cost of living that is 6% below the national average. Realtor.com also ranked Tulsa as no. 10 in their list of the top 10 housing markets of 2018 thanks to its median home price, which is lower than the national average, and its high percentage of homes that sell near their list price.

What started out as a 10-cent dance hall in the 1920s turned into one of the most famous small music venues in the world. Cain’s Ballroom in the Tulsa Arts District initially shot to worldwide fame due to Western swing legends Bob Wills and His Texas Playboys using it as their home base, but the ballroom became notorious in the music world when Sid Vicious from the Sex Pistols punched a hole in the venue’s wall during their infamous 1978 U.S. tour. Since then, it’s hosted legendary acts in its hallowed halls such as Van Halen, Kings of Leon, Bob Dylan, Brooks & Dunn, Loretta Lynn, Weezer and Metallica, to name a few.

8. Go on a Wilderness Retreat Just Outside the City

Located just a few miles outside downtown Tulsa, Turkey Mountain Urban Wilderness Area has over 300 acres of park land with dozens of hiking, biking and horse trails as well as climbing boulders. You’d never know you were so close to the city as you surround yourself with the rugged and remote beauty of “Green Countryâ€ and hike up Turkey Mountain, which overlooks the west bank of the Arkansas River.