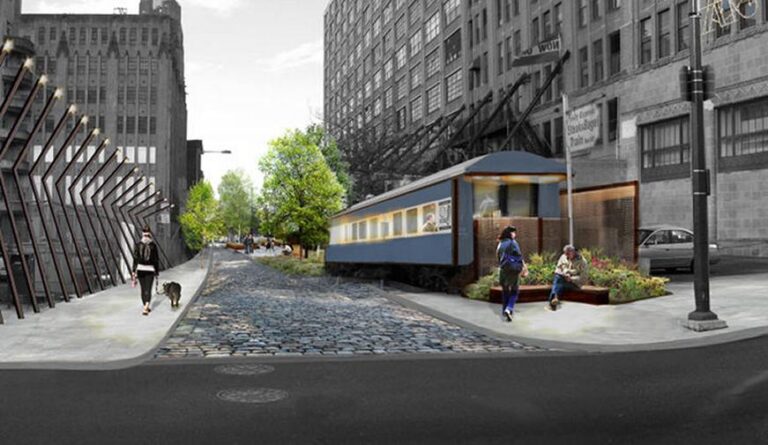 Worldwide, relics of the industrial age, from rail lines to factory footprints, are blooming before our eyes into reclaimed public spaces, filled with trails, trees and gathering places.

Philadelphia is home to one of the most ambitious such initiatives, a project advanced by nonprofit Friends of the Rail Park. Once completed, the Rail Park will be a 3-mile, linear parkway and recreation path traversing the historic elevated Reading Viaduct and City Branch rail cut of the former Philadelphia and Reading Railroad.

Organizers hope construction on phase one – a quarter-mile stretch on the east side of Broad Street – will begin in 2015, and they say the community is more than ready for the work to begin.

“There is almost universal enthusiasm in the city for this project. We’ve met with great support,” says Aaron Goldblatt, secretary of the board of Friends of the Rail Park and a partner in a local architectural firm.

Goldblatt provides leadership for the Rail Park alongside urban planner Leah Murphy (president); artist Sarah McEneaney; artist/gallery owner John Struble; and Liz Maillie, who co-founded the initiative along with the late Paul VanMeter, who was a landscape gardener and passionate rail historian.

“The project has full support and funding from the city, the state and several foundations,” Goldblatt says. “We’re closing in on achieving our $8.6 million goal.” Philadelphia’s Center City District has led the effort to design the first phase and raise the funds for its construction.

As more Philadelphians have caught the vision, private donations to the project have increased as well – providing a huge boost to those working tirelessly to help bring it to fruition.

“We’ve seen a groundswell of support from folks who are hyperventilating about this project and getting exciting about what it means to the city,” Goldblatt says.

Still, future phases of the Rail Park may be long in coming. Because the route will follow rights-of-way held by multiple owners, the legal process of securing the necessary property can be complex and lengthy. For example, Reading International Corp. owns the viaduct on the east side of Broad, the only elevated portion of the Rail Park. The City Branch, west of Broad, is a longer tract owned by Southeastern Pennsylvania Transportation Authority (SEPTA).

“The timetable is anyone’s guess, but we do believe the park has universal support, and we’re confident the legal process will run its course,” Goldblatt says.

Eventually, the Rail Park will connect several neighborhoods and existing parks, and will pass within steps of cultural landmarks including the Philadelphia Museum of Art (yes, home to the steps that big-screen boxer Rocky Balboa ascended) and the Rodin Museum.

New York City’s High Line, on Manhattan’s Lower West Side, is perhaps America’s highest-profile example of a railway conversion. Although Philly’s project is more expansive, the team there has studied the High Line, along with Chicago’s Bloomingdale Trail, Berlin’s Natur-Park Suedgelaende, the QueensWay in New York and the Promenade Plantée in Paris. Atlanta’s BeltLine is a similar trail system under development.

In Goldblatt’s view, projects such as Philadelphia’s are “a no-brainer.”

“Like in a lot of other cities, it just makes sense to say, ‘Let’s take this derelict property and turn it into something of enormous civic value.’ Most major post-industrial cities have this problem/opportunity, with unused freight and passenger rail line just sitting there dormant,” Goldblatt says.

For more details about the Rail Park, see the videos here and here.