A Toast to Pocono Wine and Brewing

Learn how wineries and craft breweries in the Pocono Mountains region are tapping into a growing market. 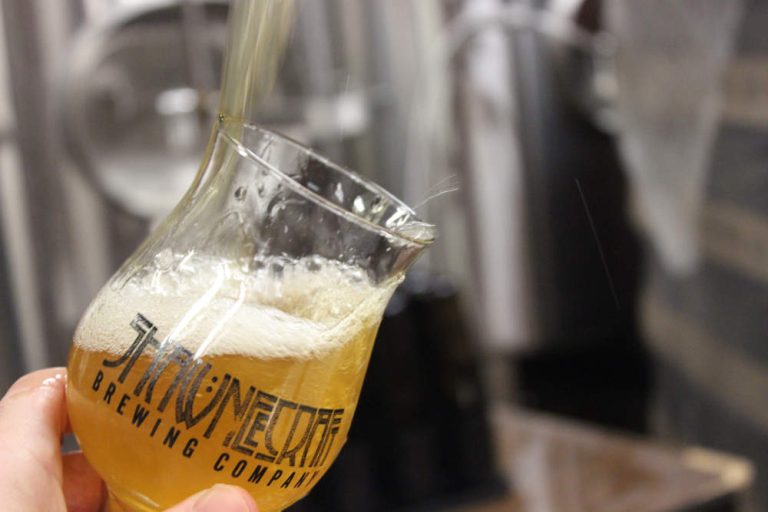 Three cornerstones were always present in the small towns that began popping up throughout Pennsylvania following the arrival of European settlers in the late 1600s, according to Trip Ruvane, president and co-founder of Barley Creek Brewing Company in Tannersville.

“They would build houses, then build a church, and then build a brewery,” Ruvane says. “What you’re seeing now in the Pocono Mountains is that we’re coming back to our early Pennsylvania roots. Nearly every town of any size has its own brewery or winery that’s contributing to the economic engine of each of these communities.”

Indeed, like a frothy draft creeping over the edge of a cold mug, the spirits industry is overflowing in the Pocono Mountains region in a significant way. Several new wineries and craft-beer makers have tapped into this growing market in recent years, and others have expanded their existing operations.

“We have really seen a growth in the overall industry,” says Tim Meyers, brewery manager at ShawneeCraft Brewing in Monroe County. “We’ve increased our production capacity every year (since opening in 2009). There are more beverage-inspired events popping up in the local area. It’s all across the board, from the people producing it to the marketplace buying it.”

The wine industry in the region has grown to the point where there is now an official Pocono Wine Trail. There are seven vineyards on the tour including Big Creek in Kresgeville; Blue Ridge Estate and Sorrenti in Saylorsburg; and Mountain View in Stroudsburg.

“Going on a beverage trail has become popular all over the country, and we’re trying to capitalize on that,” says Linda Rice, who co-owns Mountain View with her husband, Randy. “We each have our own style and a different feature that makes it interesting for visitors. That encourages people to go from one to another, to see what the next stop has in store for them.”

Mountain View has experienced enough success since opening in 2009 that the Rices already have expanded the operation to include a brewery, lunch bistro and larger venue for the winery. Rice says this will increase Mountain View’s ability to attract weddings and other events.

“The industry is growing so much that we’re able to expand into a much larger facility to support that growth,” she says.

The Pocono Wine Trail also offers some more subdued options, such as Big Creek Vineyard in Monroe County. The Strohlein family has owned the property for nearly 75 years and has been producing wine there since the 1990s.

“We’re kind of a throwback winery,” Big Creek owner Dominic Strohlein says. “It’s not about the number of people (who visit), it’s about the quality of the experience. That’s what we offer. It’s a quiet place. No loud music or parties. It’s all about conversation. We like talking to our customers.”

There is plenty of beer (and spirits) on tap in the Pocono Mountains as well. Barley Creek is a 10-barrel brewhouse with the capacity to brew 300 gallons at a time. The company also makes bourbon, whiskey, vodka and gin. More than a dozen weddings were held in 2016 on the 6-acre property, which includes a party pavilion and a Wiffle Ball facility.

“I like to say that we offer one of the best vacations during your vacation,” Ruvane says.

In Honesdale, the Iriving Cliff Brewery, which takes its name from a brewery that was started in the area in 1851, offers a full menu and 14 signature craft beers. Also in Honesdale is the Here & Now Brewing Co., which offers a variety of seasonal craft brews. ShawneeCraft Brewery, which is part of the Shawnee Inn and Golf Resort, places an emphasis on local ingredients. In fact, the brewery keeps bees on the property to make honey for some styles of beer, and grows pumpkins that are used in the production of seasonal fall beers.

“Our major philosophy is to be true to nature and true to the craft,” Meyers says. “We can give a customer a beer that was produced and packaged less than a week ago. We’re trying to not only produce local beer but use local ingredients to do so. And because of our location in the Pocono Mountains, we have a lot of tools to our advantage. The location is what makes the (beverage) products around here so special.”