Learn how communities like Jim Thorpe, Stroudsburg and Milford in the Pocono Mountains region, have preserved and restored their distinctive downtowns. 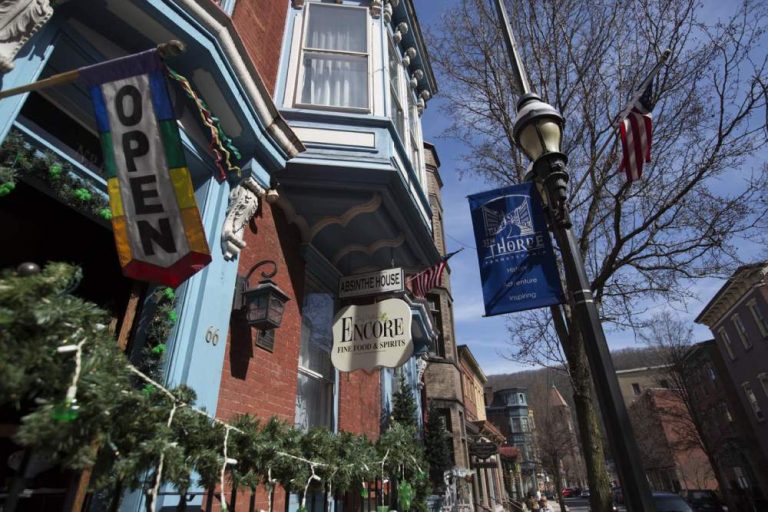 The Pocono Mountains Region has long attracted visitors looking for respite from the busy metro centers of New York and Philadelphia, and for many of the same reasons, it attracts new residents who want a slower pace of life still within reach of urban amenities. Meanwhile, they can enjoy playing a bigger part in the narrative of the many small communities throughout the four-county area.

In each of the county seats, preservation and revitalization efforts have yielded distinctive downtowns with unique characteristics and historical attractions alongside modern shopping, dining and cultural destinations.

Making the list for “cool towns” by Arthur Frommer’s Budget Travel magazine and “the prettiest county seat in America” by The Atlantic magazine, Milford (pop. 1,021) in Pike County, is located in the eastern part of the region and is considered the north gate to the Delaware Water Gap National Recreation Area. Founder John Biddis laid out the community in 1796, naming streets after family members and lanes after native fruits and berries. Milford incorporated as a borough in 1874, and architecture buffs will find excellent examples of work by many of the era’s most renowned architects, such as Calvert Vaux, Richard Morris Hunt and Frederick Law Olmsted, Jr.

The borough has its share of shopping and dining amid its historic buildings, plus cultural attractions and events such as the Black Bear Film Festival at the 105-year-old Milford Theater in October and the Milford Music Festival in June.

Admire the many colorful Project Street Art murals throughout Stroudsburg in Monroe County, located just five miles from the Delaware Water Gap. The borough has an overall population of 5,567 and is also adjacent to a population nearly double that in East Stroudsburg, home of East Stroudsburg University. Col. Jacob Stroud, whose family founded Stroudsburg in the mid-1700s, laid out the town in 1799.

Today, downtown Stroudsburg features scores of restaurants, shops and galleries, many within well-preserved historic buildings, thanks in part to the Stroudsburg Historic Preservation District Ordinance passed in 2006. Residents can attend music performances and dramatic productions at the circa-1928 Sherman Theater, which underwent restoration in 2004. The theater also hosts the Saturday morning Monroe Farmers Market indoor winter market during cold weather months until it opens each spring on the square for its outdoor season.

Residents in Honesdale can appreciate a “Winter Wonderland” first-hand here every year, as the town’s historic Central Park next to the Wayne County Courthouse is said to have inspired the song written in 1934 by native Richard B. Smith. The borough, which today has a population of 4,480, was laid out in 1826 at the starting point of the Delaware and Hudson Canal, which was used heavily in the 19th century for transporting coal. Honesdale also is known as the Birthplace of the American Railroad, because it is the site of the first commercial steam locomotive run in the U.S. in 1829. The Wayne County Historical Museum downtown houses a full-scale replica of the locomotive, The Stourbridge Lion, and the community’s National Train Days event in May also celebrates this history.

Other attractions today include hundreds of beautiful Victorian-era buildings, the Wayne County Farmers Market, year-round entertainment and educational programming at The Cooperage, and the Honesdale Roots and Rhythm Music and Arts Festival in June.

Lehigh Coal & Navigation Co. co-founder Josiah White established Jim Thorpe, originally named Mauch Chunk, as a company town in 1818, and civic leaders later renamed the borough in 1954 (after merging with East Mauch Chunk) in honor of Native American Olympic gold medalist Jim Thorpe. As of 2010, Jim Thorpe had 4,781 residents and in 2012 earned enough votes for fourth place in the “most beautiful small town” contest which was part of the Rand McNally/USA Today Road Rally series.