Port ranks No. 9 in the U.S. for tonnage and is looking to become a Top 5 port by the end of the decade. 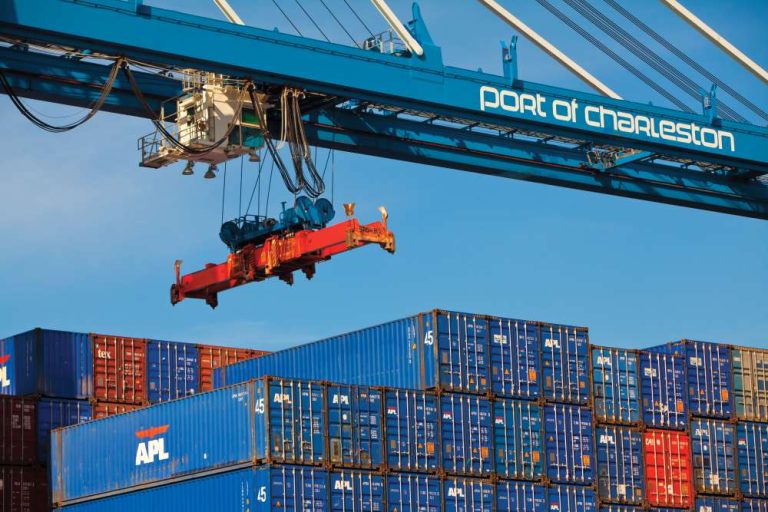 A powerhouse economy is built on the ability to move product, and South Carolina has the infrastructure in place that makes it a leader in logistics and distribution.

Chief among its assets is the Port of Charleston, which was cited among the key reasons for recent major location announcements by Volvo Cars and Daimler that will create thousands of jobs.

The Port of Charleston ranks No. 9 in the U.S. for tonnage and is looking to become a Top 5 port by the end of the decade.

“I believe we are the most important strategic asset for South Carolina because global businesses locate near ports today to make the cost of their supply chain cheaper,” says Jim Newsome, president and CEO of the South Carolina Ports Authority. “Also, Charleston enjoys a combination of increasing imports driven by population growth in the Southeast, plus our export market is growing because new manufacturing is being added to the region all the time.”

Newsome says one in 10 jobs in South Carolina is connected to the port, and Charleston provides a $50 billion economic impact.

“We import and export a lot of heavy cargo for big manufacturers such as BMW, Michelin, Boeing, GE and Bridgestone, and as a result, we will be deepening our harbor to 52 feet to handle even larger container ships,” he says.

The South Carolina Ports Authority also oversees the South Carolina Inland Port, which opened in October 2013 in Greer, about 200 miles inland from Charleston. The Greer site provides trucking and rail shippers with access to more than 100 million U.S. consumers within a one-day drive.

“An imported container that is unloaded at Charleston can be transported to Greer by the next day,” Newsome says. “The inland port will handle about 60,000 rail lifts in 2015, and it won’t be long until that number will reach 100,000 rail lifts a year.”

One of the many users of the South Carolina ports system is Techtronic Industries, a company with distribution centers in Anderson and Pickens counties. TTI imports power tools and indoor products from the Far East and then distributes them under brand names like Ryobi, Stok, Artic Cove, Dirt Devil, Homelight, Hoover, Milwaukee and Oreck.

“We use the Port of Charleston to import and then we distribute by using a strong presence of national and regional trucking carriers that are available in South Carolina,” says Ashley Burt, senior director of transportation at TTI-Power Equipment.

TTI announced in 2015 that it will construct an $85 million, 1.3 million-square-foot warehouse and distribution center in Anderson County that will ultimately create more than 200 new jobs.

“From a cost perspective of shipping products, South Carolina is very conductive for distribution companies,” Burt says. “Given our business model, SC’s available carrier capacity, makes it efficient for us to ship to markets throughout the U.S. as well as Canada and Mexico.”

The state does not do business by water alone. Class I rail carriers CSX and Norfolk Southern along with eight shortline railroads serve the state, and the South Carolina Public Railways operates three common carrier railroads: The Port Utilities Commission of Charleston, the Port Terminal Railroad and the East Cooper and Berkeley Railroad.

Five major interstates (I-20, 26, 77, 85 and 95) and more than 41,000 miles of state-maintained highways provide a fully integrated roadway network. The road system has attracted many distribution and logistics companies that are establishing large warehouse operations in the state, including Amazon, which is expanding its fulfillment center in Lexington County and also building a new fulfillment center in Spartanburg County.

Drug store chain Rite Aid is constructing a 900,000-square-foot distribution center in Spartanburg along the I-85 corridor that will employ nearly 600 people and support fulfillment of approximately 1,000 of its stores in the Southeast.

“The Spartanburg site is a $90 million project that will become our most modern distribution center,” says Wilson Lester, Rite Aid senior vice president of supply chain. “We plan to ultimately consolidate our Charlotte, Tuscaloosa and Poca, W. Va., facilities into the Spartanburg site. I appreciate working with organizations such as readySC that is helping us with our recruiting efforts and training of new associates.”