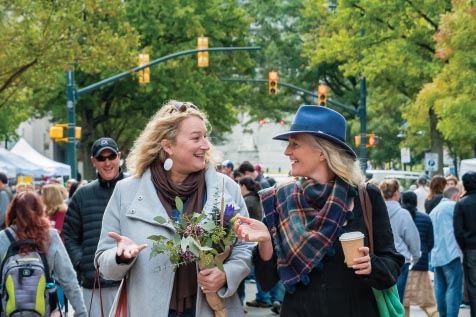 It didn’t take long for Jess Ledezma to appreciate the decision she made to move to South Carolina from her hometown of Traverse City, Michigan. All she had to do was step outside.

Ledezma arrived in Charleston in January 2019 to pursue her goal of becoming a chef. While she wasn’t sure what to expect, she immediately discovered one thing she fancied about her new home: the weather.

“When I left Michigan, we were literally being chased by an ice storm, then when I got to South Carolina, the temperature was in the 50s, which for me is T-shirt weather,â€ Ledezma says. “So the climate here is really nice. It’s been great to go to the beach in the fall and actually enjoy it and not be freezing.”

The wonderful weather is one of the many reasons that nearly 170 people on average move to South Carolina every day, with young professionals making up a significant portion of that number. Other draws are the state’s affordability, diverse employment opportunities, varied entertainment options and a wide range of outdoor recreation possibilities.

It also helps that newcomers can easily find a career that matches their skill set, especially in the technology-driven industry sectors of advanced manufacturing, advanced materials, aerospace, agribusiness, automotive, distribution and logistics, and life sciences. This widespread employment demand enabled the state to add more than 87,000 nonfarm jobs in 2019 alone.

In addition to the weather, many newcomers are enticed by the state’s low cost of living, led by housing prices that are 16% below the U.S. average. Conversely,

per capita personal income in South Carolina increased 17% between 2012 and 2017, outpacing the national average and ranking the state 13th in the nation.

“The cost of living here is much more affordable than where I’m from,â€ says Michael Ciaccia, a native of Rochester, New York, who works as the audience development and sales manager at the Peace Center, a performing arts venue in Greenville. “The taxes are much lower, and the economy is wonderful. When I first moved here, I was able to afford a nice apartment that was only about 10 minutes from downtown, then I bought a house, and that was a very easy process.”

Like Ledezma, Ciaccia is also a fan of the weather, especially after living so many years in western New York. “I can’t tell you how many mornings I now wake up to a sunny day with a beautiful blue sky,â€ he says. “Where I’m from, there were way many more cloudy days, not to mention all the snow.”

The mild weather is conducive to an active lifestyle, and outdoor recreation choices, like hiking, biking and water activities, are plentiful. Dining, shopping, entertainment and arts options are also abundant.

“There’s a big variety of restaurants, bars and live music,â€ Ledezma says. “The food is really good. You can always find shrimp and grits, and fried chicken is everywhere. I haven’t been disappointed with anything.”

Ciaccia agrees, saying he has been especially impressed with the arts scene in Greenville and beyond.

“That’s one of the things I looked at before I moved to South Carolina, whether there are opportunities for local artists and performers,â€ he says. “One of the great things about living here is how the arts are extremely well-supported by the local community.”

And the local community is known for embracing newcomers. Ledezma says she was somewhat concerned about moving to a place where she did not have a built-in base of friendships. But the warm weather Ledezma experienced when she first arrived has been matched by the warm reception she has received from the locals.

“People are very friendly here,â€ Ledezma says. “I moved here solo, so I was a little worried about making friends, but I haven’t had a problem with that. You can talk to people and get to know them easily. I really enjoy it.”