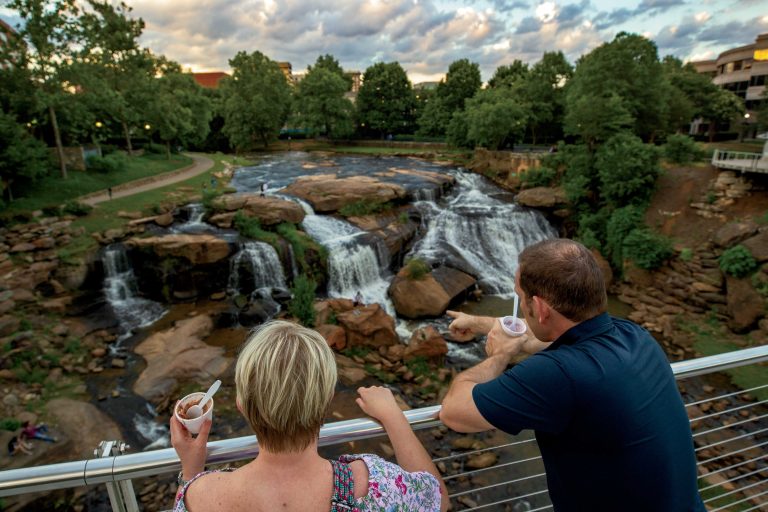 “It wasn’t part of the plan to move to Greenville,â€ says Jon-Michial Carter, co-founder and CEO of ChartSpan. “Our plan was to come here for six months [as part of The Iron Yard accelerator], then get back to Texas and launch our business.â€

“What happened is we got to Greenville and fell in love with the place; things happened for us here that would never happen in a large city. At the end of the program the city leadership asked, ‘What would it take to get ChartSpan to stay in Greenville?’ We were two guys in a garage but they thought we would become something.”

Fast forward four years and ChartSpan–which provides care coordination services for doctors’ patients–has become something. With over 200 employees, ChartSpan is one of the largest employers in in the downtown area, growth which Carter attributes, in part, to “the genuine desire for leaders of this city to help a startup like ChartSpan succeed.â€

“I have dozens of stories about how city leaders helped us overcome an obstacle,â€ continues Carter. “Frankly, we have an unfair advantage being in Greenville compared to the startups we compete against because we can accelerate faster.â€

In fact, Greenville has given ChartSpan so much support that the company feels compelled to give back by doing community service.

“I do it on a personal level, the leadership team does it, and every quarter our employees embark on a philanthropic endeavor for a day,â€ says Carter. “We’re committed to giving back as we’re fervent fans of this city and its future. We’re thrilled to be here.â€

“I started my business in Atlanta but I got to the point where I felt like I was floundering there,â€ says Kenzie Biggins, CEO of Worxbee, a business that can best be described as “everything executive assistants.â€

She happened to tell her mentor–a high-profile leader in Atlanta–about Greenville’s minority business accelerator. Her mentor replied: “I’ve heard about it and I’ve been on a tour. You should move to Greenville!â€

Biggins took the advice and moved north with her then-fiancÃ©e a few weeks later.

“We love it,â€ adds Biggins, noting that she and her husband have purchased a house in the West End. “I love being in a walkable community, which has allowed us to be a one-car household, which is very important to me.â€

Greenville Business and Education Leaders Work Together to Strengthen Schools

Meanwhile, Greenville has also revealed itself to be a great place to grow a business like Worxbee, which provides virtual executive assistant support, as well as headhunting services for executives in need of an assistant.

“I’m a black female and you don’t come across many cities that invest in minority-owned businesses. A lot of cities say they support entrepreneurs, but they are typically supporting the rock star of the moment, not the entrepreneurial community,â€ says Biggins, who is involved with a variety of local organizations.

“I do most of my community work through The Links,â€ she continues, “but I’m also involved with the innovation community through NEXT, and part of a networking group called Cake & Whiskey.â€

Clearly, whatever Biggins is doing in Greenville is working–both personally and professionally.

“Since I moved here I have quadrupled the size of my business,â€ she concludes. “I’d like to think that is because of the business accelerator and feedback from community leaders.â€

“This is the first place I’ve lived where I truly feel at home, so much so that I may retire here,â€ says Stijn Van de Velde, co-founder of Execution Partners, a consulting firm that helps clients with project management and process improvement.

So it’s fortuitous that Van de Velde ended up in the Upstate, arriving by way of Ohio after taking a job at a Belgian company that sent him to work at their plant in Greenville.

“As a recovering Belgian, I can definitely appreciate the ample blue skies and sunny days, as well as Greenville’s magnificent downtown area. Simply walking along Main Street or crossing Liberty Bridge–on my way to yet another meeting–makes me happy.â€

But what makes Van de Velde even happier is having so many customers and potential customers within driving distance, as Greenville and the Upstate have become a manufacturing powerhouse.

“The whole area is brimming with investment, activity and growth. I’ve never lived in a place with so much opportunity,â€ he says, which helps explain why Van  de Velde is introducing his adopted hometown to people back in his homeland, serving as the liaison between Greenville and its sister city of Kortrijk.

“Last May, a group of 20 people came from Kortrijk to visit. Everyone was amazed at what Greenville has to offer,â€ he begins.

“The city has such a great vibe to it. Mayor White and others have done an incredible job of making Greenville a vibrant place to live, work and hang out.â€