Affordability and big-city amenities make a winning combination in Greenville. 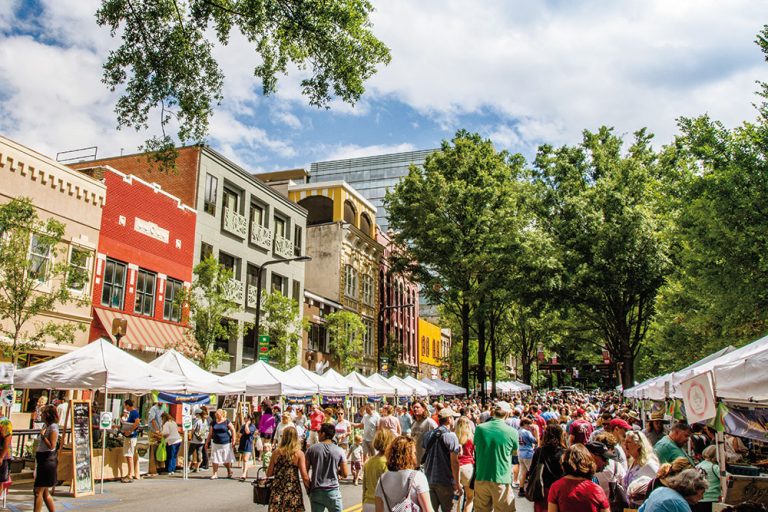 Join the more than 500,000 people who call Greenville County home, thanks to its rich history, riverfront parks and trails, and an impressive quality of life. Located in northwest South Carolina, Greenville is full of youthful energy and offers an affordable cost of living for young professionals and families alike.

The region ranks among the most attractive in the U.S. for millennials and young professionals. Its strong job market and diverse economy added to the city landing a spot on Livability’s Top 100 Best Places to Live in 2020.

“Greenville packs such a giant punch in a quaint town,â€ says Cara Sinicropi, a local writer and blogger. “In just a few square miles, we have 70+ restaurants, tons of shops, both by small businesses and large brands. You’re an hour from the mountains or three hours from the beach, close to two major cities, and in our town, we have everything you could want.”

Greenville boasts big-city amenities and a wealth of housing choices, but without the high-dollar, big-city prices. The overall cost of living and housing costs are below the national average and lower than many peer cities in the Southeast. The median home price in Greenville was $207,000 in April 2020, according to Zillow.

It’s easy to get around – and to and from – Greenville, thanks to its location along the rapidly growing Interstate 85 corridor. The city is only two hours from Atlanta, 90 minutes from Charlotte and 90 minutes from Columbia – the capital of South Carolina.

Get Out and About in Gorgeous Greenville

Commute times for residents average 22 minutes, and nearly two-thirds of commuters have a drive time of less than 25 minutes.

Greenville is a major foodie city, and there’s something delicious for everyone. The food scene is so vibrant that there are tours dedicated to the city’s culinary all-stars, including a BBQ Trail, Breakfast Tour and International Coffee Course.

If craft beer is your thing, you’ll be in heaven here, since there are more than 15 craft breweries in the region.

This is also a community chock full of arts and entertainment, with museums, galleries and several theater troupes.

If you like the performing arts, places to enjoy include Alchemy Comedy Theater, Centre Stage, Greenville Theatre and Warehouse Theatre. A gem among the region’s performing arts venues is Peace Center in downtown Greenville. Located on a six-acre site at the Reedy River near Falls Park, the center includes a concert hall and theater and hosts a variety of events, including Broadway tours, concerts and dances.

Resident companies at the center include Carolina Ballet Theatre, Greenville Symphony Orchestra and the Greenville Chorale. For big-time concerts, plays and sporting events, Greenville is home to the 16,000-seat Bon Secours Wellness Arena, and the 5,000-seat Timmons Arena on the campus of Furman University.

Greenville preserves and celebrates its culture and heritage through standout museums, such as the Children’s Museum of the Upstate, Upcountry History Museum and Carolina Music Museum, the latter of which houses the renowned Carolina Clavier Collection – more than 40 English, European and American pianos and harpsichords dating from 1570 to 1845.

Greenville boasts a mix of galleries that one might only expect to find in a much larger community. The Greenville County Museum of Art features the world’s largest public collection of watercolors by Andrew Wyeth. Bob Jones University Museum & Gallery displays works of Old Masters such as Rubens, van Dyck, Tintoretto and Cranach.