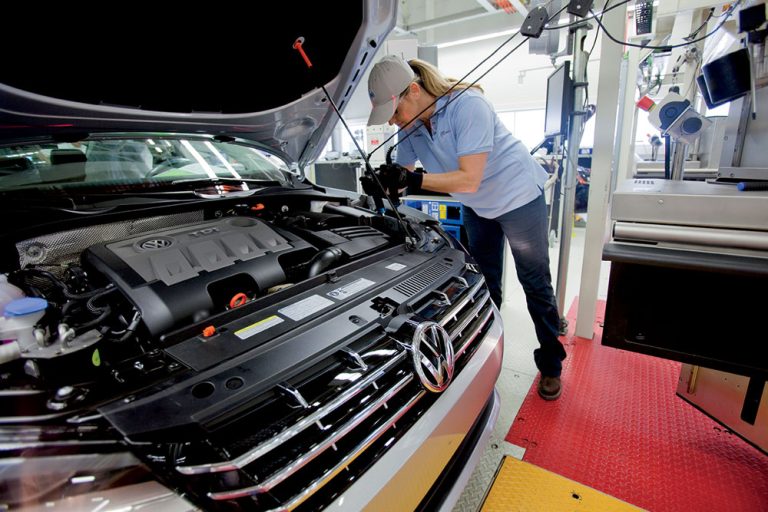 If the products that make our lives more comfortable and convenient had a label – from the flooring under our feet to the soft drinks and baked goods in the kitchen or the vehicle in the garage, there’s a good chance it would say “made in Greater Chattanooga.”

Products known around the world originate from throughout the 16 counties of the region, where manufacturers benefit from a job-ready workforce and enjoy logistics advantages, abundant water resources and low energy costs.

Whether they have instantly recognizable names, such as Shaw, Mohawk, Volkswagen, McKee Foods, Coca-Cola Bottling and Mars Inc., or are better known within their industries, Greater Chattanooga’s manufacturers are investing hundreds of millions of dollars in new and expanded operations and creating thousands of jobs.

The advantages of being located closer to customers in the center of the floor covering universe convinced W.F. Taylor to move its corporate headquarters from Southern California to Dalton, Ga. The company makes flooring adhesives.

“By having senior management and related support staff in Dalton, W.F. Taylor will be in a position to strengthen relationships with key customers in the flooring industry. That means we can better collaborate with them and deliver the products and services they need to be successful in their specific markets. We are in a better position to drive our strategic growth and product innovations for years to come,” says Dan Pelton, the company’s CEO.

In addition to its corporate headquarters, W.F. Taylor operates one of its manufacturing facilities in Dalton. The 85,000-square-foot facility produces a wide range of adhesives and floor preparation products for broadloom carpet, carpet tiles, hardwood, laminate and resilient flooring applications.

Volkswagen, which in 2008 decided to locate in the region, is investing $900 million in its Chattanooga complex to manufacture the Atlas, a new SUV model. Suppliers are expanding as well, attracted by the region’s location in the heart of the Southeast’s “automotive alley.” Yanfeng Automotive Interiors opened a new manufacturing facility in Chattanooga to make interior components, including floor consoles, instrument panels and trunk trim for the Atlas. The new facility represents a $ 55 millionn investment and creates 325 new jobs. Chattanooga Seating, another supplier, is investing $5.4 million in Hamilton County, creating 190 jobs.

An Ernst & Young report found that VW was responsible for 17,000 direct and indirect jobs that provided more than $1 billion in income.

Pennsylvania-based plastics manufacturer Audia invested more than $60 million in a new 300,000-square-foot facility in Walker County, Ga., where it initially is creating about 150 jobs. That number could double over time.

Lodge Manufacturing, the cast-iron cookware maker, announced the largest expansion in its 120-year history. It will include a 127,000-square-foot foundry that will increase production capacity by 75 percent. South Pittsburg, Tenn.-based Lodge will add 90 new jobs, bringing total employment to around 400.

In Rhea County, famed upholstered furniture maker La-Z-Boy, which has been a major employer in the community since 1973, will invest about $26 million in its Dayton operations over three years and create 115 new jobs. The new investment includes the addition of an Innovation Center as well as logistics facilities.

An expansion by Chattanooga-based Astec Inc. will create as many as 300 jobs. The company, the largest subsidiary of Astec Industries, invested in a 24,780-square-foot addition that increases its capacity to manufacture equipment for wood pellet plants and asphalt mixing plants. Wood pellets are a popular energy source in European countries that are reducing their  coal use.

A fixture of the region’s manufacturing sector, Astec designs, manufactures and markets a complete line of continuous and batch-process hot-mix asphalt facilities, and soil remediation equipment. With the expansion, Astec Inc. occupies more than 500,000 square feet of manufacturing and warehouse space in Chattanooga.

“We have some room to grow and we intend to be doing that,” says Malcolm Swanson, the company’s president.