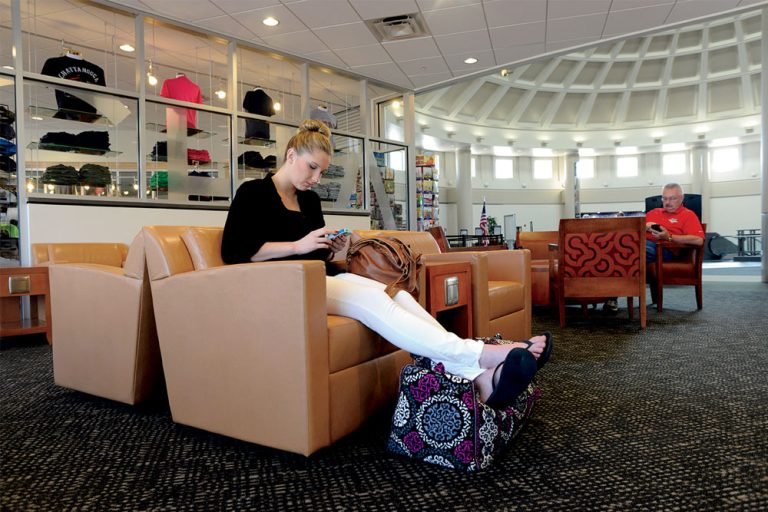 Expectations are sky high at Chattanooga Metropolitan Airport, which served more than 419,000 passengers in 2016 – a one-year record and the first time the airport has soared beyond the 400,000 passenger count.

The airport plays an integral role in the region’s transportation infrastructure, which includes access to major highways like Interstate 24, I-59 and I-75 and Class I freight rail carriers CSX and Norfolk Southern.

“There is a lot of economic development occurring in Greater Chattanooga, and the airport plays a vital role in that,” says Terry Hart, president and CEO of the Chattanooga Metropolitan Airport Authority. “We have a mobile economy in Greater Chattanooga with many people needing to get wherever they need to go, whether it’s domestic or international destinations. We accommodate those travelers.”

Chattanooga Metro flies to six major hubs – Atlanta, Charlotte, Chicago, Dallas, Detroit and Newark – that can then connect passengers to cities throughout the world. Hart says if passenger numbers continue to rise, airport officials could potentially add Denver and Houston to the hub list. United added nonstop flights to Chicago and Newark in fall 2016.

“We are convenient and cost-attractive to passengers as far away as Knoxville, Atlanta and northern Alabama, and the airport is a big contributor to the local economy,” he says. “More than 750 employees work for the airport, airlines, car rental agencies and other different capacities.”

The transportation assets in the 16-county, three-state region have made it a draw for distribution operations for companies such as Amazon.com and Children’s Place and for major trucking and logistics companies including Covenant Transport, Kenco, Lily Transportation and U.S. Xpress.

Construction has begun on a $24 million “inland port” in Murray County, Ga., that will open in 2018, allowing big containers to be hauled by trucks to Murray County for loading onto freight rail. Those trains will then travel 335 miles to a Garden City, Ga., terminal northwest of Savannah for eventual shipment via the Atlantic Ocean. Chattanooga’s Volkswagen assembly plant is expected to be one of the largest inland port customers.

“We are midway between the major Southern growth cities of Nashville, Atlanta and Charlotte, with good distribution corridors to those big cities as well as Chattanooga,” says Doug Berry, vice president of economic development for the Cleveland/Bradley Chamber of Commerce. “This whole region is attractive to manufacturers and distributors because we are within a day’s drive to 70 percent of the U.S. population.”

Cleveland Regional Jetport, situated among 400 acres of rolling hills and farmland in Bradley County, Tenn., boasts a new terminal building to welcome passengers from corporate jets and general aviation aircraft of all sizes.

“There are 14 Fortune 500 companies doing business in Cleveland, so we have a who’s-who of airport corporate users,” says Mark Fidler, director of Cleveland Regional Jetport.

Among the major corporate users of the airport are Whirlpool, M&M Mars, Bayer Pharmaceuticals, Chick-fil-A and Coca-Cola.

Fidler says Jetport upgrade plans in 2017 include a 700-foot extension of the runway to bring it to 6,200 feet.

“We are also in discussion with U.S. Customs and Border Protection to secure customs clearance services for our international flight customers who arrive and depart the Jetport,” he says. “Our Jetport is one of the state’s fastest-growing airports, keeping pace with all the growth throughout the entire region.”