A thriving culture and cuisine scene draws and retains residents. 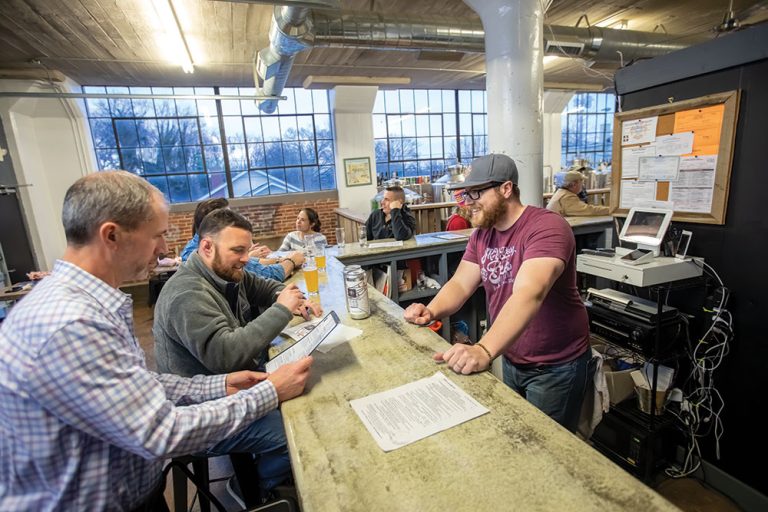 Zachary Fox calls it the southward expansion. It is the stream of new residents pouring into Maury County from Nashville, where their dollar goes further and they can bypass traffic hassles but still enjoy a wealth of quality of life advantages, from a flourishing arts scene to restaurants serving mouthwatering cuisine to a list of breweries whose local beers on tap are just waiting to be sipped by the next person who walks through the door.

“The community has a vibrant scene with tons of awesome artists and musicians that live, work and play here,â€ says Fox, co-owner and head brewer at Bad Idea Brewing in Columbia. “There’s been a southward expansion of people who are looking to bypass the traffic and expense of cities like Nashville. We have restaurants and events that rival anything there. It has become an exciting place to be.”

At the heart of Columbia is the Columbia Arts Building (CAB). This four-story multi-use building in the burgeoning Columbia Arts District features a studio space used by artists and makers on a rotating schedule. The CAB also includes Muletown Collective, a co-working and event space, and CAB Movement, a fitness studio offering everything from aerial yoga to kickboxing. Second-floor retail space includes a brewery, a flower stand, an artist’s market, a vintage shop and a juice shop.

“The building is this industrial, gorgeous space like something you haven’t seen before,â€ says Ross Jaynes, former chair of the Columbia Arts Council. “While Columbia does the popular First Fridays, the CAB does Last Fridays, where everyone does something special along a theme, and there’s music and a combination of things to see and do, and people can interact with the art however they choose.”

Columbia is known affectionately as Muletown, as it has held an event called Mule Day since 1840. Plus, the area has been the center of mule breeding and military mule training for decades. With that hook, the Columbia Arts Council has been active in supporting several mule-themed murals across town on public walls and in schools.

“It’s a hot topic around here!â€ Jaynes says. “Public art has always been a focus of the Arts Council.”

Nearby, Spring Hill hosts its own art-centric event, the Spring Hill Art Walk, where attendees can view and buy work displayed by artists as well as visit food trucks and take part in family activities.

Residents enjoy a number of breweries in Maury County. Bad Idea Brewing recently opened its doors in the CAB, serving beers ranging from Kolsch to IPAs. Asgard Brewing Co., whose name is drawn from the founder’s Nordic ancestry, serves both its own brews and those from other craft brewers. Smawls Tap Room, which offers 18 taps to choose from plus bottled beer, and Taps Off Main, which features 25 tap beers in its roster.

“As a self-owned brewery, the community, city and county have helped us along the way,â€ Fox says. “We couldn’t do what we’re doing here anywhere else.”

More for Many: Maury County is Overflowing with Opportunity

In addition to places to grab a drink, Maury County is home to a number of unique eateries that range from the locally owned, allergy-conscious restaurant The Dotted Lime to Marcy Jo’s Muletown, which offers up scratch-made Southern favorites.

“What I love about Marcy Jo’s is the atmosphere. All locations – it’s two restaurants and a bakery – are housed in buildings from the 1800s, and we make everything from scratch,â€ says Marcy Gary, co-owner of Marcy Jo’s. “It’s home cooking, and no one does that anymore.”

Startups Are Thriving in Maury County

Locals love to get their pizza fix at DB’s or Red 7 Pizza Co. or line up for barbecue at Abe’s BBQ Smokehouse. Good dishes are accompanied by music, of course, and area residents head to Puckett’s Grocery & Restaurant for jazz brunch every month or check out the tunes played at Vanh Dy’s upstairs speakeasy lounge. Spring Hill also hosts Pickin’ in the Park each year, where attendees can bring a lawn chair and a picnic dinner and listen to music.

“Maury County is attracting new residents who value community, small-town living and a slower pace of life but don’t want to compromise arts and culture, local food and drink, and small businesses. They’ve found a haven where they can escape the hustle and bustle of the city without losing out,â€ Gary says. “Columbia has come a long way in the last few years, and it’s been great!â€