They say a picture is worth a thousand words and if these walls could talk they would have a lot to say. 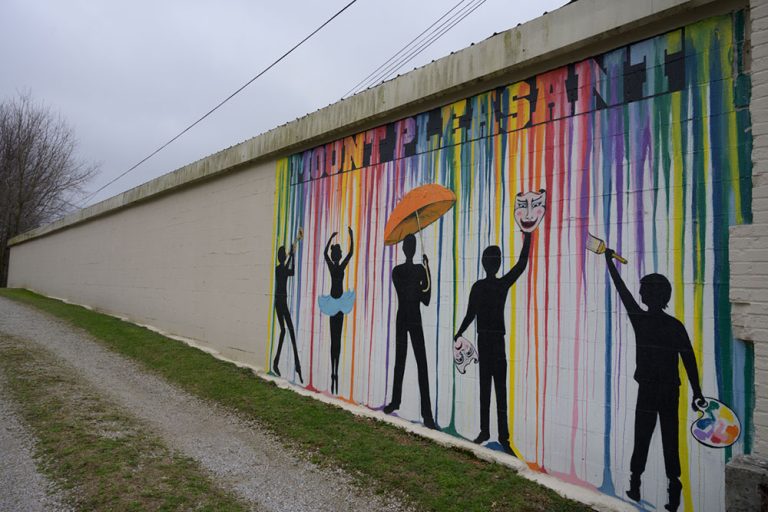 The Columbia Arts District, established in 2016, is located adjacent to downtown Columbia and includes artists’ studios, galleries, art shops and the century-old Columbia Train Depot. The Columbia Arts Building, a 12,000-squarefoot historic industrial building, offers studio spaces for working artists and makers, art classes, a retail shop and some of the best selfie spots in the state.

These six works of public art can’t be missed!

The King Mule mural, located on the exterior of Linen Duck store, features Columbia’s cherished mascot adorned with a crown and surrounded by colorful flowers. Designed by artist Whitney Herrington and painted by Quantagus Sanchez Mcfall, the vibrant mural is a popular selfie spot for locals, tourists and even a few former Mule Day queens.

Designed with a play on words, a vibrant head of a buck graces the outside of its namesake Buckhead Coffee. Created by Josh Kennedy, owner of Mule Town Sign Co., which creates hand-painted signs, lettering pieces and woodwork, the mural is a piece of art with 46 different colors. Grab a coffee and a selfie!

3. The Dimple of the Universe

Decked out in navy, red and white, The Dimple of the Universe mural was designed and painted by Bryson Leach and can be spotted on the north side of his shop, Needle & Grain. The mural is a nod to the oldest nickname for Maury County. Leach wanted to bring back the endearing tagline of his hometown.

Bryson Leach’s first mural, a cock-eared mule that he designed and painted in blue and white, is located at Row & Co. in the Arts District. As a full-time designer and creative who grew up in Columbia, Leach wanted to use the simple mule as a movement to get people excited about Columbia’s past and future. He first made the design symbol for MyColumbia, using it on stickers, and then brought the mule to life with a mural.

That same beloved mule by Bryson Leach is also splashed on the rock wall of Heritage Bank & Trust, but this time the mural is painted in the bank’s colors of green and white. Muletown’s bank customers often leave with money and a snap of the popular mural.

Choose your favorite pose to make in front of the dance mural in downtown Mt. Pleasant, the work of artist Bedford Smith, who relocated to Mt. Pleasant from New Orleans after Hurricane Katrina.