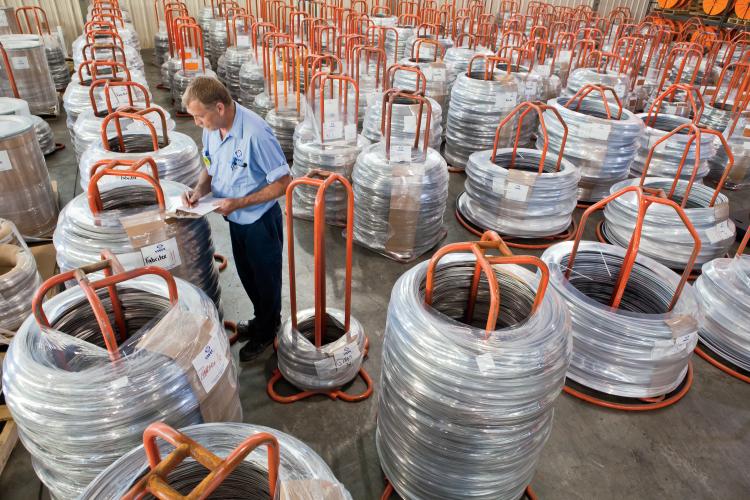 American companies have been attracted to Dickson County’s central location and quality of life for decades, but in recent years several international companies have discovered the region’s many incentives as well.

Sumiden Wire Products Corp. opened its Dickson County location in 1990. It is a subsidiary of Sumitomo Electric Industries Ltd. in Japan.

“There were two main reasons Sumiden Wire chose Dickson,” says Brian Burr, general manager at Sumiden Wire Products Corp. “First, the area is centrally located to minimize distribution time to the majority of our customers. Second, the city and county officials made a big impact with their very hospitable welcome during the initial site visit.”

“Dickson is a great place to do business for a number of reasons. It is close enough to a large metropolitan city for quick, efficient travel,” Burr says. “The people are accepting of other cultures. The area is safe for overseas employees and their families to reside. And Dickson County has a reasonable cost of living relative to other areas.”

Bridgestone APM is another Dickson company with roots in Japan. Bridgestone APM’s Dickson facility opened in 2003 and produces shock-absorbent pads and interior cushions for automakers.

Like Sumiden Wire, Bavarian Polymers USA Inc. chose Dickson County for its central location. The company’s German owners opened the Dickson-based company in 2006, along with a second location in Mexico for warehousing.

“Logistically, Dickson’s central location within the South is a one-day transit time for shipping to the majority of our customers,” says Amanda Berry, executive assistant at Bavarian Polymers USA Inc. “The vacant building [we occupy] was already structured for plastics manufacturing and included rail access, both of which were major deciding factors.”

Being close to the Nashville International Airport is another plus, and quick transit times to shipping ports helps keep costs down.

“Dickson is a great small community,” Berry says. “We have found great local, long-term employees and vendors, who ultimately are responsible for our continued success.”

Canada-based MetriCan Stamping LLC built a 75,000-square-foot facility in Dickson in 2005, divided into four manufacturing areas for metal stamping, value-added assembly, tool repair, and warehouse and shipping. Dickson is MetriCan Stamping’s only U.S. location – the company’s other sites are all in Canada and Mexico.

Mexico-based Nemak opened a Dickson facility in 1987, and employs more than 420 people. Nemak manufactures aluminum components such as engine blocks and transmission parts for the automotive industry. The Dickson plant focuses on producing cylinder heads, and has the capacity to manufacture more than 2.6 million units per year.