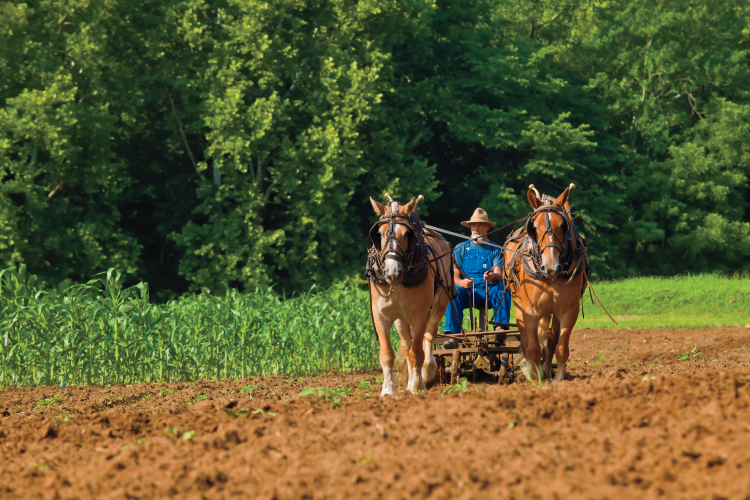 Agriculture has always had a big impact on the Dickson County economy.

But beyond taking their crops and commodities to market, farmers are now opening their farms to agritourism, which allows visitors to see how food is grown, raised and harvested.

The concept isn’t entirely new here: For more than 40 years, the local agricultural community has put out the welcome mat during the annual Dickson County Farm Tour, organized by the Soil Conservation Office.

With spots limited to 200 participants, three or four school buses are enlisted to take tour-goers to various stops, which are diversified every year concentrating on a different area of the county. Not only do farms receive visitors, but participants can also learn about forestry and soil erosion.

The day ends with the Dickson Farmers Co-op offering refreshing watermelon to all participants.

“That’s how our community comes together. Everyone is always willing to help,” says Karen Seals, loan officer at Farm Credit Mid-America.

In addition, there are several farms that serve as destinations during certain times of the year.

Keller’s Corny Country, which opened in 2008, offers a large autumn pumpkin patch and corn maze in Dickson. It’s also a great spot for school field trips with hay rides, barrel train rides and a monster slide. The barn is a popular wedding venue as well.

Every Memorial Day weekend, Three Creeks Farm presents the Middle Tennessee Fiber Festival, an opportunity to take weaving, spinning and knitting classes, see demonstrations or shop the vendor booths. During the rest of the year, school groups and visitors can view the sheep, goats and chickens that live on the farm and take in demonstrations on blacksmithing, hand-spinning and shearing.

Fall is a good time to be at Harmony Farm in Charlotte with hay rides, a sorghum maze, petting zoo and corn crib. Berry Farms in Dickson also offers the Harvest on Hayshed pumpkin patch in the fall.

Farming history is a big draw at Miller Century Farm in Charlotte, and the picturesque farm offers a perfect spot to plan a rural-themed wedding.

Other wedding and event venues include Cactus Creek Barn in Dickson and Cajun Lake Lodge and Old Spencer Mill, both in Burns.

Among the 1,143 Dickson County farms counted in the 2012 Census of Agriculture, 26 of those are designated century farms, which means they’ve been in the same family for 100 years or more.

A majority of farms support beef cattle. But there are also quite a few tobacco farmers in the northern parts of the county, Seals says.

“We want people to be aware of the importance of agriculture to our communities and our nation. If we don’t have farms, we don’t have anything,” Seals says.