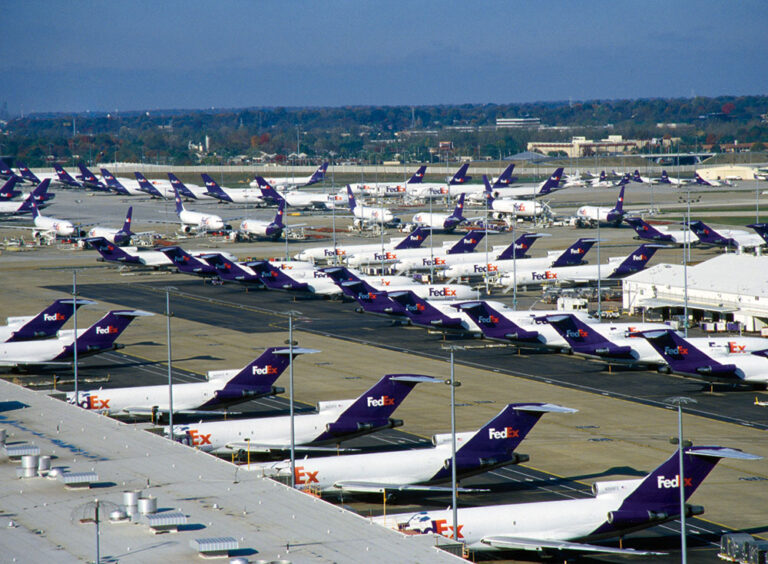 Tennessee is a global logistics leader, strategically positioned for access to major U.S. markets, 60% of which are within a day’s drive of the state. The transportation network in Tennessee includes access to eight interstates, 1,000 miles of navigable waterways, international and regional airports, and six Class I rail carriers.

The FedEx World Hub in Memphis, which covers over 880 acres, is the largest sorting facility in the world, handling up to 1.5 million packages every night over 42 miles of conveyor belts. The World Hub helped make Memphis International Airport the world’s busiest cargo airport in 2020.

Anchored by FedEx, which has its global headquarters in Memphis, Tennessee is a logistics powerhouse, home to 13,800 distribution-related establishments that employ nearly 231,000 workers. Major companies have set up logistics operations in the state, including Under Armour, Technicolor Home Entertainment Services, Peyton’s, Cummins Inc., Gap Inc., Walmart, FedEx, Nike, and Macy’s.

“You have the combination of great talent – both labor and skilled – great geography, and a business-friendly state,” says Shay Scott, executive director of the University of Tennessee’s Global Supply Chain Institute. “You can get into incredible levels of complexity as you analyze those factors more deeply, but at the highest level, I think the answer is fairly straightforward.”

Since 2017, the sector has generated $3.8 billion in new capital investment and created more than 15,000 jobs across the state.

In January 2022, outdoor gear retailer REI Co-Op announced that it would build a new distribution center in Lebanon. The 400,000-square-foot, state-of-the-art logistics facility includes industry-leading sustainability and technology features. It is expected to open fall 2023.

“We believe climate change is one of the greatest existential threats to our planet,” says Bill Best, REI’s vice president of supply chain. “We’re aiming for this facility to be net-zero energy, using 100% renewable energy.”

The facility’s technology is built around a “goods to person” approach. While most distribution centers work a lot like grocery stores, with workers wheeling around a cart from aisle to aisle to pick items, REI’s automated storage and retrieval system brings products to employees. REI will integrate the technology to serve both digital fulfillment and shipping to retail stores simultaneously.

REI sees sustainability, technology and customer service as operating in unison. That means the company’s new Tennessee location is more than a convenience.

Amazon continues to find Tennessee a destination of choice for logistics operations. The company, which has invested $13 billion in the state since 2010, announced four new fulfillment centers in 2020 and 2021.

“Tennessee is a great state for business, and we are excited to partner, grow and better serve our customers throughout this region.”

The company is also in the midst of building a downtown office complex in Nashville that will house more than 5,000 tech and corporate jobs, with an average annual salary range from $150,000 to $200,000.

Hiring has begun for jobs in the first of two buildings, which is 27 stories. The second, at 28 stories, is slated for completion in 2023. Together, they add up to 1 million square feet of office space and a direct investment of more than $230 million.

“We are excited to continue creating a positive economic impact in the region,” says Holly Sullivan, Amazon’s head of worldwide economic development.

A Logistics Hub in Chattanooga

When Ted Alling talks about the growth of logistics and transportation companies in Chattanooga, it sounds like he is trying to map an explosion as it’s happening.

“Per capita, we have to have one of the highest amounts of people in logistics and transportation in the country,” Alling says, rattling off names like Trident Transport, Taimen Transport and Tranco Logistics. The ecosystem includes FreightWaves, a logistics data and information startup that has quickly become the Bloomberg of the industry.

Then there are companies Alling has invested in like Steam Logistics, a 10-year-old company he says is on pace to book $1 billion in revenue this year, Reliance Partners, which has become the fastest growing trucking logistics insurer in the U.S., and Bellhop, a tech-driven moving service.

With three partners, Alling grew Access America Transport from a startup to a $600 million business before it merged in 2014 with Coyote Logistics. After that, he helped start Lamp Post Group, a venture incubator that nurtured startups in logistics and other industries, then Dynamo Ventures, an early-stage logistics venture capital fund that has become one of the largest VC funds in the Southeast.

“People understand there’s so much talent here that’s already trained,” Alling says. “There will be dozens more logistics companies started in Chattanooga based on how much talent and focus our community has in this sector.”