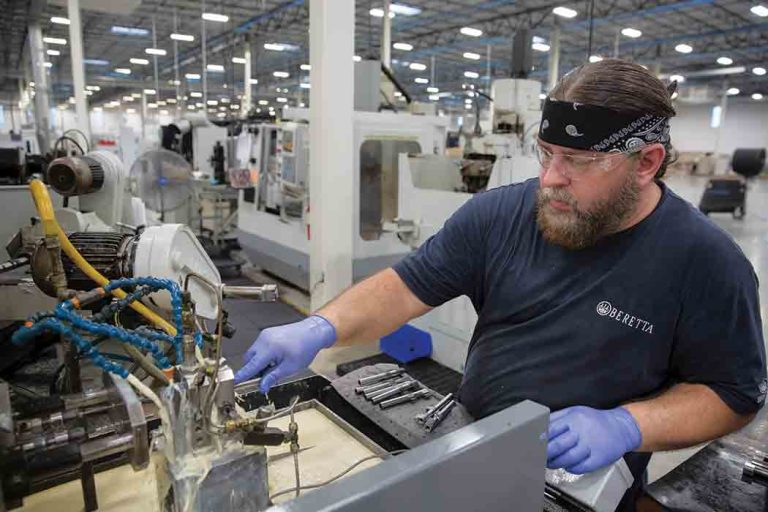 When business is spoken in Tennessee it is often with a global accent. The Volunteer State has achieved significant success in attracting foreign direct investment (FDI) projects, ranking first among states in the number of jobs created or committed by foreign-owned companies in 2015. It was the second time in three years that Tennessee topped the IBM Global Location Trends report, which analyzes where companies locate their operations around the world and what drives those decisions.

$33.3 billion in capital investment. Tennessee has attracted significant investment from every corner of the globe, including 183 Japanese-owned companies, the state’s largest foreign investor nation. More than 123,000 Tennesseans work for foreign-owned companies, which accounted for 30 percent of all new job commitments in the state in 2015.

The storied Italian gunmaker Beretta USA opened a $15 million firearms manufacturing and engineering center in Gallatin in 2016, adding more than 100 jobs. In 2014, the company announced plans to move all its manufacturing from Maryland to Tennessee and build a $45 million research and development facility for new gun lines.

Jeff Reh, a member of the Beretta USA Board of Directors, says one of the factors impacting the company’s relocation decision was the state’s governance and pro-business climate.

“There’s a clear sense that government perceives one of the important ways it can fulfill its obligations to its citizens – in terms of improving quality of life, education, health insurance, etc. – is by doing what it can to support business investment in the state,” Reh says. “In some states, business is perceived as a necessary evil; governments realize that citizens need to have jobs and gainful income, and they know that businesses are the means by which that’s accomplished. But the commitment to supporting businesses just isn’t there; it doesn’t pervade the government. In Tennessee, we don’t see that at all – in fact we see the opposite. There is strong support for business – business investment, business growth –  and enabling a business to be successful.”

Tennessee’s central location also played a role in location decisions. The ability to get to the new facility through international flights was important, a factor that drew the company to the Nashville area.

“But also the proximity of our location to UPS and FedEx hubs was important, as was our proximity to the interstate highway system, so Tennessee’s location in the United States places our facility very close – within a day’s drive – of 70 percent of our customers,” Reh says.

Location and logistics also led the Chinese ceramic tile company Wonderful Group to build a $150 million facility in Lebanon in Wilson County, the company’s first U.S. manufacturing facility. The investment will create more than 200 jobs. Wonderful Group adds to the state’s growing cluster of tile manufacturers and finishers with companies like the Italian-based Del Conca in Loudon and Tecnotiles Inc in Lebanon.

“Access to transportation services and suppliers of products, especially in the tile industry, made Wilson County attractive to the Wonderful Group,” Hixson says. “Also rail service availability and the close proximity to Nashville International Airport played a role.”

Value-added amenities, such as the Chinese Institute at Middle Tennessee State University and the recently signed Memorandum of Understanding concerning Korean and Tennessee driver’s licenses that allows both parties to exchange an equivalent driver’s license issued by the other party, have provided a welcoming atmosphere for foreign companies.

Tennessee’s enviable quality of life is also a lure for foreign corporations.

“Middle Tennessee is beautiful. The presence of streams and lakes and rivers and rolling hills and farmland was very appealing,” Reh says. “The nearby vibrant city of Nashville was also a great calling card. We know that some of our employees are going to want to live in an urban setting with all of the cultural benefits, such as the musical tradition, the museums and art galleries, and sports activities. Then some are going to want to live in a more quiet setting outside the city. Locating in Gallatin gave us the opportunity to offer both living opportunities.”