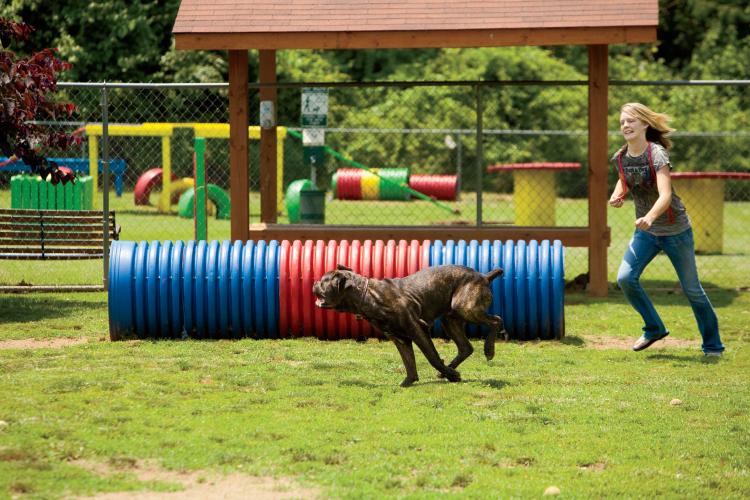 Dogs in Franklin have good reason to wag their tails these days. In April 2010, the City of Franklin opened a K-9 Korral dog facility in The Park at Harlinsdale Farm. The half-acre, fenced-in K-9 Korral allows dogs to run and play without a leash, and can accommodate 25-30 dogs at a time.

“Dogs must be 4 months or older because that’s when dogs start getting their inoculations – that’s really the only main rule we have for dog owners who use K-9 Korral,” says Anna Shuford, program director for the City of Franklin Parks Department.

The dog park was constructed in a former paddock area used for walking horses, and Franklin Parks Department staff members built the K-9 Korral themselves.

“The staff also installed a user-friendly water fountain with a large ground-level bowl inside the fence that dogs can use, while people who use the walking path at Harlinsdale Farm can use the regular part of the fountain outside the fence,” Shuford says. She adds that Franklin is planning another dog park on the other side of the city, at Liberty Park.

“Another rule we do have is if any city official asks to see a dog’s rabies tag, the owner would have to present it upon request,” she says. “But other than that, the dog park is all about fun and exercise.”

The dog facility is split into two parts – Maggie’s Bark Park for larger dogs, and Rascal’s Run Around for puppies and dogs that weigh less than 30 pounds. “Maggie’s opened in 2001, with money for the park’s fencing donated by people who volunteer with us and then scouts constructed agility equipment on the grounds,” says Debby Leddy, assistant director of the Williamson County Animal Control. “The 1-acre site has water fountains as well as kiddie pools for dogs to enjoy in hot weather.”