The fun is never done when it comes to exploring the vast array of outdoor play possibilities in Williamson County. 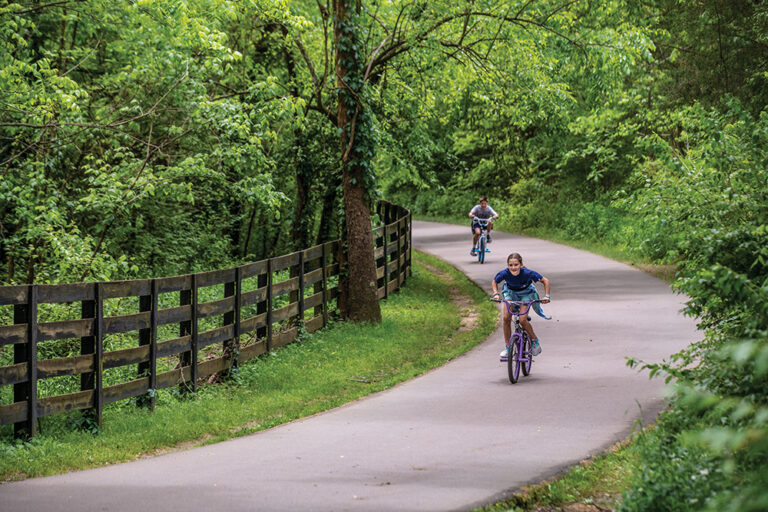 You can search high and low for recreation opportunities in Williamson County, and you’ll find enjoyable options at all the various heights.

You can walk beneath the trees along the county’s extensive trail system or rise above them on the 60-foot-tall SOAR Adventure Tower. You can hop in a kayak or canoe and glide along the Harpeth River through downtown Franklin or catch some air while topping a hill at Wilkins Branch Mountain Bike Park.

“Williamson County is a great place for outdoor recreation,” says Kevin Vanderkolk, who owns and operates the SOAR Adventure climbing tower with his wife, Colleen. “There are a lot of parks, some great running and bike trails. There’s really something for every age.”

Let’s start with the parks, a total of two dozen of them throughout Williamson County. There also are 15 recreation and community centers in the county. This includes the Robert Ring Indoor Arena, which is used by local soccer and flag football leagues. The arena also offers three hours of open play every weekday afternoon.

But the true beauty of Williamson County can be found out and about on the trails. There are numerous choices in the county, highlighted by the meticulously maintained Brentwood Trail System, a total of nearly 25 miles of paved surfaces spread out over eight city parks.

For an ideal family outing, David Henderson of Franklin Bicycle Co. recommends combining several trails for a 5-mile ride from the Brentwood Library, through scenic Crockett Park and on to the spectacular 400-acre Marcella Vivrette Smith Park (which is Brentwood’s largest park).

“For the most part, you’re completely off the roads, so it’s very safe for families,” Henderson says. “And it’s relatively flat. There are a few hills, but nothing bad.”

Other popular trail locations include Timberland Park off the Natchez Trace Parkway and the 772-acre Bowie Nature Park in Fairview, which features 17 miles of trails as well as pristine lakes and a nature center.

“You won’t get a lot of mileage there, but you can work on your skills,” Henderson says.

Of course, cyclists can always just head out onto one of the many scenic roadways that stretch throughout the county and showcase the region’s rural beauty.

“People flock from all over to ride on the roads in Williamson County,” Henderson says.

“There are all these rolling hills that go past horse pastures and barns. And drivers are used to seeing the bikes on the road every day, so it’s a little bit safer here.”

For a relaxing outdoor outing, there are several golf courses in Williamson County.

The most notable is The Grove, rated by Golf Digest as the seventh-best course in Tennessee for 2021-22. The Grove plays host to the Simmons Bank Open, an annual event on the PGA-associated Korn Ferry Tour.

The Franklin Bridge Golf Club is set on historic farmland near the Harpeth River. Plans are underway to add a 5,200-square-foot training facility on the property and possibly an eight-hole short course as well.

Meanwhile, it’s hard to beat the SOAR Adventure Tower for those who want a bit more thrill in their outdoor activities. This gigantic aerial park features 110 climbing elements ranging from 10 feet off the ground to 60 feet.

“You’re safely harnessed in, then you can scale from platform to platform,” Vanderkolk says. “Sometimes you’re walking across a skinny wire, sometimes across a bridge. You can hang onto a drone and fly about 25 feet and then catch the platform on the other side. There’s a huge variety of options.

“One of the great things about this park is you can create your own path. You can stick to the easy routes if you’d like. We even have a kid’s course on the bottom for as young as 3 years old. Each person gets to set their own course at their own pace. You can make it as adventurous or as relaxing as you want.”

The same can be said for recreation in general throughout Williamson County.