The Past Meets the Present in Williamson County

Sustainability, walkability and a nod to history are earmarks of development in Williamson County. 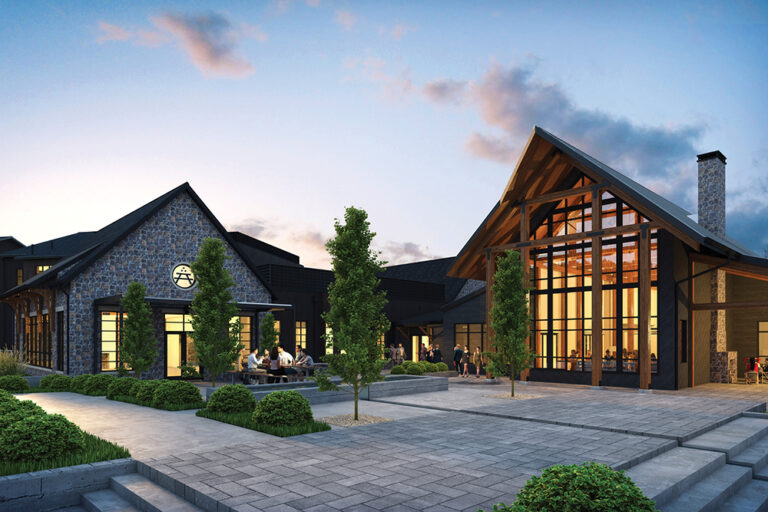 That can be seen in a number of significant developments taking place across the county. At one end is the massive mixed-use project known as June Lake in Spring Hill, one that will include an old-fashioned town center surrounded by a greenway and an 11-acre lake within a park. Farther north, The Factory at Franklin is getting a makeover that will stay true to its iconic history and more recent place as an important community center.

And just south of Franklin, a 325-acre “farm-centric” resort and spa called the Farm at Southall harkens back to Williamson County’s agrarian past while offering guests an immersion in sustainable agriculture. In addition to these three undertakings, Williamson County is replete with other cutting-edge developments and projects.

FirstBank Amphitheater, a 7,500-seat boutique entertainment venue, opened near Thompson’s Station in 2021. The transformation of the 50-acre Carothers Building campus in Cool Springs will create the East Works District, a pedestrian-focused, mixed-use community. In addition, the McEwen Northside mixed-use development continues to grow.

The Farm at Southall

Perhaps no development stands out quite like the Farm at Southall, which has been in the making for the past seven years when its founder, Paul Mishkin, discovered this land on Carters Creek Pike in the Southall community.

The farm is pursuing a sustainable facility while farming with best practices. Wells have been dug for geothermal heating and cooling. Heritage seeds have been planted. There is an orchard with more than 40 varieties of apple trees and two traditional greenhouses.

“Southall is a destination rooted in sustainability and stewardship, community and curiosity, as well as world-class hospitality,” says Craig Hoover, senior vice president for leasing and development for the property. “Williamson County’s awareness has been increasing steadily over the years and is evident in terms of population growth, tourism, global companies moving their headquarters and more. Southall’s opening will help further cement the destination as a place for exploration.”

Before it was converted to a retail and entertainment center in 1996, The Factory at Franklin had served as a working factory for stove manufacturer Allen Manufacturing Co. and other companies for 67 years. The real estate firm Holladay Properties purchased the complex in October 2021.

“What attracted us to it was the opportunity to bring new life into these old buildings,” says Allen Arender, the company’s partner and executive vice president of development.

Work on the complex’s interior will include renovation of what is known as the Grand Hall, with expected completion in early 2023. Plans for the exterior call for easier pedestrian access, more attractive and “green” parking areas, restaurants that include patio seating, and the utilization in the design of the Factory’s iconic features such as the water tower and the standing sculpture known as “Rusty.”

“The place already had such a great connection with the community,” Allen says. “It just needed that next step of new energy and new activity.”

Though it’s not a project focused on farming, June Lake is also being developed with sustainability in mind and an emphasis on nature.

“Walkability is very important to us,” says Don Alexander, project manager with Southeast Venture, the firm that’s developing June Lake. “We want people to be able to get outside and experience nature.”

Covering 775 acres, the development will ultimately include 2,900 residential units, 400 hotel rooms and roughly 5 million square feet of commercial office and retail. Negotiations have also been underway for June Lake to include an ice center in partnership with the Nashville Predators.

Alexander says great care is taking place to ensure June Lake will be a true representative of smart growth.

“When you’ve got a development of this size, all eyes are on you to make sure it’s done correctly,” he says.

June Lake by the Numbers