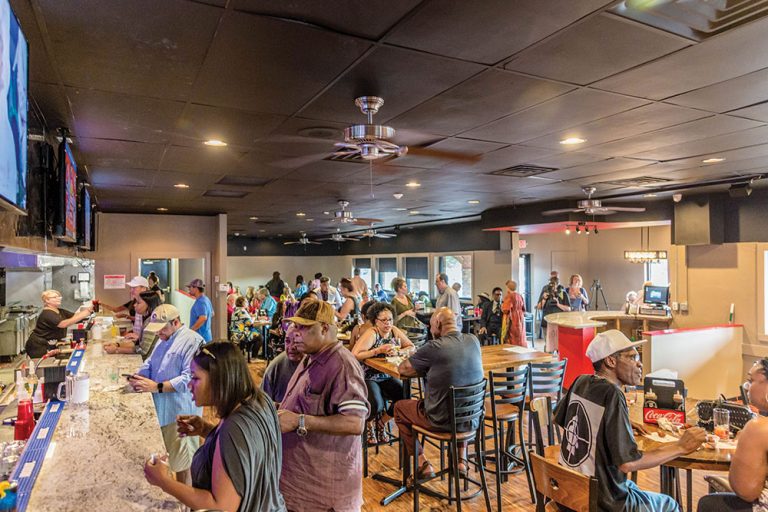 Dining in Jackson offers something for almost every taste, blended with the Southern hospitality that defines the region. Local specialties, such as barbecue, fried catfish and cracklin’ cornbread, abound, and the area is also home to fine dining and multicultural dining experiences.

Seizing the vitality of downtown Jackson, Baker Bros. BBQ opened on Main Street with the goal of “letting the pork speak for itself.â€ Baker Bros. uses sauces and rubs that accentuate, not overpower, the taste of its meals to create a unique West Tennessee barbecue. Live music and fish fry nights are also popular at Baker Bros.

The Blacksmith restaurant on North Shannon Street is housed in a building that, nearly 200 years ago, served as a livery and blacksmith shop where residents and travelershad their carriages repaired and horses tended. Today, The Blacksmith features a varied menu, with a focus on fresh and local ingredients, and includes its own twist on fried green tomatoes, Johnnycakes, a wide selection of salads and sandwiches, and entrees, such as grilled salmon and Black Angus steak. Visitors can enjoy live music year round inside its climate-controlled patio.

Jamaican and African Cuisine, located on Carriage House Drive, is providing a niche in the community with fresh dishes based on traditional African and Jamaican recipes; heaping plates of curry goat or chicken, jerk chicken, oxtail stew, red snapper, couscous and fried plantains; and to drink, ginger beer.

Another local eatery in a historic setting is Chandelier Restaurant in the Neely House on South Royal Street, which was built as the Murphy Hotel more than a century ago. Jackson’s newest fine dining destination offers innovative Southern cuisine and cocktails and serves dinner, lunch and a Sunday brunch that features items such as crab cake benedict and shrimp and grits. Chandelier also serves desserts, including its goat cheese dark chocolate brownie.

In Thomsen Farms on Union University Drive, Mulligan’s is a favorite watering hole that serves everything from specialty burgers and sandwiches to quesadillas, Irish pies and fish and chips. Along with its diverse menu, Mulligan’s is known for its live entertainment and drink specials.

Old Town Spaghetti Store, located on Carriage House Drive, is just as well known for its prime rib as it is the pastas and sauces that have made it a Jackson-area household name for 37 years. The menu has expanded many times throughout the years to include a wide selection of steak, chicken, seafood and salads, and today, Old Town is attracting second- and third-generation customers.

In Jackson since 2005, Picasso Bistro Pizzeria on Stonebridge Boulevard features an authentic stone hearth oven, which is the traditional Italian method of cooking pizza. It offers a diverse menu with unique and traditional pizza choices, salads, seafood, steak and a full bar with a dozen beers on tap. Picasso also is known for its support of local artists and art adorning its walls.

Rock’n Dough Pizza & Brew Co. began as a Memphis food truck before opening a brick-and-mortar restaurant in Jackson Walk Plaza in the heart of downtown. Rock’n Dough’s philosophy is “fresh and local,â€ and its dough and sauces are made in-house every day. Meats are smoked on-site, and the business brews core beers and special releases. The popularity of Rock’n Dough’s Jackson restaurant has led it to open additional locations in Germantown and Nashville.

After finding success in Jackson’s barbecue country, West Alley BBQ now has locations here on Vann Drive and in Chandler, Arizona. West Alley is known for its meat, which is cooked daily in an outdoor pit, piled high on plates with vinegar-based mild or hot barbecue sauce, and served with buttered Texas toast and a dill pickle. Other entrees include Southern fried fish and barbecued turkey. Live music is another popular feature at West Alley in Jackson.