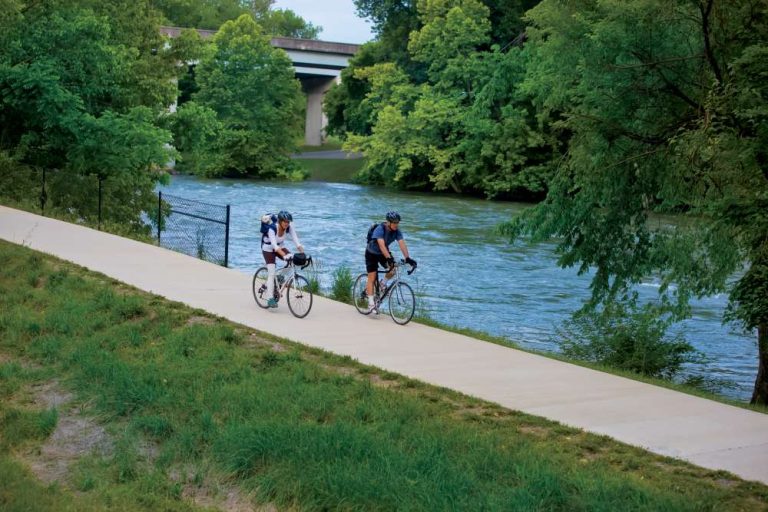 Living the green life in Kingsport is gaining momentum, with the city and such major employers as Domtar and Eastman involved in efforts to restore, preserve and/or improve Kingsport’s natural environment.

One such initiative is Keep Kingsport Beautiful, a campaign to involve the community in responsible solutions for a clean and scenic local environment. Efforts of this city/chamber campaign include reducing litter, promoting recycling, encouraging beautification and increasing public awareness through promotion.

“We are an affiliate of both Keep America Beautiful and Keep Tennessee Beautiful and have won national and state awards,â€ says Robin Cleary, director of Keep Kingsport Beautiful. “One key effort is going into area schools to talk to young students, catching them at an early age to alert them about environmental responsibility and sustainability.â€

Cleary says environmental achievements in the community include establishing an 9-mile-plus Kingsport Greenbelt that is ideal for runners, walkers and bicyclists. The city has also earned Tree City USA designation for nearly 30 consecutive years.

“We host tree plantings twice a year in the spring and fall, and Kingsport actually has a city landscape manager, Lewis Bausell, who has a degree in landscape design from the University of Tennessee and coordinates our whole Tree City USA with the Arbor Day Foundation,â€ she says. “The city also has a Kingsport Tree Board to focus on this initiative.â€

Conserving Forests and the Holston River

Along with the city’s efforts to promote environmental sustainability are initiatives from major employers like Domtar and Eastman. Domtar celebrated its 100th anniversary in 2016. Conservation achievements at its Kingsport mill, which produces 420,000 tons of paper and 300,000 tons of pulp annually, netted a Governor’s Environmental Stewardship Award for the company’s voluntary solid waste reduction efforts.

Eastman, which makes a variety of plastics, fibers and chemicals for products to improve people’s lives, spends more than $100 million a year in Kingsport on environmental compliance. In fact, Eastman has spent more than $675 million just in Kingsport over the past five years.

“Eastman was interested in sustainability before sustainability was even a word,â€ says Hanneke Counts, Eastman vice president of global health, safety, environment and security. “A major focus of our environmental efforts is helping to improve the water quality of the Holston River, which flows adjacent to the Eastman manufacturing facility.â€

Counts says Eastman uses a third party, the Academy of Natural Sciences of Drexel University in Philadelphia, to monitor the health of the river, which includes overseeing plants, algae, invertebrates, insects, fish and the chemistry of the water quality.

Why 100 Years of Kingsport, TN is Only One Reason You Should Visit

“Back in 1965, there were only three species of fish living in the Holston River, and today there are 29 species,â€ she says. “Now you’ll see people fishing right alongside the plant and using the river for various recreation activities.â€

Besides its efforts with the Holston River, Counts says that Eastman is converting its five coal-fired boilers to natural gas in order to significantly reduce its emission rates. The first conversion occurred in 2014, two more in 2016, and the final two by 2018.

“Today, there are more than 75 environmental professionals in the company’s Global Environmental Affairs Group,â€ she says. “Environmental responsibility remains a priority because thousands of our employees not only work in Kingsport, but they live here, too.â€