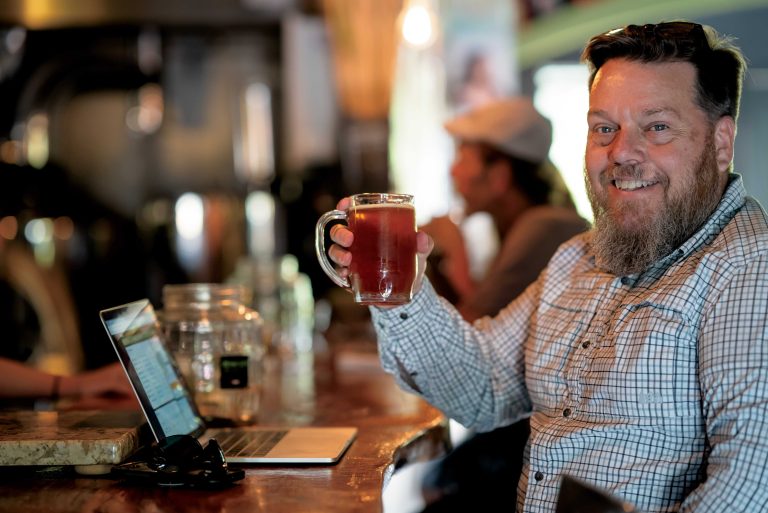 Kingsport is attracting new residents and keeping long-timers happy and safe. And tails are wagging, too.

A good symbol of the welcoming and warm atmosphere is the Barking Lot dog water fountain, which crystallizes just what is happening in this city through which the south branch of the Holston River flows.

The Barking Lot, run by the Downtown Kingsport Association, is one of two dog parks in the city and is noteworthy because it helps in the resettlement of downtown, says Lynn Tully, Kingsport development services director, whose job with the city has her working “in everything from building codes to planning to economic development to community block grants and a little bit of everything else.â€

The city center is being bolstered by millennials moving into the 100 or so lofts in restored historic downtown buildings as well as by those who will choose the Town Park Lofts, a 262-unit development taking the loft concept into the future.

“We wanted to capture that [millennial] demographic. We want people to put roots down in Kingsport,â€ she says. “Young people who are attracted to the city by its professional opportunities often are crazy about their animals, especially their dogs. Even if you live in a loft, you can still have a dog [and] let them have a place to run and play.

Many downtown restaurants and tap rooms have al fresco opportunities where people can be with their dogs, stop for a drink or a meal, and their four-legged pal can get a bowl of water.

And of course it’s not just millennials who love their pets, are looking for a safe and affordable place to live and want walkability along with fun things to do. Kingsport is seeing its share of older people, particularly military and public safety retirees, choosing the city as a place to stretch their legs and their pension dollars, too.

Neighborhoods near downtown with older bungalows and other mid-20th century construction are seeing the benefit of population growth, as well, Tully says. When younger residents look to move from lofts to larger spaces, they are choosing to buy older houses that have been overhauled already or in need of some TLC and restoration.

And not all of the change is happening downtown, either, Tully says, adding that she expects to see more development soon in the Fort Henry Mall area. She says the mall, like so many across the U.S., had all but closed until new developers and businesses came in with fresh ideas and energy.

“[Increased] housing availability is one of the things that has happened in the last couple of years, with 700 units being either under construction or complete,â€ Tully says, adding that this growing diversity of real estate options is key to moving the city forward.

Of course it takes more than lofts and dog parks to attract and retain people. There have to be options for entertainment and dining, and Kingsport’s variety of both is something that keeps 32-year-old Jonathan Taylor engaged in his city.

Taylor is a team member of Sleepy Owl Brewery, a brewpub that features a rotating selection of brews crafted from more than two dozen recipes. Taylor admits his bias in saying microbrews have become one of the hallmarks of any community to which young professionals flock and in which they flourish.

The brewery gave him a place to land after extensive touring as a musician.

“One thing about Kingsport is that you can go any place, but when you come back, you know it’s home,â€ Taylor says. In addition to his own brewpub and a few taprooms and restaurants sprouting up around downtown, he also lists the city’s greenbelt as a favorite destination. It isn’t just a place to hike and gaze at daisies and the like, he says, but a popular spot for cycling due to its flat, level surface and winding route through the entire town. Another natural attraction he recommends is the city-owned, 3,500-acre Bays Mountain park for mountain biking, zip lining, wildlife watching and more.

City of Kingsport Marketing Director Heather Cook says she loves the product she’s “selling” and is happy to see the demographic the city is attracting.

“Researchers are telling us that seniors with disposable income are retiring, and Kingsport gets its share,â€ she says, adding that the other growth segment is with millennials who are attracted to downtown’s walkability among other factors. “It’s empty nesters and young professionals.â€

There is plenty to see and do for all ages, of course. Cook and Tully list popular places and events such as Carousel Park (named for the locally carved merry-go-round), the farmers market, the community’s huge, annual nine-day Fun Fest celebration, plus a host of smaller festivals and other outdoor events as great options for mingling with neighbors and getting a sense of the “Kingsport Spirit.â€

The city’s greatest asset, Cook says, is its people.

“We have good people who say ‘Hi!’ to you every day,â€ she says.