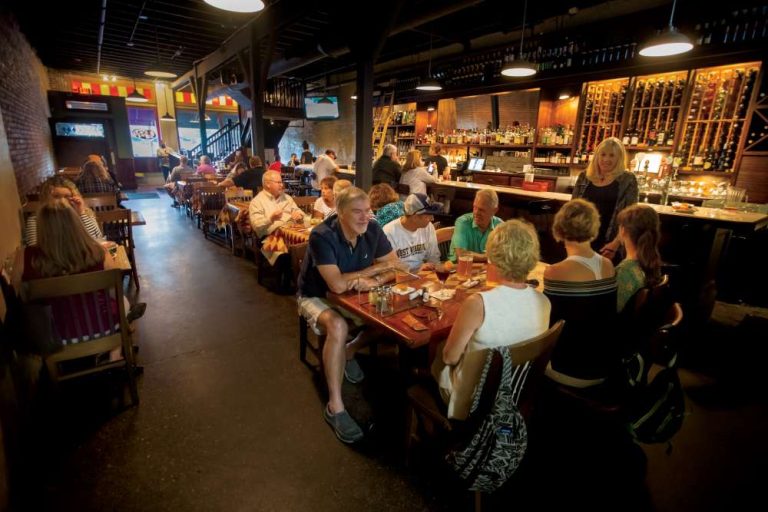 Kingsport’s dining scene is packed with locally owned restaurants that offer quick bites, unique dining experiences and everything in between. Plus, the community’s eateries cover nearly every food genre, so there’s practically no craving that can’t be quelled.

From New York to Kingsport

Located in downtown Kingsport, The Bagel Exchange opened in October 2011 after New York native Keith Cunningham moved to the community and realized something was missing – bagels.

Cunningham relocated to Kingsport with his family in 2010 after retiring from a 20-year-long career with the New York City Police Department. He says he missed his hometown’s bagels so much that he decided to open his own bagel shop in hopes that locals would embrace his favorite food. Six years later, it’s clear he made the right choice, with Kingsport residents packing The Bagel Exchange for both breakfast and lunch.

More fun things to do in Kingsport

The two-story shop serves breakfast and lunch, offering fresh-baked bagels in a variety of flavors created using dough shipped from New York. They can be had alone, with gourmet cream cheese or as bagel sandwiches loaded with deli meats and cheeses.  According to Cunningham, the most popular menu items include the No. 1 – known as New York’s Finest, which includes smoked salmon, plain cream cheese, capers and red onions served on an everything bagel – and the No. 3, nicknamed The Chief and featuring hot pastrami, melted Swiss cheese, sauerkraut and thousand island dressing served on a multi-grain bagel. The Bagel Exchange also serves muffins, cinnamon buns and scones.

Grab a slice at Main Street Pizza Co. in downtown Kingsport, where gourmet pizzas and pasta dishes are made from scratch daily. Jamie Dove, who opened Main Street Pizza Co.’s Kingsport location in 2015, also owns River Creek Farm in nearby Limestone, from where a sizable portion of the restaurant’s ingredients come. In addition, River Creek Farm offers CSA shares that can be picked up at the restaurant weekly, biweekly or monthly.

“The quality of our products sets us apart,” Dove says. “As an organization, we source more local food than any other restaurant or restaurant chain in the Tri-Cities area. Between what we grow at River Creek Farm and what we purchase from other farmers in the area, a huge amount of locally grown food passes through Main Street Pizza Co., and you can taste the difference in our food. Plus, everything on our menu is made fresh every day.”

Another favorite downtown Kingsport pizza spot is Chef’s Pizzeria, which has served the community since 1991 and is owned by Steve and Trida LaHair. The restaurant’s menu features pizza, calzones, subs and salads, and it offers a soup, salad and potato bar that’s open during lunch hours.

When it comes to authentic Italian food, brothers Ralph and Michael Misciagna have the community covered. The duo own three restaurants in Kingsport including Italian Village, a casual pizzeria that opened in 1978; Giuseppe’s Italian Restaurant, a fine dining establishment open since 1987; and Raffaele’s Italian Restaurant, offering pasta, pizza, calzones, Stromboli, sandwiches and salads since 1993.

Dine In or Prepare at Home

The restaurant opened in 1991 and owned and operated by Wayne and Angie Michelli and their daughters, Ashley and Jenna. The expansive menu features seafood entrees like salmon, tilapia and sea scallops – all served with a side item and hushpuppies – plus plenty of options for non-seafood eaters, such as grilled pork chops, chicken tenders and steaks. There’s also a top-notch dessert selection that includes a highly recommended blackberry cake topped with bourbon vanilla cream cheese icing, as well as choices like key lime pie and bread pudding.

In addition to their menu items, Riverfront Seafood Co. is known for offering gorgeous views, and many diners opt to sit outside and take in the scenery during warm-weather months.

For more must-try local flavor in Kingsport, consider the vast menu (burgers and milkshakes to steaks and ribs) at The Purple Cow. Call ahead, as it’s a drive-thru only, but the line is worth it. For delicious barbecue and much more, try Pratt’s Real Pit Bar-B-Q and Catering. The fried chicken is a must a Nick’s Family Restaurant, a local family tradition since 1938. Another don’t miss dining destination is Woodstone Deli, where the burger has been voted “best in Kingsport.”