Eastman Field opens for people of all abilities. 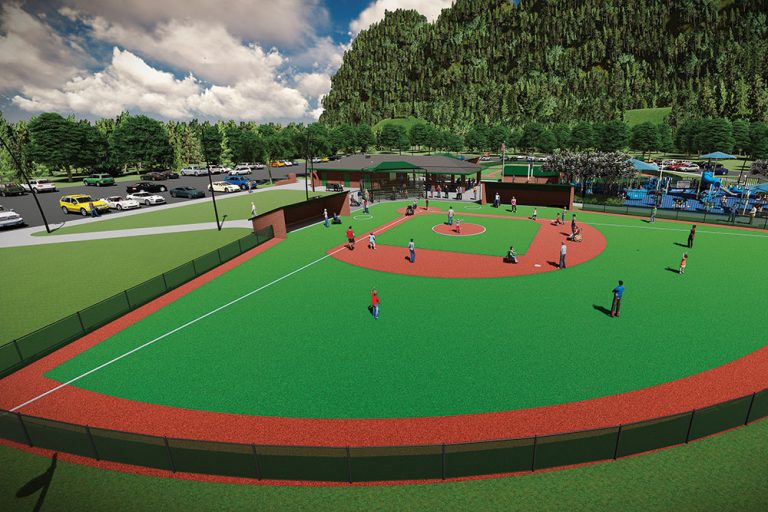 A new $2.8 million Miracle League Field, now known as Eastman Field, opened June 1, 2020, at Brickyard Park in Kingsport so people of all abilities can enjoy the game of baseball. The project was spearheaded by Visit Kingsport Executive Director Jud Teague, a former baseball coach whose son, Nicholas, has Down syndrome.

“About five years ago, I saw such a field in Minnesota when I was traveling with my job, and I brought the idea back to Kingsport in hopes of building a Miracle Field here,â€ Teague says. “Originally, the Kingsport board of mayor and aldermen said they would contribute half the money, but it has grown to more than that initial agreement.”

Teague says organizers traveled to Cincinnati, Chattanooga, Minnesota and Missouri to see those Miracle Fields so the Kingsport group could put the best practices into their own complex.

“Included in Kingsport is a 10,000-square-foot, $400,000 playground for special needs children, and a 5,000-square-foot pavilion is also on-site where parents can watch the baseball field and playground at the same time,â€ he says. “The green baseball field is weather resistant and can be dried within an hour if it rains, and it features a flat rubberized surface to accommodate amputees, wheelchairs and walkers. We welcome special needs players of any ability.”

The entire complex is sponsored by Eastman Credit Union; the baseball league by Niswonger Children’s Hospital; the playground by BlueCross BlueShield; the pavilion by Citizens Bank; and the LED scoreboard by Pal’s Sudden Service.

“We tried to think of everything for the complex, including showers in the restrooms in case of an accident by a child,â€ Teague says. “We’re already planning a Phase II for another field and a soccer facility.”

Among the Best in the Nation

Teague says baseball games last two innings and take about an hour to play, with every player announced with a walk-up song when they come to bat. Most players hit off a batting tee, while others hit off of coach pitches.

The league is anticipated to feature four to five divisions that are split into age groups, with players as young as 4 years old all the way up to senior citizens.

“We are projecting about 2,000 special needs players will be signed up within about four years, and the league serves everyone within about a 100-mile radius,â€ Teague says. “In the beginning, we expect 40-50 players to show up for our weekend sessions, but that number will significantly grow. The Kingsport complex is already among the best Miracle Fields in the nation.”

There are currently more than 300 Miracle Field leagues (including ones in Australia, Canada and Puerto Rico) that serve about 200,000 children and adults who have special needs. For more information, including a video, go to visitkingsport.com/kingsportmiracle-field.

If you’d like to learn more about the Kingsport area, check out the latest issue of Livability: Kingsport, Tennessee.