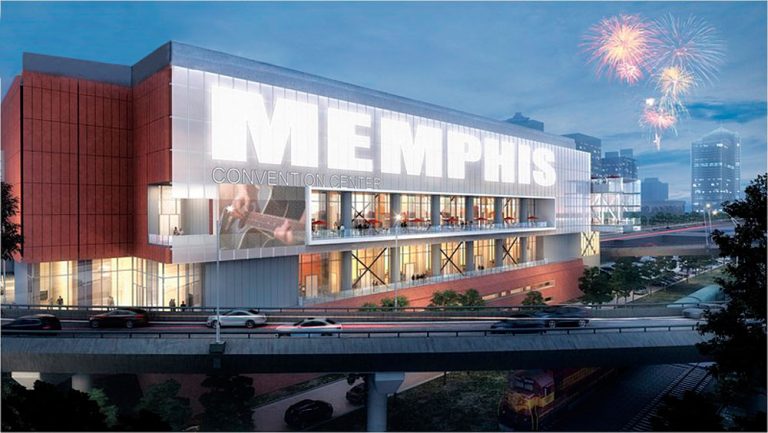 More than 10 million people visit Memphis annually, and officials with the Memphis Convention and Visitors Bureau and Memphis Management Group say that number will increase once a major renovation and expansion of the Memphis Cook Convention Center is completed.

The impressive building on North Main Street in downtown Memphis is undergoing a $175 million transformation that began in early 2018 and will wrap up in October 2019 (to coincide with the city’s bicentennial year). Funding for the project is generated by the city’s hotel lodging tax and funds from the Downtown Tourism Development Zone. The convention center remains open during construction.

Upgrade highlights include adding outdoor terraces, glass-enclosed entrance concourses and meeting spaces that overlook the Mississippi River and Memphis skyline. A new grand entrance on the building’s east side will offer convenient access to the 600-room Sheraton Memphis Downtown Hotel and the Main Street Trolley transit station across the street. In addition, a new sky bridge will span across Main Street to connect the convention center with the Sheraton.

Also planned are lavish underground parking entrances to provide guests with an enhanced sense of arrival, and the parking deck’s capacity will be expanded. The loading dock area will increase to five permanent docks to accommodate 18-wheelers loading and unloading equipment for trade shows, concerts and other events.

Officials point out that the hospitality and tourism industry in Memphis supports more than 35,000 tourism-related jobs, and the 10 million people who annually visit the Bluff City generate more than $3 billion in expenditures.