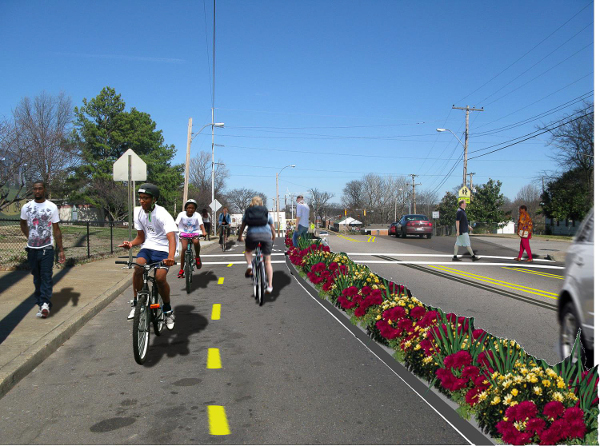 When the the nonprofit organization Broad Avenue Arts District wanted to build the Hampline – an innovative new bicycle connector in the Binghampton neighborhood of Memphis, Tenn., – the group turned to the Internet to raise the necessary funds.

Using the website ioby.com, BAAD tapped into a growing trend of using crowdsourcing (or crowdfunding) to fund community projects.

“We went the crowdfunding route for a variety of reasons. One of the most important for us was to really gain the public’s support and awareness about the Hampline, and we used the $75,000 crowdfunding and six weeks to create buzz and educate the public that this exciting and innovative bicycle track was going to be built in their backyard, and really get that community buy-in through crowdsourcing,” says Sara Studdard, coordinator of Creative PlaceMaking for the Broad Avenue Arts District.

Studdard says the bicycle connector will also help with the economic development of the neighborhood.

“Studies have shown that people who are biking past retail storefronts and restaurants are more likely to come, whether it’s back on their bike or in their car, to visit and spend their dollars locally,” she says.

The Hampline is one example of a growing list of crowdfunded projects that includes a program in Chicago sponsored by the nonprofit group Windy City Hoops to keep inner city teens off the streets and a $4.5 million skateboard park in Philadelphia. Online platforms, such as Gofundme.com, Kickstarter.com, Neighbor.ly, and ioby.com are successfully connecting local donors with local projects in need of funding.

“There are a lot of nonprofifts who find fundraising to be a really tough task. It’s really hard to get people behind projects even if they do seem great and really well deserving, and crowdfunding offers a way to communicate potentially with a much bigger audience and be able to accept donations from anywhere, so that’s a great opportunity for civic organizations,â€ says Rodrigo Davies, a former Stanford University researcher who has studied crowdfunding extensively and is currently head of product at Neighbor.ly.

“I think a lot of cities, particularly in the U.S., have faced budget difficulties, so we’re seeing a lot of cuts to public services. And I think in some cases, communities are seeing their services cut, and they don’t have much prospect of the government investing there, and so they’re trying to compensate for that by crowdfunding certain civic projects.”

Studdard says even though the group’s approach to funding was unconventional, their marketing strategy still utilized some pretty conventional methods.

“We had expectations that it would be a lot of work but also a lot of fun. This was the largest campaign that our team had done in terms of crowdsourcing and that ioby had ever done,” she says. “We got strong partners in Memphis that were able to not only promote the campaign through their social and community networks, but also put up dollars to match donations and incentivize people to give.”

Construction on the Hampline is expected to be completed in spring 2015, and Studdard says she hopes the success of the project will encourage more community groups to use crowdsourcing to fund their initiatives.

“I think it really shows that neighbors and community members do have power to make small changes,” she says. “If they see that if they want a community garden in their backyard, and all they need is $500 or $1,000 that there’s this platform they can use to make it happen on their own.”