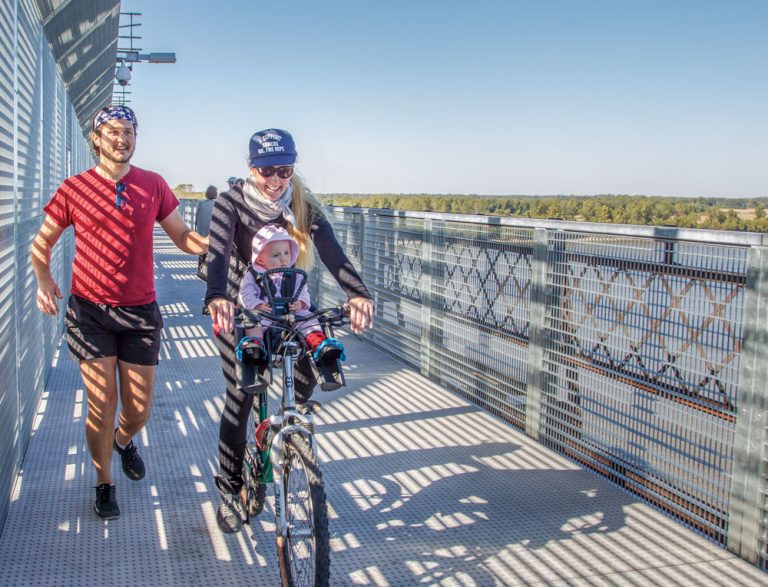 Searching for a place that’s perfect for outdoor enthusiasts? Look no further than Greater Memphis.

The region’s brief, mild winters and average annual temperate of 62 degrees make it possible to enjoy an alfresco lifestyle virtually year-round. And, the region offers plenty of fun outdoor destinations from which to choose – like parks, golf courses and more than 60 miles of bike lanes, off-road trails and protected pathways.

Plus, many communities in Greater Memphis offer quick access to recreational opportunities, making it even easier for residents to get active.

Memphis lays claim to one of the largest urban parks in the nation, Shelby Farms Park, which spans 4,500 acres and is five times the size of New York City’s Central Park.

Recently receiving $70 million worth of improvements, the park features more than 40 miles of paved trails and wooded paths – including the Shelby Farms Greenline that connects Midtown Memphis to Cordova – along with more than 20 bodies of water. The 80-acre Hyde Lake is perfect for paddling and fishing, and the Woodland Discovery Playground was included on Mental Floss’ 16 of the Coolest Playgrounds in the World list in 2015. A fairly new addition to the park is the FedEx Event Center, located next to Hyde Lake. The center offers more than 7,200 square feet of flexible space for events like weddings, social galas, holiday parties and corporate meetings.

Big River Crossing, a new pathway on the historic Harahan Bridge, is the longest public pedestrian bridge across the Mississippi River. Stretching nearly a mile in length and offering breathtaking views of downtown Memphis and the surrounding area, Big River Crossing is also the country’s longest active rail/bicycle/pedestrian bridge, and it conveniently connects Main Streets in Memphis and West Memphis.

The Wolf River Greenway runs along the south side of the Wolf River through the 150-acre Wolf River Nature Area in Germantown. The greenway will eventually extend a total of 36 miles, connecting the north end of Memphis’ Mud Island to Germantown and Collierville and passing through the neighborhoods of north central Memphis and Shelby Farms along the way.

“Over the last decade, Memphis has reimagined itself by transforming its public spaces,â€ says Jen Andrews, CEO of the Shelby Farms Park Conservancy. “From Shelby Farms Park to the [Shelby Farms] Greenline, to Wolf River Greenway, to Overton Park and Big River Crossing, to the burgeoning work on the riverfront parks, Memphis has developed a network of great parks, trails and public spaces. Parks are about much more than recreation. They help people stay healthy, they increase livability and property values, and they build strong communities. Parks bring us together, literally and figuratively, on common ground with shared values.â€

Another top spot for those seeking an active lifestyle is the Memphis Medical District, which surrounds the Regional Medical Center and is situated between Memphis’ downtown and midtown areas. Home to more than 10,000 residents, this walkable and bike-friendly community features a variety of urban parks, including Health Sciences Park and Triangle Park, along with an off-leash dog park.

Along with the Wolf River Nature Area, Germantown is home to nearly 30 parks that cover more than 750 acres and include biking and walking trails, sports complexes, special facilities and other green spaces.

Marie Lisco, economic development manager for the City of Germantown, says the community’s many parks reflect the Germantown Parks and Recreation department’s goal of placing recreational and leisure opportunities within a half mile of every home.

Lisco also mentions Germantown’s active cycling community and notes that all public elementary schools in the city are accessible by bike lanes from surrounding residential neighborhoods. In addition, she says city leaders are committed to creating even more ways for residents to easily make their way around the community on foot or by bike.

“As part of Germantown Forward 2030 – the city’s plan for social, environmental and economic sustainability – strategic objectives include improving walkability in Germantown’s Central Business District and becoming a regional leader for enhanced access and mobility for all forms of transportation,â€ Lisco says.